A hunt from the past.

I'm getting some real cabin fever here right now. I've seen more of the couch, this chair, and the bathroom than I have in the past five years. The dogs spend most of their time laying beside the couch with big sad eyes staring at me. So I'm looking back through my hunting journal's and remembering hunts from the past. This one was from Jan.25, 2009.

My dad passed away on Jan.24, 2009 and with family all there and five sisters that wanted to take charge of the next weeks proceedings, I asked my brother, Tom, if he'd like to go on a chukar hunt the following day. It sounds kind of cold but I knew dad would have been fishing the day after if I had passed away to celebrate my life. That's what he loved to do. He hunted some but would rather have a fishing pole in his hand.

So, on Jan. 25th, Tom and I took a trip over to Oregon with my only dog at that time, Riley, and chased some birds in reverence to dad. I had a special spot that Riley seemed to relish even though it was very steep with more sage than most of my chukar hunting areas. Riley was such a tall dog I could keep an eye on him in this country even with the taller sage. 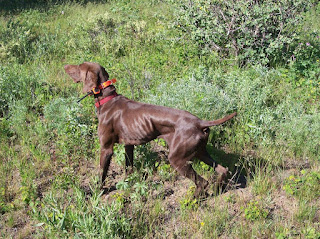 It wasn't long before we were into birds and it was great watching my brother walk in on points and shoot birds. I think it was Tom's and my last chukar hunt together. He likes chasing the elk with a stick and string more than chasing dogs. There was lots of good work and some good shooting but there was one event that will stick out in my mind forever.

As we walked the side hill looking for Riley we tried to pay homage to dad by talking about some of the fun things we had done with him in the past. As my receiver said Riley was on point, Tom and I went into hunting mode and approached his point. At the flush we hit two birds that dropped between us and crippled another  which flew around the hill and uphill out of sight. Riley retrieved the first bird right off the bat but spent some time finding number two with Tom doing some directing. We had to drop down in elevation some by the time we found the bird. We figured to stay at that elevation, knowing that going back and searching for a cripple that we had no idea of where it finally went down or  how high it got. Along with all the thick sage we figured it was a lost bird.

I'm guessing 20 to 30 minutes had passed before we resumed hunting. We kept our elevation and it wasn't long before Riley had found another covey, but he was 200 yards ahead of us. I was walking a game trail and about half way to the point a bird rolled out of the sage and landed on the trail in front of me. It was stone dead. I halted Tom and told him of the bird. It was a bird we would never find because we wouldn't be coming out that way. We both chuckled about it and told dad "thanks for finding that one for us".

We all have those special moments, and that was the last special moment for Dad, Tom and me together.
Posted by Tuckers Chukars at 12:45 PM

Glad you have those memories with family. My Dad and I shared a lot of hunts together.I always promised him donuts and coffee. Hope all is going well with your recovery. All the Huns seem to be paired up,took Gracie out yesterday,great weather. Larry is headed back to Alaska tomorrow,he finished his quail hunting in New Mexico and stopped in yesterday. Take care.Got my eye surgery out of the way,no more excuses for my poor shooting now.
Alan and the setter

Larry, I'm really sorry to hear about your accident. As a forester working in the private sector, I've known about many dozens of logging related injuries and personally knew nine men who were killed in the woods work. They all risked injury every minute of the work day but most just got careless one time. My grandfather failed to look up after felling a tree and a falling dead limb was fatal.

I hope you will have the patience to listen to your doctors in recovery and rehab!!! Don't go beyond their recommendations. Let the dogs get fat and out of shape. Your leg is more important than pleading looks from the shorthairs to take them out for a run.

I look forward to hearing about your full recovery and successful chukar outings next season.

Alan, Thanks for the bird report. You can use your eyes for an excuse for one more year. Your brain just isn't used to seeing so well and your reactions are too quick now. Don't forget, your talking to chukar hunters and they'll fall for almost anything.

Cliff, you hit the nail on the head. I've cut well over 200 cords of wood which sometimes involved falling trees but this time I just got careless. Thanks for the words and I hope the dogs and I get to see you on the mountain some time.