It's been about three weeks now, since I've been doing any reel hiking in the chukar hills. I've been a little under the weather and the heat has beaten me down. But todays forecast told me to get up early and head west. It's August 11th and we're having cooler temps, overcast skies and a possibility of rain. It all happened and Riley and I were out on the hill early. We both got wet and enjoyed every minute of it.
The day started with a busted covey of maybe twenty birds. They were at least eight weeks old and flying hard. Not long after that Riley pointed another covey. These birds were even more mature than the first group. I could see some of the bar feathers that the chukar is famous for. A very early hatch indeed. All in all I saw seven different chukar coveys that ranged from six or eight birds to as many as twenty per covey. The ages went from maybe a week old to 10 to 12 weeks old. This should show us all how adaptable the chukar can be to weather and other conditions. If you look hard you'll see a baby either under her or around her in each of these pictures. 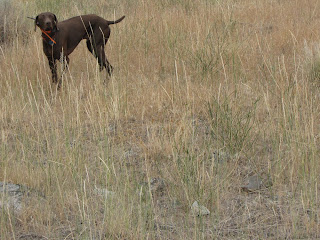 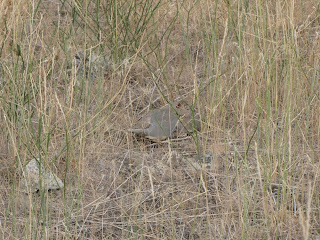 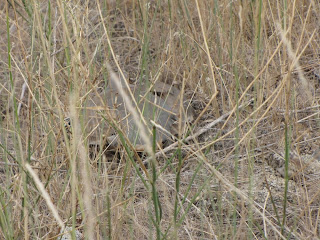 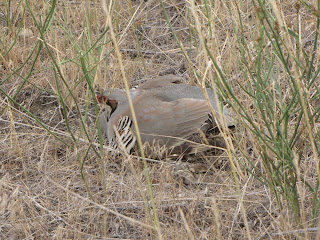 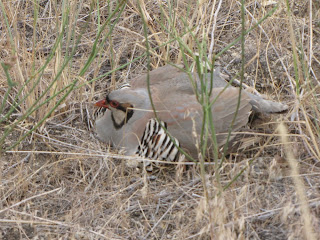 Most of the pictures I took today weren't that impressive but this mama gave me plenty of shots while Riley was on point. When she finally flew there were probably 15 babies under her and around her. Those are great numbers for a late hatch. 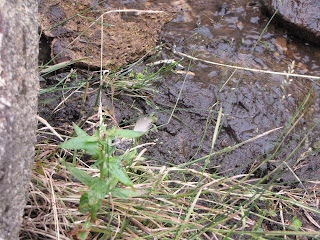 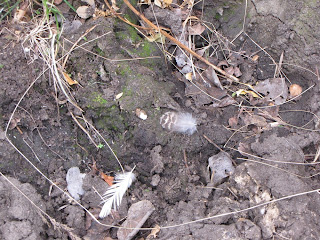 Also, almost every seep or dried up seep had chukar droppings and/or feathers.
Boy am I getting stoked for the cooler damp weather. The area I was scouting was *^#"@?/$. Damn, this computer just won't spell that for some reason.  Hope everyone is having as much fun as me.
Posted by larry szurgot at 12:01 PM No comments: