Well it's almost time. Grouse season opens in 8 days and chukar season in 23. Yesterday Grady was at the vets getting his clacker's removed so we're through running the mountains for a week or so to give him time to heal. Jake and I decided the best way to keep Grady calm today was to take him on a road trip and what a successful trip it was. We headed for a spot pretty familiar to all of us and as you can see there was a lot to see and Grady wanted to get out and do his thing. Jake just sat there and enjoyed the scenery knowing that we have never hunted from the truck before so why get excited.

This was our last scouting trip of the year and the video and some pictures is just a fraction of what we saw so now it's up to you as to what you think the season will be like.

Grady still hasn't had a scent point but has had several sight points on grouse and we're not going to let him run hard again until grouse season begins so we're hoping for the best. Jake, of course has been finding plenty of birds and sometimes seems to be able to find bird scent in a field covered with perfume. I'm hoping in about a month I'll be able to report that Grady's nose is like a magnet to bird scent and his point is rock solid but if not we're lucky to have such a long season to work on it.

I'm hoping you guys let me know when you're heading this way and we can swap some stories. I've got the same camper and truck and hope to be all over southwest Idaho and southeast Oregon. It's pretty obvious the chukars have done well (my preference of bird to hunt) but it seems like almost all of the upland birds did well this spring. I'm even seeing more pheasants down closer to the farm lands. 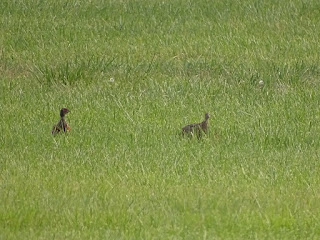 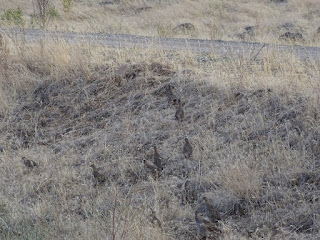 and a person might be able to come up with a double limit (8 huns and 8 chukar) this year. one of the great opportunities Idaho offers. 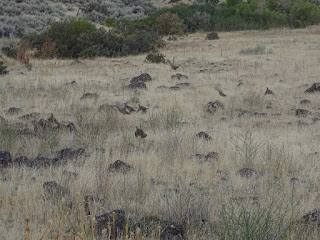 And if you're lucky you can add a few quail to your game bag because it also looks like a super year for them. 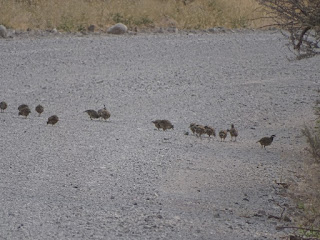 These video's and pictures were taken on a 2 hour drive once I got into hunting country so you can imagine what I might have seen if Grady had been up to taking a hike. I can't tell you how excited I am for some cool and wet weather.

Weather permitting, I'll be out on the 30th chasing grouse and will try and get four or five trips in on them before the chukar season begins and than once again weather permitting I will be out chasing them as often as possible. Being retired and within a couple of hours of almost all of the area's I hunt makes it a lot easier to stay home on those bad days. Good luck and be safe this season.
Posted by Tuckers Chukars at 11:17 AM 6 comments:

With this super hot weather we're not getting much mountain time but the little we're getting is producing some birds. Grady knows what we're out there for and is searching hard but has yet to scent point. We've had some sight points on grouse and he has a beautiful point. He's got the retrieving down and is used to gun fire so all we have to do is put a point with a downed bird after the shot and from that point it will be just time in the field to make him a good hunting companion.

There were probably close to thirty young chukars in both of these video's all though I didn't get most of them with the camera. The few times we are getting out right now is just for an hour or so first light. The temps are still in the 60's at that time and the dog's sneeze a lot but it's better than sitting at home. The high was 107 today and supposed to be the same for the next two days so we won't be doing any training or scouting. Also we are seeing more birds from the roads than usual so if we don't burn up we're still looking real good. Huns, chukars, quail and grouse all are looking good. There are even birds in the burn. 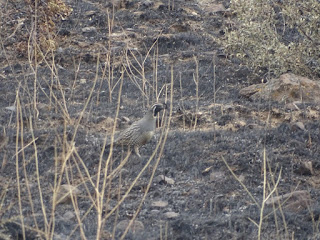 Just a small sample of what we are seeing on the road. 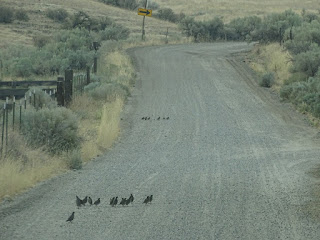 They usually get off the road before I can get the camera but these chukars are pretty much a common sight this year. 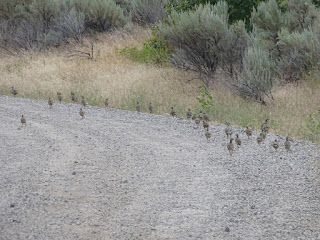 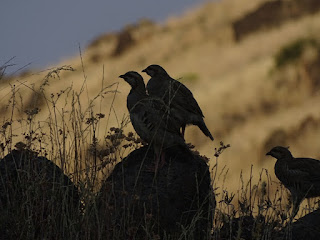 while this young quail was very interested in finding out what I was. 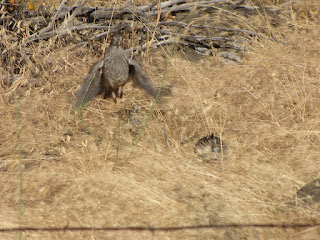 These birds were a later hatch 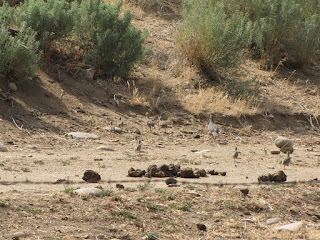 and if we get a third hatch we'll be looking at that block buster season we've been waiting for.

Grouse season opens in three weeks and chukar in just over five weeks and fire is all that can limit this season from being very good and like I mentioned if we have any kind of a late hatch it is going to be fantastic.

Hopefully by the next time I post, Grady will have pointed by scent and retrieved either a frozen shot bird or the real thing if the season is open. With this heat like it is, it's hard to imagine being on the hill with my boys but because of the generous season in Idaho I don't have to go until the weather cooperates. It's just nice to know that when it's time the birds are going to be out there.
Posted by Tuckers Chukars at 6:30 PM 6 comments: