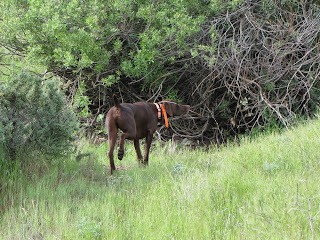 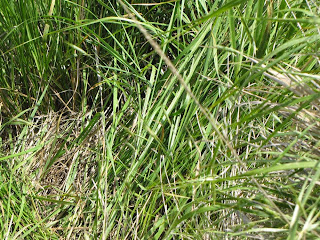 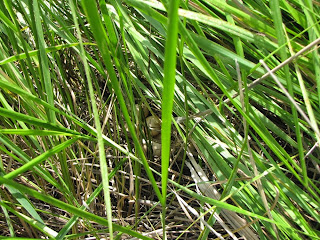 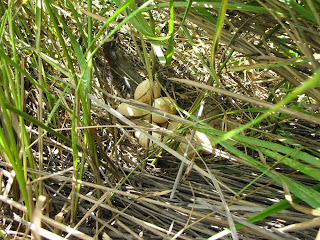 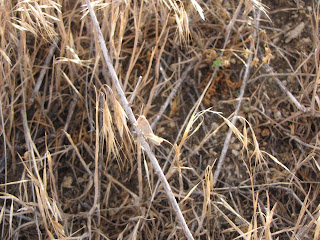 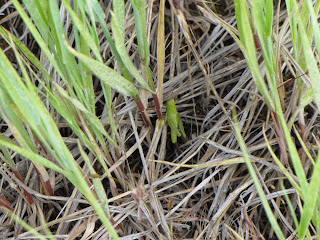 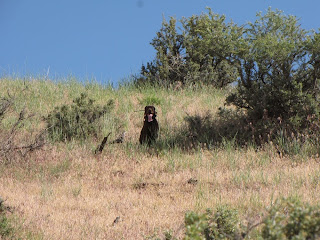 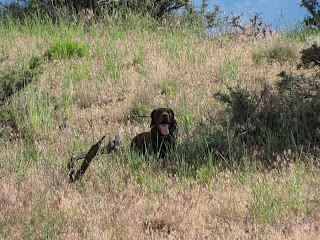 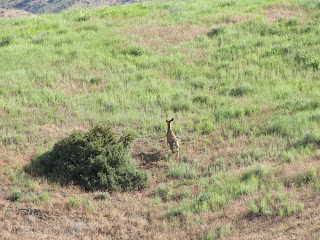 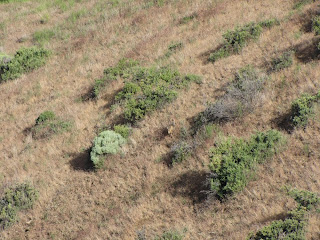 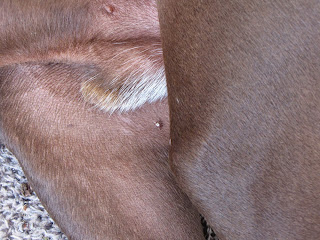 I knew the title would grab some interest. The hatching season is getting closer and in some instances has already happened. With the recent down pours those chicks might have a hard time staying dry and surviving. Most hatches aren't until early June or later so this weather is a great help in producing green up which makes for more insects to produce the needed protein for chick survival. So, all is still looking good. 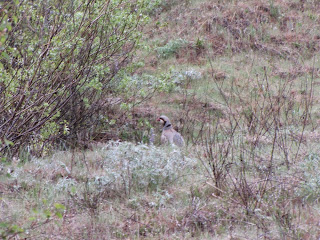 I know the affects of these spring rains are nothing new to most of us, but yesterday Barb and I got to watch mother nature in action, showing us one of the many things that can affect chick survival. Our show was put on by a baby duck that I named Murphy. I didn't have a camera, but the fifteen minutes we watched Murphy would have been a great nature film.

We met Murphy down by our pond. We were cleaning up around the pond after a recent rain storm, when out from under the dock comes a lone baby duck. He was peeping and swimming around as fast as he could. I suppose  he was looking for his family, but there were no other ducks around. He kept his distance from us and anything else that looked dangerous from the shore and covered the pond faster than I could imagine a baby of that size could. Eventually he found a family of geese to follow around. 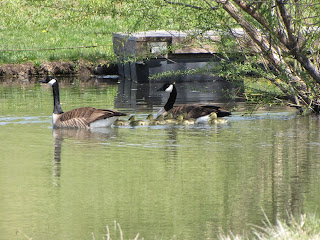 Murphy, not being too brave, kept his distance but followed the flock around the pond. He finally saw his chance to join the family when the gosslings all sprinted towards the center of the pond in fear of Jake salivating on the shore. During the confusion, Murphy got right in the center of the group. Things went fine for a while and when it calmed down, ma and pa goose took the young ones to shore. With ease the gosslings followed mom up the enbankment but Murphy fell back into the pond several times before his successful leap onto the shore. Barb was excited to see that Murphy was going to be taken care of when suddenly momma goose realized the intruder. She chased Murphy away and back into the pond.

Barb was feeling bad for Murphy and was hoping we could catch him and relocate him with some other ducks as I continued cleaning the pond. Suddenly, a gasp came from Barb followed with a "Larry, did you see that"? She was about to cry as she told me a fish just ate Murphy. We have some fairly large bass in the pond and Murphy had just become dinner to one of them.

Waterfowl don't have to worry about the weather conditions like upland birds, but the fate of Murphy is an example of just one of the many obstacles our young birds might have to face before they become big enough to fly and dodge our shotgun pellets. It isn't as simple as hoping the big stud get's the job done with his women and mom finds a good nesting spot. 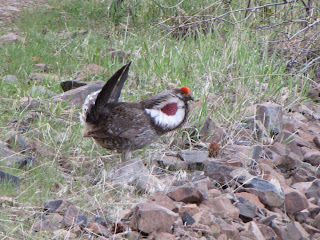 Now that the eggs are laid and the hen is sitting on the nest there becomes a series of new problems for upland birds. Protecting the nest. Almost every thing likes eggs. Skunks, foxes, coyotes, even snakes love eggs and once they find a nest it will surely be wiped out. I don't know how many eggs a snake will eat at one sitting but I'll never forget my first encounter with a bull snake with an egg about one third of the way down it's body still whole. You could see the perfect form of the pheasant egg. Magpies and crows will completely decimate a nest if found.

Although they say birds loose their scent during nesting season, believe me that is not totally true. I have seen my dogs point a nest from at least ten feet before and know a wandering coyote would be able to scent the nest just as well. 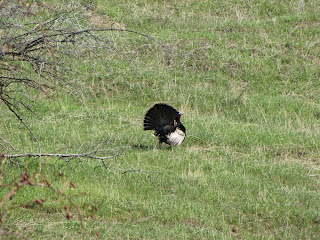 Once the birds have hatched they have another batch of problems to encounter. Like Murphy, they never know where the next danger is coming from. The coyotes and foxes are still a problem and now they have been joined by the predators from the sky. Hawks are now circling the skies looking for the scurrying covey's of birds as they chase bugs through the openings. Magpies and Crows are also notorious for pecking out the little ones until they die and than scavenge on the body. One year, I even saw a bear chasing chukars up. I don't believe he was successful but I watched him chase the momma, doing her wounded act for 100 yards or so. 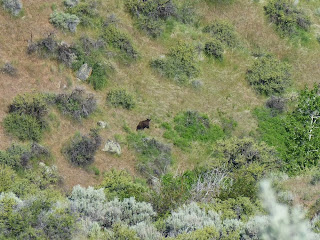 So, if the birds can get past these obstacles and many more, maybe we'll be seeing those numbers like 100 birds per square mile or more in 2015. Once hunting season begins, it becomes a lot less difficult for the birds. They just have to avoid the business end of our shotgun blasts, which in my case isn't to tough to do.

Hopefully, in a couple of months or so, there will be plenty of great reports of young upland birds running everywhere. Let's hope Murphy's law doesn't prevail.

Two days ago I wrote this post and today. one of the storms that would be a chick killer, came through our area. 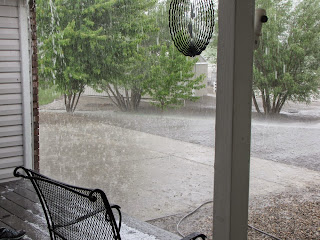 Two to four weeks from now, this storm would be pretty devastating to the upland population around here. Luckily, storms like this only hit small areas where the thunder head moves through. The weather radar only show it a mile or so wide. 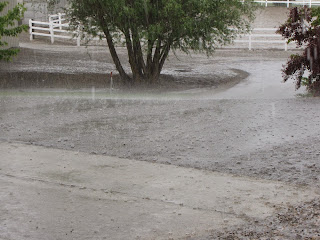