February has been an exceptionally long month. Not because it has an extra day this year, but because both Riley and I have been on the mend. My shoulder is healing fine and I think we're getting Riley's hip infection under control. But now we have another problem. While we were dealing with Riley's obvious problem (the big lump of fluid developing on his hip) we overlooked his knee. Dr. Katie Wright became concerned that after all the draining and meds that Riley still wouldn't use his right leg. Even though the xrays looked okay and Riley never showed pain in the knee area she felt there was too much movement in the joint and referred me to a specialist. Well Katie nailed it and Riley is going under the knife Friday. February is extending into May for me. 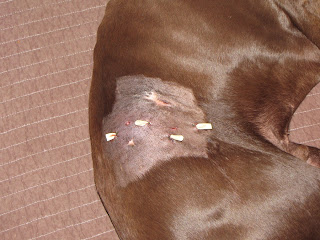 The medical expenses are never enjoyable, but for me, worse than that, is the time lost. Maybe it's because I have very little life beyond hiking the hills with my dogs. There is only Dakota and Riley now and Dakota's age and hips won't let him go far. When I'm healthy, that is usually not enough, so that leaves Riley to entertain me.

We don't only hit the hills just during chukar season, we are up there 12 months of the year. February is usually our slowest month, therefore if there is any patching up on the body it is during this month. We thought we had taken care of this until the knee thing came up. Now, March and April are set aside for healing also. March is usually the training month and April gets me and the dogs out scouting for turkeys in between training sessions.

Hopefully, Riley will be healed enough sometime in May. May and June are our months for hiking and photographing baby animals.

So you see, when one of us his injured, it is down time for both of us. I don't enjoy going to the hills much without Riley and he won't go without me. We're a team and we'll get back in chukar shape together this summer. Maybe this is just the price we have to pay for having so much fun.

As I mentioned before, the biggest thing that Riley and I are losing is time. You can never regain lost time. So whatever it is that you enjoy make sure you make the most of the time you have to do it. You never know when a little set back like this can rob you of some of the most valuable thing we have.
Posted by larry szurgot at 4:59 PM 1 comment: