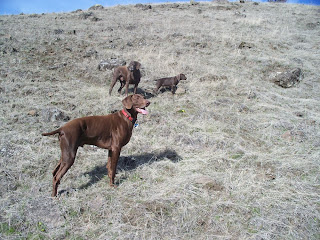 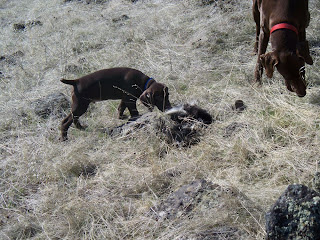 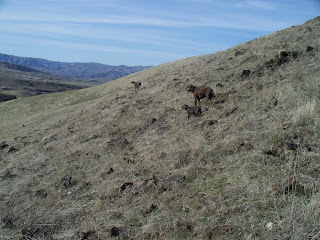 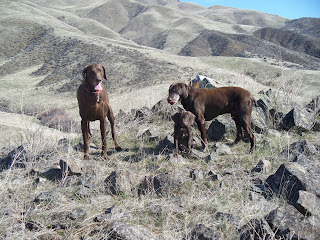 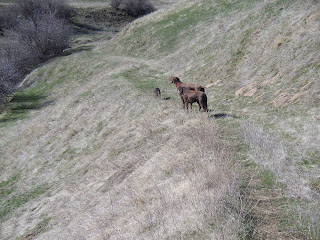 After hanging around here doing that bonding stuff, I was jacked to hear the Big Guy say we were finally going to hit the mountain. He loaded Riley, Dakota and myself into the truck and headed for the hills. I was hoping it would be as much fun as he said it would be. As soon as we hit the end of this road, he opened the truck doors and I knew by the other two dogs actions something good was going on. We headed up this trail and i was having a ball along with the other two, when suddenly Riley took a turn up this mountain. Anyhow, they called it a mountain. It looked like a cliff to me. I was keeping up fairly well until this moment. Suddenly Riley was all over the mountain. He'd disappear here and show up way over there. The Big Guy kept telling me some day that's what I'll be able to do. I've decided that I better do some working out on my days off. Luckily for me, Dakota was quite a bit slower on the hill and didn't like getting out of sight of the Big Guy, so I could always see one of them. Riley was a real champ on ht hill though. He kept coming back and checking on Dakota and me. And one time Riley stopped and got real intense. Dakota stopped and watched him so i decided to do the same. Pretty soon I heard a little noise and both the other dogs started down the hill. It startled me a little so I ran back to the Big Guy. He told me it was a pair of huns but never explained to me what a hun was. I decided to find out myself and so I followed my nose to what I assumed was a hun. I was about to pick it up and shake it a little when the Big Guy yelled that familiar word. NO! Seems like it was a dead skunk and that smell isn't so good after all. I never got to see a chukar either, but one time right after the Big Guy took a picture I heard something fly and make a loud commotion. Riley came unglued and got all excited and Dakota just sat there. Now I know what deaf means. Man, it was loud. I now have heard what chukars sound like, even though I haven't seen one yet. I have to say the boys were more than gracious to me. They showed me several different things on the hill and even let me lead once we hit the trail back to the truck. One of the things they didn't seem to show an interest in was elk droppings and cow pies. I found them quite good. The cow pies are even fun to pick up and run with. More than anything else, I learned I can trust the Big Guy. When I got into trouble, like crossing that huge two foot creek, I just howled a little and he came right back to help me. That's nice to know until I get big like Riley. The "crem de la crem" was back at the truck. The Big Guy just lay in the sun for a while with the other two boys and let me climb on his face and lick the sweat off of him. What a great finish to the day. I think Idaho is going to be great. Now, I think I'll take a good long nap. Sorry the pictures can't be placed due to blog malfunction.
Posted by larry szurgot at 5:04 PM 2 comments: 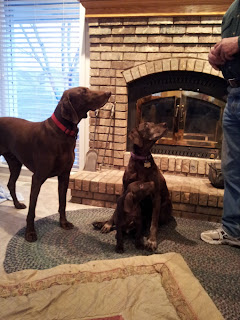 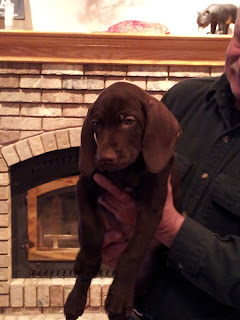 I don't know why, but Larry insisted I introduce myself. My name is Jake and I was born in a place that Barbara thought was heaven, so they call me Heaven's Jake. Little do they know, but my job is to make life hell for them for a while because they took me from my dad and mom and 8 siblings that I enjoyed playing with all the time. Our ride to my new home was a little scarry. The first thing they did was put me in a kennel and had me ride in the back seat of this big truck with a big dog that looked a lot like mom, only bigger. His name is Riley and he kept growling at me when I would touch his feet. What a sour puss. After about an hour of riding and Riley growling I got a little tired of it all, so I threw up on Riley's feet just to let them know I wasn't just going to lie there and take it. Once I got their attention, things went a lot better. We made several stops along the way and I got to smell all kind of new smells and see some great sights. I learned two new things on our stops. First, those big bushes blowing in the wind won't hurt you even though you can't out run them and second, you don't walk under a big dog like Riley when he's lifting his leg. You get wet that way. All the way the big guy, Larry, kept trying to brain wash me. He told me how great our new home was and how we'd be finding all these chukars. I don't even know what a chukar is. All I know is that it's hard to beat the life I had with Milt, Janet, and the rest of my family, in that place they called heaven. Once we arrived at our new home, I was introduce to another dog that looked like mom. I think his name is Dakota. He doesn't growl at me but he walks around like a great grandpa would, kind of acting like I'm not around. I'll soon make him aware of my presence. My new home is nice and even though I'm supposed to have the run of the house, Barbara and Larry seem very distrustful. They watch my every move like they think I'm going to do something wrong. Maybe when they start trusting me I'll quit waking them up every two hours during the night with my howling. I mean fair is fair. Wow, I got to smell a lot of new scents this morning and take a long walk. Larry said we walked about a half mile. I tried to keep up with Riley and Dakota but decided Larry's pace was a lot better for me. In fact it was kind of fun walking between his legs and watching him stumble. At one point a huge bird flew by and landed in a pond by me. I was very pleased when I was told that was a goose and not a chukar. Yes, I have a S on my chest for super dog but a bird the size of a goose is ridiculous. So, that is the history of my life with the Szurgot's so far. I will miss my family very much, but if Riley and Larry hold true to their promises, I'm looking forwards to a great hunting and family life. Larry also promises pictures aa soon as he gets the camera back from the fix it shop. Seems like it got dirty somehow on his many hunts with Riley and quit working. Imagine that.
Posted by larry szurgot at 9:18 AM 6 comments: