The title looks familiar. Yeah, I know, it's a famous song. But, yesterday brought a new meaning to those words for me. I went for a long hike to preserve any of the conditioning I still have. I went to a favorite hunting location just so I could see how bad of shape I was really in. With Riley only four days into his second knee surgery and Dakota's hips too bad for such a hike, I went by myself.

I wasn't very high up the mountain when I realized I wasn't alone on the hike. Sure, there was lots of wildlife out there, but my favorite hunting companions were there with me also. They all seemed to be there. Rookie, one of the finest Brittanies I ever saw, was retrieving a chukar from way down by the river. The longest retrieve I have ever seen. He must have stopped and put the bird down at least a dozen times. It was hot and dry but his heart wouldn't let him do anything less than get the bird to me. His heart was as big as the rest of his body.

As I turned from Rookie's great retrieve I was greeted by Allie's smile. She did everything with a smile. Her GSP blood told her to find birds, but the other mix in her sometimes said let's play. As I walked up the hill she stayed within 100 yards as usual, not wanting to miss out on any of the fun I might be having. No birds got by her in that area and since we always hunted with Rookie he was covering the outer edges. She'd much rather honor Rookie anyhow. In fact, if Rookie saw the down bird she'd yield to his retrieve knowing he liked the bird in his mouth much better. Allie was there on the hill with me just like she had been hundreds of times before.

As I watched the two hunt their way to the east, I wasn't surprised to find Tucker coming in from the west. He was making that eye contact with me, like he always did when he had pointed birds long enough for me to get there but I didn't show. I was familiar with the look as he returned to the spot where he backed out of a point on a covey of birds. Sure enough the birds were still there and Tucker made the shooting easier for me by positioning the birds between us. There were times when the aging Brittany hunted with Tucker, who was always willing to let Rookie have the easy retrieves and close points. The miles Tucker put on the year he had to hunt by himself was amazing. But he never faltered. He led me up several ridges teaching me how to hunt chukars properly. On the hike yesterday he was pushing me once again. I could feel it. Just over the next hill and you'll find me on point.

So, up the next ridge I go and sure enough there Tucker is on point. I start towards him when I notice another solid liver GSP on point in front of Tucker. It's Dakota, Tucker's son and Tucker is showing him how to do it with an honor. Gosh, I can't tell you how many thousand's of times I saw the two of them on point honoring each other. It was a sight I never got tired of. Dakota got a lot of his father's abilities, but wasn't quite the athlete. But what a retrieving fool. He never gave up on a downed bird. Although I would have to classify Dakota as a great chukar dog, he never got the glory he deserved being between two great athletes like Tucker and Riley. Riley came along to relieve the pressure on the aging Tucker. 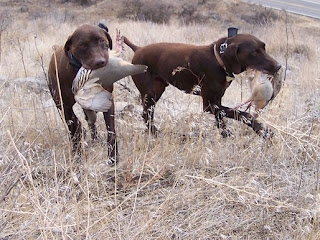 Somehow, as I watched Tucker and Dakota working the hill side another solid liver GSP joined the duo. It wasn't long before they were all on point and honoring each other. For a year the three amigo's worked together producing hundreds of point, honors and retrieves. Riley learned a lot from the dynamic duo that year and now is left to cover the mountain for me in the year of 2012. There won't be no relief pitchers for him this year, but maybe a solid liver pup looms out there for the future. 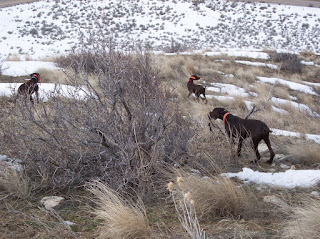 I wasn't real sure I had room in my heart for another pup but taking this walk yesterday has helped stretch it a little wider. I miss my passed dogs very much but found that they were still with me. All I had to do is take a familiar walk by myself to find that I'LL NEVER WALK ALONE without great memories of my dogs 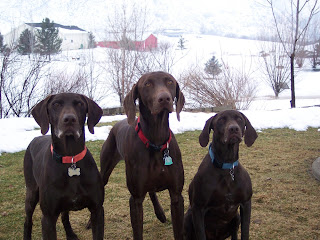 Well, about the time I thought things were getting back to normal, bam, we hit another curve in the trail of year 2012. Riley blew his other knee. I've been noticing for the last couple of weeks that Riley was struggling some to get up from the resting position but thought it was due to fatigue in his repaired knee. Yesterday, on our hike he didn't run much so I figured once again, fatigue from the repaired knee. He went 7 miles and got a couple of nice points on turkeys and spent a lot of time in mud puddles cooling off before coming home. 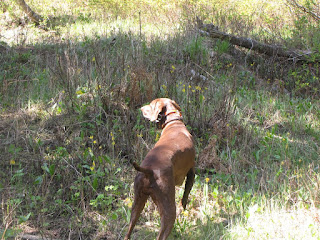 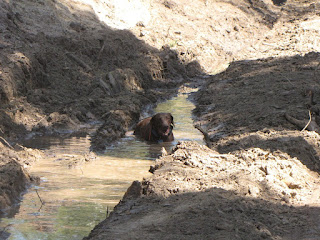 This morning Riley and I were chasing each other around the field when he suddenly let out a yelp and quit using his hind left leg. Knowing the familiar gait of a bad knee I took Riley in to see our vet, Katie Wright, who diagnosed my fear as being correct. From there she sent me to the surgeon where Riley was scheduled for a Wednesday operation. So we are now braced for another 12 weeks of boredom. I'm not sure which of us this is roughest on.
Dr. Wright told me that when one knee is blown it usually isn't a case of if the second knee is going to go but when. At least the when is over for Riley and hopefully September 15 will see us back chasing chukars and hopefully at 100%.
One other note I might point out. Each of us are built differently. The hills are not the hills for me anymore unless I have my dog with me. I love hiking the hills with my canine partner as much as he enjoys being there with me. So when he is down I am down. Down time is an eternity when you only have 13 or 14 years together. Tucker taught me that it was alright to love my dogs and Riley has taught me how much I need them.

Posted by larry szurgot at 2:32 PM No comments: