Since February 2 both Riley and I have been recovering from doctor and veterinarian visits. Me with a shoulder operation and Riley with first a hip infection and now a knee operation. If things go the way they should, we will be pretty close to 100% in 8 more weeks. The past two months have given me even more appreciation for my canine partners.

As a human I have many different things to fall upon to help me pass the down time. I have my wife and family to help me in all the things a one armed guy can't do. All those little chores like cleaning up the dog poop still have to be done. They have also helped to keep me entertained by playing word games and bringing the grand children over for entertainment. I also have my friends to humor me with dog stories and travel to sports shows with. What's more I have a dog that helps keep me entertained. With all that Riley has been through he still is always by my side. If I lay on the floor to stretch my arm he is right there either flipping my arm with his nose for a ear rub or shoving a rag in my face trying to get me to play tug of war.

To say that we have become attached at the hip in the last two months would be an understatement. With that, I have come to an understanding of how much we are needed by our dogs. Especially hunting dogs. Think about it. Almost every aspect of a hunting dog's life revolves around one person. Who feeds the dog every day? Who is usually the first person your dog sees in the morning whether he is kenneled or sleeps in the house? Who exercises the dog? Who takes the dog to the hills to hunt birds, the activity he enjoys the most? Our hunting mutts are pretty much dependant upon us.

Riley and I have always been a pretty good team on the hill and now we read each other at home also. He has learned what just about every move I make at home is for, just as I have his. After a therapy session, Riley usually puts his head on my lap as if he knows I'm hurting a little and he has different postures when he is uncomfortable that I pick up on. 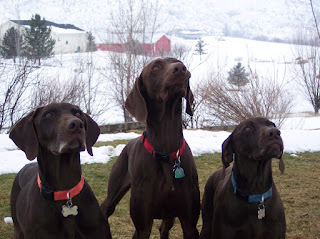 I've always known how much our dogs rely upon us, but the last few months have really driven that point home. So, the next time you take a ride somewhere and your dog stares at you from the kennel or house window, consider taking him or her with you. The next time you're eating a treat, share a little with your partner. Remember, all that dog wants in life is to be doing something with you. Give them the attention they give you.
Posted by larry szurgot at 8:08 PM 2 comments: 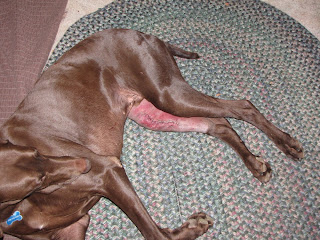 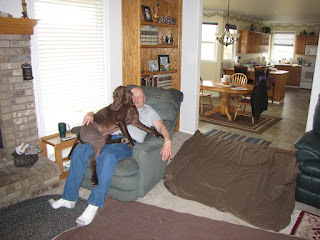 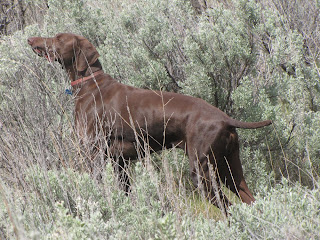 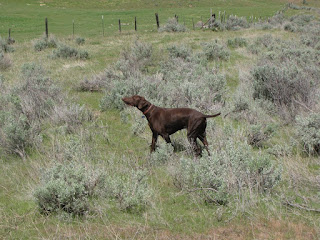 Week 10 has Riley doing about 5 miles on our hikes now. He shows no sign of limping while on the hikes but seems to use his shoulders to lift up from the laying position after the walks. Like humans I'm sure he is a little sore so I give him a pain med to help him out. One good thing is, Riley seems to know when enough is enough and slows down.
Week 11 went good for the repaired knee. But, as I was warned could happen, Riley blew his other knee today. So we are about to go back to week 1 with knee two.
Posted by larry szurgot at 7:19 AM 4 comments: