My last post had me dissing my dog and commenting on poor dog work. Jake must have read that post and decided to make me feel a little foolish. We got a little more moisture and the weather cooled some for our last two hunts and Big Jake's form was back to normal. 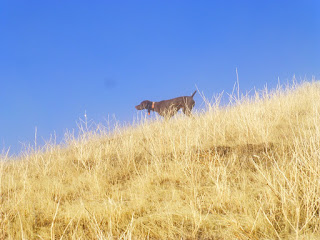 I even started out the day participating and shot a few birds for Jake to retrieve. 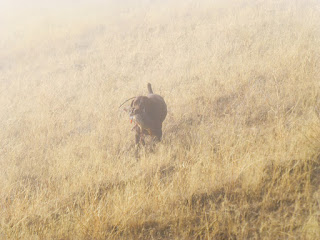 But, both days found my eyes failing me and I started having a tough time centering in on the birds. Had my eyes not failed me I'm should have easily come home with a limit both days and with birds that seemed to hold pretty darn good. I apologized to Jake. I guess we both can have some rough days.

Anyhow, to those that are wondering, it is time. Hunting conditions have improved to almost perfect. We almost had a frost on the ground this morning. Combine that with a slight breeze and our canine partners are ready to show us some of the good hunting we've missed the past two years. I've even seen a few covey of huns. They have been eluding Jake and me this year but are suddenly starting to show up and some decent sized covey's.

Eddie, no more excuses for you either. The snakes are pretty much gone for the year.

Thanks to Conner, my grandson, we have some venison in the freezer and can now concentrate on chukars for the rest of the season. 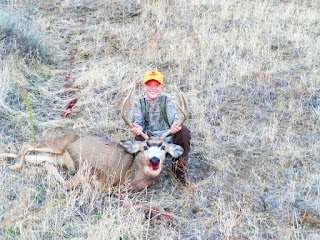 Keep me posted on your hunts and I hope you're seeing as many birds as I have so far this year. Barb and I are heading over to Woodhead this afternoon through Sunday to chase chukars, so if you're in the area make sure and stop by and swap stories with us.
Posted by larry szurgot at 7:29 AM 3 comments:

Opening day for the chukar season had a little moisture and normal temperatures this year. Since then it has been super dry and very warm, so you can imagine my excitement when it rained over night. I was up early and off to the chukar grounds.

Although I've been seeing good number of birds this year, the dog work has been dismal and with poor dog work usually comes fewer birds in the bag. Several of my chukar hunting buddies have been having the same result with the birds so I've been cutting Jake a little slack.

Today was going to be the day that would make up for all those bad days. Not hardly. Jake and I hadn't been on the mountain for 15 minutes when the first large covey of chukar jumped wild about 100 yards away. I was jacked to see such a large covey that early and so was Jake. For some reason he decided if the birds were going to flush like that, he was going to extend his range some. Normally, I don't mind. But on these steep hills I can't see him much over fifty yards unless he is on the other canyon wall, which he was at times. There were times he was on point at a couple hundred yards away and by the time I covered half of the distance I was seeing birds fly around the ridge with Jake following them to see where they were headed. The first few times I felt like Jake was just a little rusty and he'd calm down but after a half dozen or so I was beginning to wonder what kind of demon had taken over my dog.

There was even one time when Jake was on point on the opposite ridge. I started that way knowing I would probably never get there but at least could watch Jake and see how long he would hold point. It wasn't very long. I don't know if one of the birds started moving or what but Jake suddenly ran through the middle of the covey scattering them everywhere. I had to assume that the reason he was clear over there in the first place was that he had already busted them and saw them land there.

Jake did have a couple of nice points where everything worked the way it is supposed to. Jake is going to be three in January so he still has a lot of learning but he once held some birds for 45 minutes while I struggled to get to him so I know he knows what he is supposed to do.

We spent a lot of time on the mountain today, not being chased off by the heat, and I hoped to get the problem figured out. By the time we reached the truck I had no solution and in fact I didn't even know what the problem was since most of the action was happening out of sight. Maybe, it was just an off day. Maybe, there wasn't enough moisture and with the calm conditions scenting conditions weren't as good as I thought they should be. There are a lot of maybe's, but I think I have found a part of the problem.

Although I have always considered Jake very bird smart for a two year old, he has never seen a lot of birds. He has had well over 400 points in his first two years but saw very few large covey of chukars and sometimes went for hours before finding birds. This year he is finding birds more often and bigger numbers in the group and possibly it is just to exciting for him to handle right now. What a great problem to work on.

So the moral of this story is, Jake is not as perfect as I thought he was and there are lot's of birds out there to help solve our problem. We're just going to have to get out there as often as possible and make things work. Hopefully Jake will soon figure out that he's not going to get to put that bird in his mouth as long as he chases. It only takes a few times and we'll be working as a team again. (I hope)
Posted by larry szurgot at 6:34 PM 2 comments: 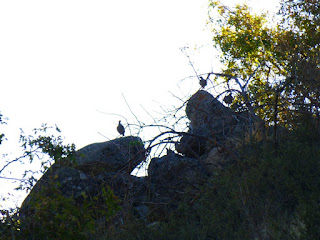 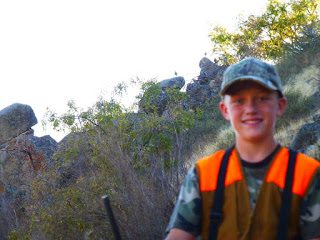 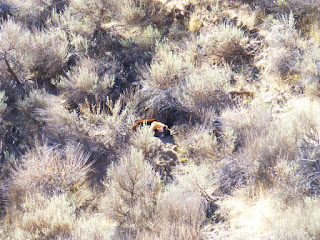 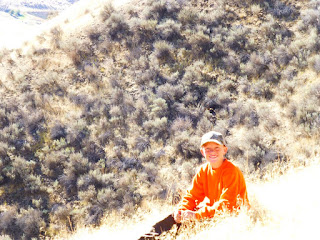 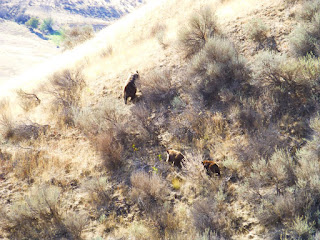 Be patient, the birds are out there. Good Luck.
Posted by larry szurgot at 8:25 AM 6 comments: