Still fun without a gun.

Jake and I have been running the hills as often as possible since the season's end. As usual, we're having almost as much fun without a shot gun as we do when we have it. I still get excited at every point and I know Jake is the same because of the excitement he shows when I take his collar out of the case. We've been using these days to work on stop at the flush, something that he started forgetting towards the end of last season. 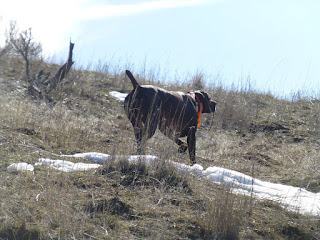 Jake seems to have extended his range some but still holds point until I get to him. 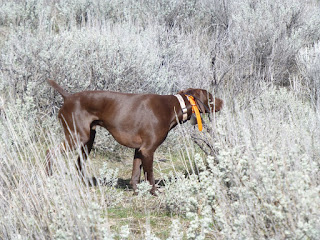 I'm not real sure that I'm excited about the extra range but we'll find out when the season comes. We're also working on those encounters with unwanted animals. So far Jake has figured out that badgers and skunks are bad and wants to stay away from them. A little shock before the spray is a lot better than the scrub down after the spray. The shock collar works the same with badgers, skunks and porcupines as it does with rattle snakes. One or two encounters and there is usually no reinforcement needed. 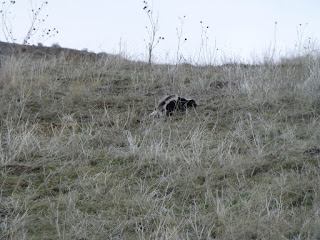 Along with letting Jake work, sometimes Conner comes along and hunts for sheds. He's a great pack horse and I also use him to walk out in front of Jake's point so I can observe Jake's reaction at point from a different view. 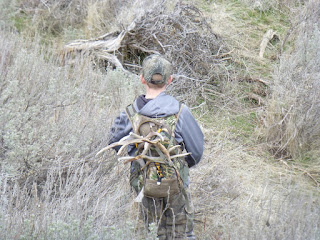 Conner is saving sheds in hopes of buying a new shotgun in a few years. Every time out he seems to find a pack load. 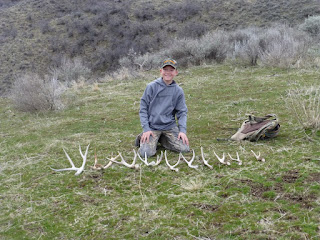 We're also seeing how the birds have faired and everything looks good. We're finding lot's of paired up chukars and a few paired up huns for this spring's hatch. In one location I found several single blue grouse. I don't believe they pair up but are more like pheasant's and turkey's. Of course there are quail everywhere and they are still in some nice covey's. Jake has been having a ball with them. He always has a great point at first smell but watches them fly to the next big clump of cover and streaks to them. Once in a while I even capture a flushing chukar. 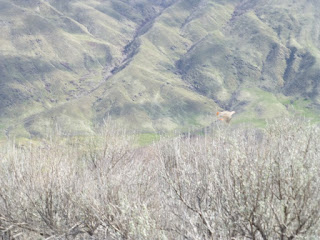 We're also using the time to do a little turkey scouting. Another bird that faired well over the winter. 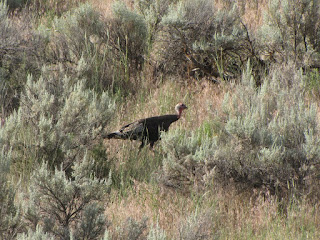 There's also lot's of deer and elk running the hills and are always fun to observe. Even though just watching Jake work birds and go on point is all I need, there are lot's of reason's to be on the mountain and this time of the year the temperature is right and you don't have to pack water for your four legged friend. The year is getting off to a good start with the moisture and we're all crossing our fingers for a great hatch. Get your pups out there and enjoy the mountain before the hatch does come. You and your dog will both be better off for it.