Usually I like to talk about my dogs and diagnose what they did right or wrong. This week I was once again impressed with the old man. Greg Munther, a friend from Montana that I met last year, joined Riley and me for three days in Oregon. Of course he had Lucy with him. Although we never hunted side by side I did get to observe his astro unit and of the three days we hunted together he outwalked me all three. I tried picking his brain as to diet, etc. but his humble response was always "I just try to keep a slow steady pace." Slow my ***. I tried to keep up with him on the trail before we split the third day and he had my lungs burning. Greg is 69 years old and covers more ground than most 30 year olds I have hunted with. Guys like him should be an inspiration to all of us. Get a good dog and chase the birds and at 69 we might be lucky enough to be in the physical shape he is in. Here's a picture of Greg and Lucy and a few of my goofy partner. 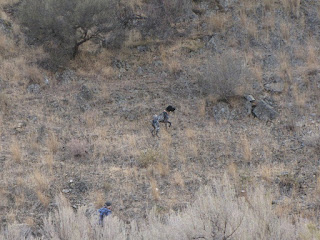 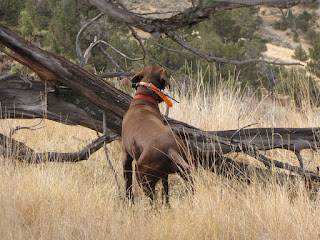 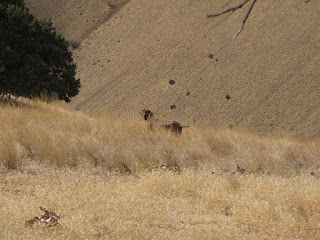 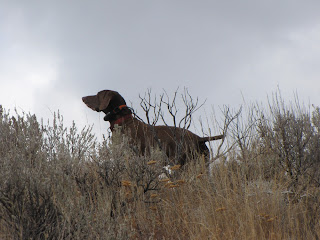 I've read in many different magazines and heard in pointing dog discussions that sight pointing can be a bad habit for a bird dog. I am by no means an authority, but I can't see where it hurts as long as the dog also points scent. It seems like it adds just one more piece to the puzzle of getting more birds. Today, Riley proved to me that sight pointing is very useful. Maybe my other dogs have done the same thing, but I have never seen it as obvious as it was today. The conditions are warm and dry on the hills. I've never seen conditions this tough for dogs. Several times today Riley would act like he hit scent. He'd stop and then search the area with his nose looking for more scent. At some point he'd lift his head like he was looking for birds. Sure enough he'd go on point. Not a high tailed point, but a point all the same. I could tell he had made contact. His eyes told the story. As I approached he would break point and circle the birds pinning them between us. This happened at least a half dozen times today. Rileys nose couldn't pin the birds but his eyes did. I'm not trying to make Riley out to be a super dog. I think all dogs are capable of doing this. It's just that he gets out more than most dogs and is pretty much left to hunt and find the birds how he wants. He knows the point of locating birds is to find them and hold them for me. I don't care how it's done as long as we work as a team. Today was about as good as team work can get. But it was mostly done with his eyes today and not his nose. One more note on Rileys ability to communicate with me. After 3 hours of hunting the dry conditions today he just quit. I was heading back to the truck and walking a cow trail and Riley fell in behind me on the trail. He stayed about 10 yards behind me for the last half mile pretty much telling me, enough is enough.
Posted by larry szurgot at 6:15 PM 3 comments: 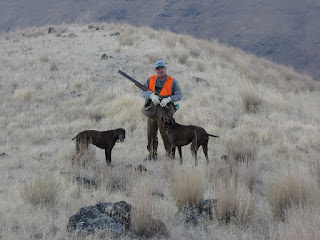 Barbara and Dakota joined us for a few days and hiked a few miles. It was great to have Dakota trying to find a bird on his fourteenth year of hunting. He soon tired and they left Riley and I to the mountain. With the amount of water I'm carrying on the hill right now I have decided to leave the camera behind. But the pictures of great dog work have been embedded in my mind. Proof that I still have one. Although the conditions are still very dry, the cooler days make it possible to stay on the mountain as long as you have or can find some water for the dogs. Riley is in great shape for being five months away from his second knee operation. In four days he covered 58 miles which included multiple retrieves straight up the steep slopes. Nothing wears a dog out more than coming up those steep slopes with a bird in mouth. A seasoned dog is worth it's weight in gold during these dry days. That I can remember, Riley only busted two coveys in four days. He ranged out hard but slowed way down when he hit bird scent. His nose would get low to the ground (something I rarely see during normal damp weather) and he slowly covers the area until he would locate the birds. It wasn't one of those weeks where I could watch Riley covering the hill and than suddenly slam on to point. If I saw him slowing and working his nose I just started moving towards him knowing there would soon be birds. The condition of the birds is going to be questionable in a month or so if we don't see some green up soon. There is no fat on the birds and there breasts aren't quite as plump as usual. It doesn't take much. Just one good rain and the cheat will start growing. When there craws start getting full of green grass they are getting the nutrients they need to fatten up and survive the winter. Although there weren't birds around every corner as some would like, the numbers are good. Riley and I came home not only for a recovery period but because we had reached our possession limit, even after cooking some up for a nice meal. Riley is favoring his right front leg a little. Hopefully a couple days off will cure this and it won't be anything serious. When the moisture comes and I don't have to pack so much water I'm going to start packing the camera again. Hopefully I can get some good dog work and just post pictures so you don't have to figure out what I'm trying to say. Good luck to everyone on what looks to be a great season. Spudfed, I did finally answer your question on the last post.
Posted by larry szurgot at 7:56 AM No comments: