I just got back from a 150 mile dirt road trip looking for birds. I don't usually scout from the road but after my last three hikes I thought I might give looking for quail a try. On my last three outings I saw a pair of chukar which I believe didn't have any little ones by the distance they flew and another single chukar. I was getting a little desperate to prove that this winter wasn't as hard on wildlife as some might make you believe. So I took a drive to places where I knew quail are abundant. In shortly under 150 miles I saw 2 pair of quail. By the time I got home I was ready to concede to the hunters with the half empty glass theory but not before looking at my entries from July of the last ten years. 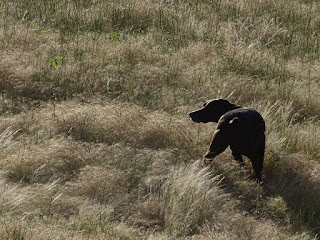 Summing it up, I've already been out more this July than any other July. My bull headedness has taken over and I so want to prove my early prediction forecast that I'm wasting lot's of time, gas and energy, not to mention getting a little disappointed. In ten years the only decent covey of chukars I have seen in July was the 17th four years ago and there was about fifteen 6 to 8 week old birds with a pair of adults. Yes, I have had a few other encounters, but the month of July should be the month to stay home and save some miles on the truck and legs.

August has been a pretty good month to find young birds if my entries prove anything but the weather conditions seem to be as responsible for finding birds in the off season as it is during the hunting season. Almost every August after a rain or on a cool morning I have been successful at finding birds with young. The surprising note is how many really young birds I find in August. There seems to be quite a separation of age in birds at that time. From week old birds to 8 weeks or better.

The amount of big game animals I saw the last two weeks should have been some type of clue that I was wasting my time being on the mountain. I didn't see one calf or fawn in areas that in June I was constantly coming in contact with one after another. It seems like the only animal out in the sun was this dumb human with a not so enthusiastic dog.

Don't go negative on me. I know deep in my heart there will be lot's of great opportunities this fall and my negative outings were just poor timing and planning. We have never seen young quail around here until the end of July but somehow I though this year might be different. I understand now that July is the month to stay up high in the timber if you want to stretch your legs and exercise the dog. All this month did was make me second guess myself.

Who knows, maybe those that say this winter was terrible on wildlife might be right. I still don't think it was although I may have to back off on my "way to early forecast" of a great year to an average year for chukars and huns. Next month will help get a better feel but the real test for us chukar hunters is when the season begins. I'm still as excited as I was in February for the season start and will be on the mountain as often as time and Jake allow.

I'm looking for some positive vibes out there from some of you to help keep us excited. 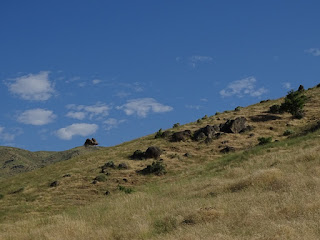 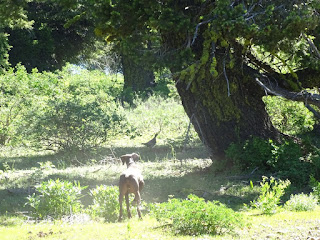 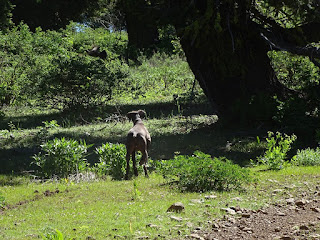