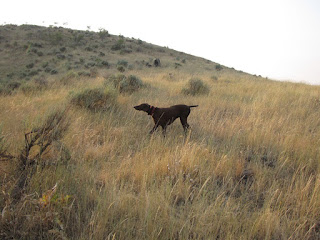 Yesterday Riley and I were up on the hill and experienced one of those off days. I'm sure there were birds around but in 3 and 1/2 hours we found only two small covey of huns and a solo chukar. We had several unproductive points and relocates but couldn't come up with birds. The two covies we did find ended up being bumped after solid points and several relocates. Riley knew they were there but just couldn't pinpoint the birds until he eventually bumped them. I've talked to a few other hunters who are having the same kind of luck on the hill. In fact, I ran into Mike Richards and his good looking setter on the hill yesterday and when the day was through he concurred with me that there were birds around but the conditions are just making it tough on the dogs. A couple of guys I've visited with said they weren't going to hunt their dogs anymore until the weather changes. They thought it was tough on their canine partners. It might be. I don't know, but I do know that Riley loves being out there and it's a lot better than sitting around the house moping. I do know that it isn't hurting me being out there. As I get older I find when I take a little time off from hiking the hills it takes a lot longer to get back into shape than it used to. I have to hike the hills at least a couple times a week or my body lets me know I'm letting it down. So, I'll put up with these poor conditions until we have a good weather change, and be happy with fewer birds and packs filled with water, knowing that when it does happen Riley and I will be like kids at Christmas time. Here's to some good rain in the near future.
Posted by larry szurgot at 9:17 AM 5 comments:

Riley not missing a beat

Well, the chukar season has begun. I don't know about the rest of you, but this was and is still a long summer. I've been worried about Riley's return to the mountain but he has come back stronger than I expected. We have been out twice now and Riley has covered over 11 miles each day. I'm sure he could have gone farther but the vet says he has a couple of months left before I can expect 100%. There were plenty of birds out there and Riley had loads of points. His retrieving is as good as ever. The only thing he is lacking this year is honoring. Riley is going to be a loner on the hill this year so I'll be missing that pleasure. I've heard some grumblings of people not seeing many birds. Riley and I did not find that to be the case. We got up early and hunted the shaded sides of the draws. The sun finally hit us about 10 oclock and we headed towards the truck drinking what little water we had left on the way. One advantage of being on the hill early is an occasional bugle of a bull elk in the distance. Outside of the heat, there were only two negatives to being on the hill this week. Number one was the smoke. My lungs really burned and it was hard getting that second wind. Number two was the dust and pollen. Riley's nose was caked with a brownish green substance by the time we finished our hunt. That's got to be tough. Just one more testament to how hard our partners work for us. We'll just keep finding some shaded draws to hunt until we get some cool and moist weather. Hopefully that will be soon.
Posted by larry szurgot at 5:21 PM 3 comments:

John Carter asked where I've been lately? I checked my blog and realized it's been over a month since I've posted. I have to admit there hasn't been much to post about except Riley's recovery. Although it's not that exciting, there might be some that are wondering what to look forward to if their dog ever blows a knee. We've been on the hill every other day since week 10 post op or August 1. Riley shows no sign of pain or limping. He has progressed from 3 miles a day to 9 and would probably go further except I stop at that distance. My only concern is, the evening of the hike, he has a pretty hard time getting up from the laying or sitting position. I hope we're not going too fast. The vet says it takes 6 months for total recovery, which is two months away. We've been able to throw the gun into the equation since Aug. 30 and that helped pick up the pace quite a bit. Every point and retrieve on the blues seems to help both of us forget about the long summer. We're going to get out 3 more times and then take a five day break in preparation for the chukar opener in Idaho. Hopefully, we'll know when to say when, once we start doing what we love best. On a side note. My 10 year old grandson, Conner, shot a limit of doves on his first ever dove hunt. I wasn't there to watch it, but he said there was a big pile of empties on the ground by the time he got his tenth bird. Riley and I have a lot of excitement coming to us through this boy in the coming years. You young guys out there working your tails off, trying to make a living and wondering whether it's worth it at times, keep faith. It does get better. I don't know anyone who has a better life than I do. Family, dogs and the outdoors. It really doesn't get any better.
Posted by larry szurgot at 7:04 PM 2 comments: