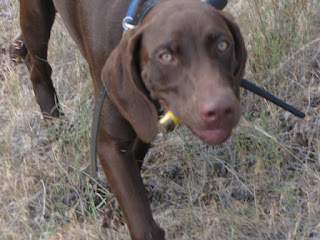 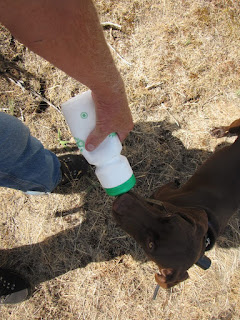 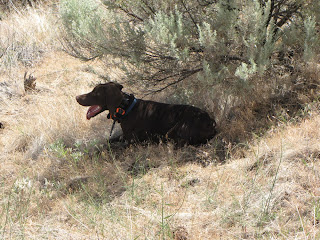 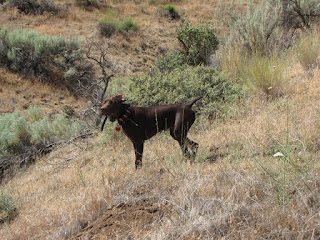 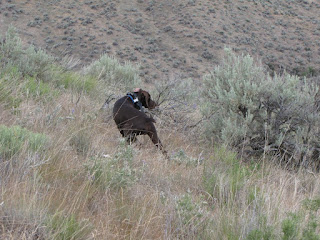 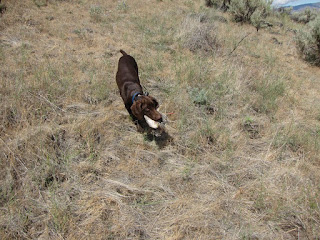 Hunting season is three months away and I'll be ready. I'm hoping Riley heals up by then. I could sure use him for some fine tuning when it comes to chukar hunting. He's a tough old boy and has been through hell the last 40 days and he's lost a lot of muscle mass but if any dog can overcome his injuries, Riley can. Now the Big Guy is a different issue. Humans are kind of fragile and I'm going to have to use a lot of dog psychology to get him back on his game. If he plans on having a good chukar season he's going to have to keep up with me. I'm not going to go soft on him when it comes to the real deal. And if Riley get's better, the Big Guy is going to wish he had wings on his feet trying to keep up with the two of us.
I know the Big Guy is hoping for Riley's return and so am I. Although I love finding the birds myself, working with such a pro is fun. Besides, the way I understand it, all of the Big Guy's hunting companions have girl dog's. I don't know if I'm ready for that yet. If we don't watch out, pretty soon they'll be letting the females ride up front with us. Another thing I wish I could teach these humans is to quit saying I'm cute. It embarrasses me in front of the other dogs. I'm a chukar dog and we're tough not cute.
Posted by larry szurgot at 4:43 PM 2 comments:

Sometimes you have to blow your own horn.

Well, this summer isn't turning out the way I hoped. Riley busted his leg three weeks ago and I bunged my knee up on a turkey hunt. Last weekend I finished the job on my knee while getting fire wood and had it scoped on Tuesday. Not that big of a deal because my recovery is just a matter of five or six weeks and I should be humping the hills with Jake.
Riley is a different matter though. After enduring a major surgery and three weeks of mending, he busted a screw in his leg and the break is not healing properly. So he is back getting operated on right now and we are back to square one for recovery time. This time when he gets home he is going to be in very tight quarters for five weeks so we can prevent the chance of injuring the leg again. What a blessing to have Dr. Warner and staff on my team. Saturday night and operating because he felt waiting any longer may be detrimental to Riley's full recovery.
With all this going on, I have to admit to being a little short with a gentleman today. I was at a baseball game watching my grandson play. Riley was with me because I was scheduled to take him to the vet after the game. Another spectator, who I've visited with quite often about chukar hunting, came over and visited with me. Everything would have been fine except he mentioned how it seems like Riley and I are always breaking something. Knowing what Riley was about to go through again I took it personal and decided to blow our horn a little.
This guy hunts chukar maybe three or four times a year and the rest of his hunts are more on the flat land hunting quail. I have no problem with this and I actually appreciate it because it keeps one more dog and hunter off the hill where I might want to be. But he began comparing himself and his dog to me and my boys. By the time we were through discussing our hunts it became quite obvious that we hunted with a difference in intensity. His thirty or forty points with his GSP last year did not quite come close to Riley's 700 plus. His x number of birds retrieved did not come close to the x number of Riley's. In my opinion, the hardest job a chukar dog has is retrieving the birds on those steep and rocky slopes. I can't count the number of times I've seen my dog's chasing a cripple down a steep slope to have the bird slam on the breaks causing the dog to roll head over heal down the hill and than recover and resume the chase. I don't very often like to boast about how many birds me and the dog's get and how hard we work for them but today was a day for blowing my horn. With me hobbling around and Riley about to go into surgery again I felt it was necessary for some people to realize that our scars are battle scars that we were damn proud of and we earned. We could have healthy bodies and spend more time driving the roads looking for birds, but we'd rather keep doing it the way we do even if it means suffering a little. So, the next person should be real careful at classifying my dogs as being a little on the tender foot side. They earned the respect that I demand they get.
Posted by larry szurgot at 7:25 PM 3 comments: