The 2018/2019 chukar season is on and by what I found and by the post on some of the other chukar sites it's going to be a productive and fun season. The opener had enough clouds early to keep us on the hill a little longer but when they left the boys were ready to call it a day.

In the last post, Troy mentioned about how many people (including himself) had new pups this year and was interested on how they are all doing. I also would like to hear about your outings and maybe your stories might enlighten the rest of us on how to handle different situations. I know this site doesn't let anyone post their pictures but if you send them to my email at tuckotatime@gmail.com I might be able to figure out how to get them on this blog. I would really enjoy that.

I'll start with Grady's first chukar hunt. He was built for the chukar hills. He found his legs in the open country and covered some ground. He was independent of Jake and covered different country but kept an eye out for him. Like all of my past dogs he was a natural honorer. I think that's due to the pup's spending so much time on the mountain with the older dog's before the season. Grady had three honor's in the first couple of hours and stole one of the retrieves from Jake. Jake didn't seem to mind and Grady brought the bird down the slope right to me. 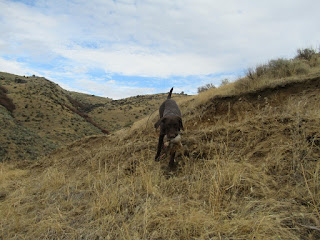 This was the same scenario I had while grouse hunting and I was hoping for Grady to get his own point. When he finally did it was a beautiful and staunch point. One that left no doubt that the birds were there. Although I wanted to take the camera from my pocket I refrained and softly told Grady good boy as I walked out front. He stayed tight until the flush when all hell broke loose. It was no wonder he hit scent, there were at least forty birds of different size in the group. I picked a mature bird and dropped it with Grady quickly picking it up and proudly bringing it back up the hill to me. He put the sequence of bird hunting together that I hope we'll repeat numerous times this year.

The biggest problem we might encounter is actually Jake honoring Grady. His trainer, Riley died at too young of an age to hunt with him so this is the first dog Jake has ever hunted with. He seems to pay little attention that Grady is even on the same hill. With over four more months of season it's going to be fun working on it though.

How did your pups do? 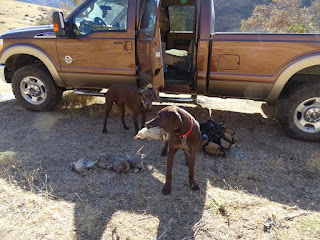 Chukarhunter50 (Mark Midtlyng) confirmed a pretty good season to come with these pictures of Emmie, his small Munsterlunder. He also mentioned a fire burning Saturday on Brwnlee reservoir. 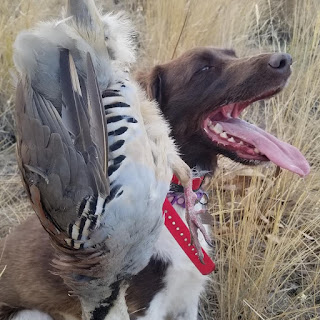 I'd say they had a darn good opener.

Another chukar hunter, Brian B. Kondeff sent me some pictures of his two DD dog's from this weekend. Brian mentioned that when he got Sophie (lighter colored dog) as a pup his trainer suggested to hunt her alone but he couldn't do that due to the lack of time in the field each dog would get if hunted separately. In the end all problems worked themselves out and three years later you can see the results as 6 year old Gus is honoring 3 year old Sophie.

Brian says his opener was a great success with an estimated bird flush of over 200 birds before the heat and mountain sent him and his two companions home to recover. 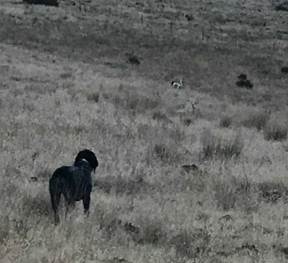 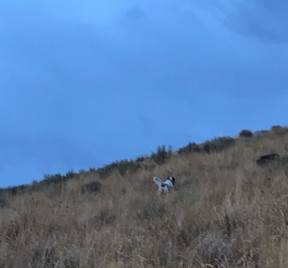 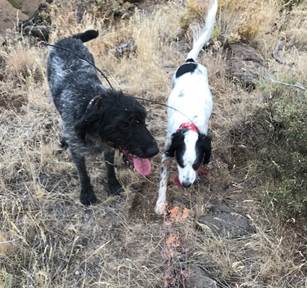 Quinn Inwards GSP, Sage got her first hun off a fine point at just over six months old. The bug is getting to Quinn and it won't be long before Sage has him infected for life. 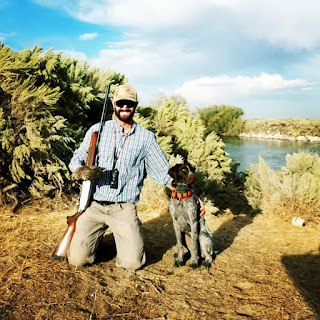 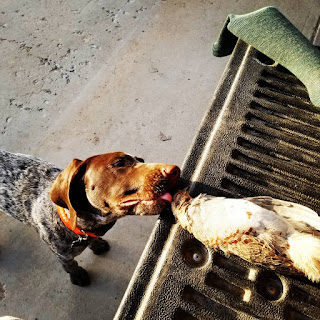 I try not  let politics get in my way of hunting or this blog but as I'm sitting here watching it spit rain I figure it a good time to explain how I feel about the current bird seasons. Just recently, the F&G sent out a survey to upland hunters with several questions about the current seasons and possibly removing the September opener and adding 15 days in February. Most of you who trade emails with me are from out of state so might not have seen this survey.

I know Jeff Knetter, the bird biologist with the Idaho F&G, and figure he must be getting some pressure from a few upland bird groups to possibly make this change to the season. He's an upland hunter also and knows the current seasons have worked well for us for over 50 years so there must be an outside source asking him for this survey.

The reason I'm writing about this today, more than a month since the survey came out, is because of the weather. It has been very hot and dry for the last two months and now the temperatures have changed and are below normal for this time of the year. In fact, as I mentioned, we're having a little moisture. Because of the forecast I decided to take a quick grouse hunt with the boys this morning. In stead of having a bird bumping day due to the lack of good scent, Grady got his first scent point on a blue grouse and also his first retrieve of an unfrozen bird.

Chukar season opens in 3 days and there is a possibility of some more moisture before then and the temperatures are going to be below normal. There have been many openers I have missed because of the heat but I don't think I will be missing this one. Heat is one of the reasons some mentioned for moving the season back to October. There always seem to be two or three cooler days in September so why not be able to take advantage of them. Another reason suggested was because of the young birds. Normally there are a lot of young covey's this time of the year but you don't have to shoot. There are a lot of bird hunts where you can only shoot the male and you have to choose your shot, we can do the same on these young birds. Rattlesnakes are another reason mentioned. I see more rattlesnakes in October than any other month in the summer. They are moving back to their dens and usually when you find one you can find more. I hunt the early morning hours and try to stay on the shaded north side of the hills where dens and encounters are less likely.

There are many other reasons mentioned for removing the September part of the season. The claim that some hunters sit by a water source and slaughter the birds is questionable to me. I don't think many chukar hunters are out there for the slaughter and it wouldn't matter whether the season opened Sept. 15 or Oct. 1 the opportunity would still present itself  until the birds have been educated. Opening morning is opening morning.

Most of the reasons were selfish reasons just as my reasons are but one thing I do know is that once we give up part of the hunting season it will be hard to ever get it back. Adding 15 days in February is fine with me but don't give up the 15 days or so in September. The extra days would have little impact on the bird population. Personally, I doubt I'd take much advantage of the February hunt due to trying to heal up from all of my January falls on the hill.

Now I'll step down off my high horse and get ready for Saturday. The jury is still out on Grady.  I'm sure he'll be seeing lot's of birds. How he handles them and works with Jake while I'm carrying a gun has me as excited as kid at Christmas. Hopefully he'll do as well on the chukars and huns as he did on this grouse. 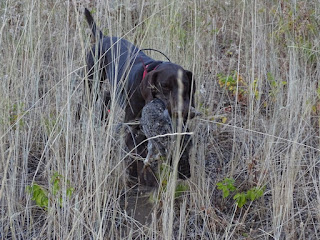