Once again I didn't have a camera on todays hunt. I wish I would have had a movie camera. Riley put on quite a show. He was a pointing and retrieving machine. The wind and conditions were perfect for a great hunt.

But one retrieve lasted about four or five minutes and was quite a comical scene. Luck was shining on me and I knocked down a double on huns. The problem was that I crippled both. Riley was on the first one quick. On his way back with the bird the second hun ran past him down the hill. He dropped the one in his mouth and was in hot pursuit of number two. He soon caught it and was bringing it back to me when number one ran back down the hill past him. He dropped number two and headed after number one who was still full of energy except for a broken wing. Further down the hill he finally caught number one but on his way up the hill had to drop it because number two was back on the run.

Well, you probably get the picture. The biggest problem with the whole thing was each time they ended up further down the hill. I finally told Riley to whoa once he had one of the birds in his mouth. I walked down to him and took the bird from his mouth. The bird was still as energetic as when the whole thing started. I then gave Riley the dead bird command. He soon caught the other birds scent and retrieved it back to me, still quite alive.

Sometimes you wish you could get in the dogs mind and see what they are thinking.
Posted by larry szurgot at 4:26 PM 4 comments:

Riley and I spent the last five days chasing chukar in Oregon. The best way to describe the hunting is fantastic. We hunted five different locations, put on lots of miles, gained a lot of elevation, and found loads of birds. I would say chukar hunting is as good as ever in Oregon.

Riley got a puncture wound in his right hind leg on the last retrieve of the trip. It wasn't anything real bad, except for a lot of draining, but he earned some time off all the same. He had a great five days. I decided not to pack a camera this year because the pictures have become quite redundant. Chukar country pictures and Riley pointing pictures. I never get tired of seeing this but enough is enough as far as the photos of him goes.

I had a real treat for three of those days. Greg Munther of Missoula Mont. came over and hunted with me. I just met Greg and am happy to say I hope to hunt many more times with him in the future. Greg is a living encyclopedia of the outdoors and a total outdoorsman. He knows how to cover the mountain also. Together with his GSP Lucy they put terror in many of the chukars flight. 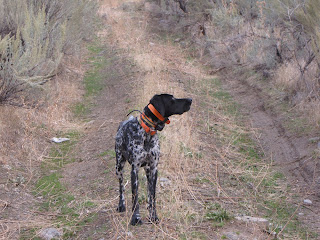 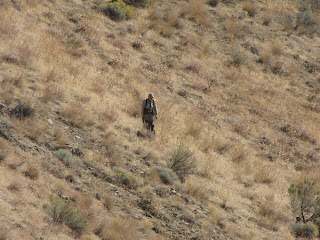 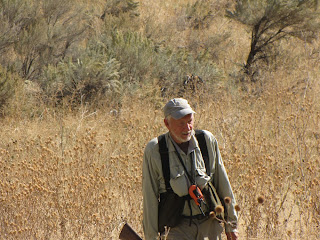 I'm hoping to meet many more of you chukar hunters in the future. Listening to others experiences and watching other hunters work with their dogs is (almost) as good as doing the real thing.
Posted by larry szurgot at 2:42 PM No comments:

The chukar season is in full swing now. The only thing that isn't swinging well right now is me packing the camera. It's been a little wet and that has made my laziness to carry the camera a little easier. So needless to say, no pictures yet.

The birds are out there. I have to admit to not seeing as many as I hoped, but they seem to be localized right now. So when you find them there is some great action. Luckily for me the limit in Idaho is only six chukars this year so my poor shooting doesn't really seem that dismal. For you guys over seas, I'm leaving lots for seed next year.

Todays hunt was probably the most exciting of the last seven in Idaho. Riley and I went to an old favorite for the first time this year. The birds were there just like they were rehearsed. The weather was overcast with a decent breeze. So up the hill we go. Riley busts the first covey of chukar and then settles in. He's having a great day except that every covey point is straight up hill. The good point to that is that is my better shooting angle. Slow risers. We finally get enough birds that I decide to start side hilling more and staying on the trails. Riley obliges and starts working with me and producing some good action.

Problem number one for the season came as I tried to crash through the brush in a steep draw. I've done something to my shoulder and can't lift my right arm above my head without feeling some pain. I started feeling quite a bit of it. I've already decided I can take the pain until the day after the season closes. Shooting and dog work was pretty darn good and we needed only two more huns so we started down the steep slope knowing there were huns somewhere down below.

As I headed straight down the hill problem number two showed up. Five and a half years ago I had a knee replacement. It's felt great until today. Each step downhill with my right leg sent a sharp pain through my knee. I was hoping that would never show up again but on a recent check up my doc noticed a pretty good bone spur and said we probably would have to scope that soon. Well, that's one more for the day after season.

So Riley and I found a game/cow trail headed down and towards the rig. The rain started to drizzle down a little but nothing to worry about. Riley goes on a great downhill point. One of those you wish you had a camera for, head twisted back over his shoulder with uphill leg cocked. As I slid down below him the biggest covey of huns I have seen this year erupted and blindly I shot a double. With my gun unloaded Riley and I started the half hour trek back to the truck. The only problem now was the drizzle had turned to a down pour and the wind picked up. I tried to take a route that would keep the wind to our back but that was in the wrong direction. To add to all this it started hailing and thundering. The cell was obviously building right above us. The hill turned into a mudslide and getting down was getting a little more exciting with each step. Finally it happened. The hill went out from under me and down I went. Luckily the rock my cheek met was flat. I knew when I hit it wasn't pretty but there wasn't a lot that could be done about it at the time. The amount of rain and hail pasting my face would keep the cut clean. Although swollen, at least this one will heal before the end of the season.

We hit the road about a half mile from the truck and that was the last I saw of Riley until I reached the truck to find him hiding on the windless side of the truck avoiding the hail. I opened the doors and we got in not caring how much mud we packed in. About a mile down the road not a drop of rain had fallen.

Anyhow, you guys that aren't able to get out this year, things haven't changed. There's plenty of birds out there and those who are willing to chuk up will be seeing lots of action. Just keep your health insurance paid up.
Posted by larry szurgot at 6:35 PM 3 comments: 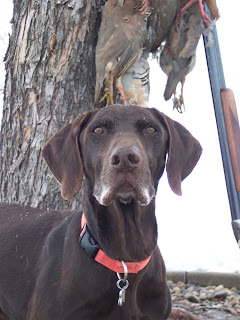 It was a great day on the hill as most are. It's always good going back to all of the great hunts I had with the best chukar dog I ever saw. Riley did him proud and my first two shells of the season performed like Tucker was there with us.
Posted by larry szurgot at 3:12 PM No comments: