Hatch around the corner.

With the Turkey hunting season behind us, Jake and I are going to be spending more time in the hills looking for babies. We took a couple hikes the last two days and were very excited about what we are seeing. Although the only babies seen so far are ducks and geese, most everything else should be close behind.We're seeing a lot of loner doe deer and cow elk which means they are getting ready to have a little one or already have one hidden out somewhere. As far as the chukar go, we've also stopped seeing the pairs but are seeing many solo's. The single birds aren't going far so I'm guessing it's the male trying to draw us from the female and nest. Usually if it's a hen with babies she'll put on the injury trick as killdeer do to get your attention.

I took a picture of this male chukar and showed Barb. She asked me how I could tell it was a male. After I pointed out it had a pecker, she informed me that all birds have pecker's no matter if they are male or female. 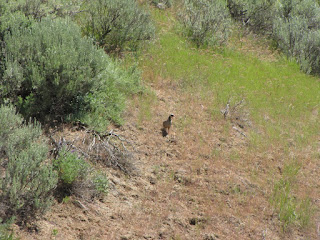 This wet weather is helping to keep everything green and I'm seeing loads of protein carrying insects. If the weather warms back up soon as predicted the chicks should have optimum conditions and survival should be great if the predators don't take over. 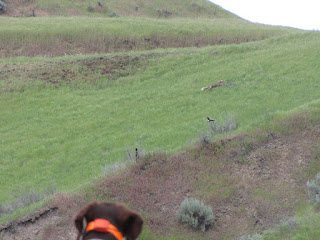 It may need a little predator management because it is a spot I normally see more chukars and huns than I saw today. 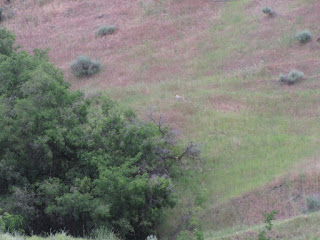 I'm hoping everyone is having a ball training those new pups or working with the old reliable ones and by this time next month I have some pictures of young broods to keep those dog's having fun in the upcoming season. Just think, Less than four month's before upland season and just over three months before grouse opens. Which reminds me, We have seen lot's of blues and ruffs this spring. Hopefully their hatch will be great also.
Posted by larry szurgot at 5:24 PM No comments: