Early June and still on the positive side.

Being retired, I get to spend a lot of time in the mountains with Jake and now Conner with school being over. I can't see a better way of spending days than what I do. But, that's enough about how lucky I am. I'm sure you're more concerned about how the chukars are doing.

First let me say I haven't found any babies or nest yet this spring but am still seeing very favorable conditions. Baby grasshoppers are showing up everywhere. I haven't seen one covey of chukars or huns in the last month which says they are paired and nesting as nature planned. The chukars I am seeing are singles and usually standing on a distant rock declaring their dominance. 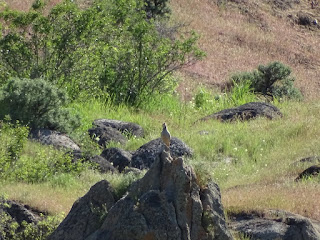 Outside of a good thunderstorm last night the weather has been optimal for a great hatch and I'm sure the chukars are doing as well as the rest of the animals I am seeing are doing. 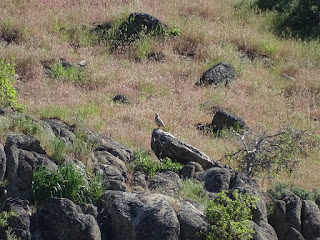 Even in the rainy weather the cocks are out on the rocks protecting their turf. 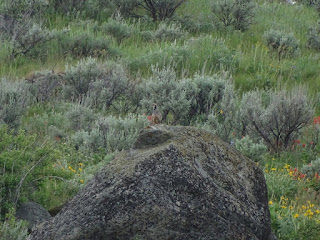 We are finding a lot of other signs of a favorable spring though. The big game animals seemed to adjust fine to the rough winter we had and we're finding loads of cow elk out with obvious calves somewhere. When the cow ignores you and is pretty intense on running your dog off it's pretty much a guarantee that their is a little one somewhere close by. 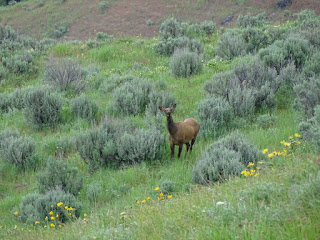 In this case I decided to get Jake out of the area. She was very unhappy with him. But on that same rainy day that the chukar was protecting his turf, this cow elk watched too curiously as Jake and I traveled her draw and she made no attempt to run away. 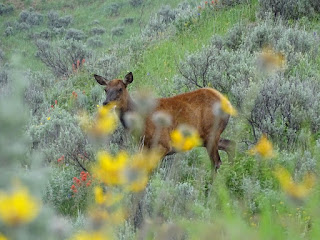 Sure enough I located her calf laying still in the open. Jake had no idea the calf was there and stood wondering why I whoa'd him. He would have run right over it before he smelled it. 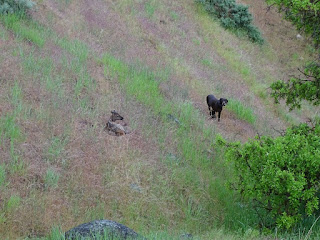 The calf did just what the instincts told it to do. Freeze, and don't move. 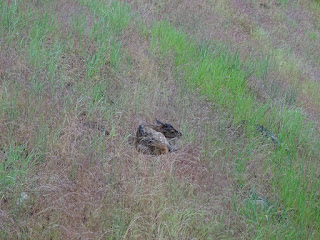 Jake finally walked up to me as I was taking some pictures and gave it a concerned look but left with me as soon as I said let's go. 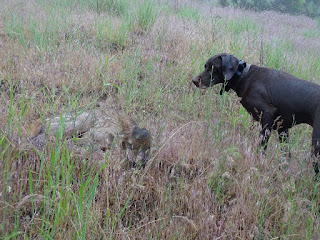 We've had a few other encounters with elk and calves and also with some deer. Conner, Jake and I have found several does with fawns but this gal was very obliging with her baby. 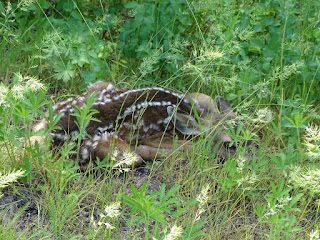 She didn't want to come out and get photographed but she didn't mind us posing with her baby. 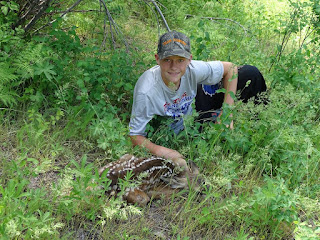 Of course Jake didn't want Conner to get all the excitement so we had to snap a shot of him observing the fawn. 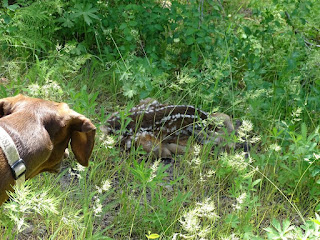 A little closer to our concerns about the chukar is the big bird (turkey). Their breeding habits and nesting times are very similar to chukars, except for the locations of where they do their nesting. I know that some will get very discouraged to hear this but Jake is a sure fire way to find any kind of bird. I know that it is illegal to hunt turkey's with a dog but it is not illegal to observe animals with a dog. Jake helped find these turkeys to observe. 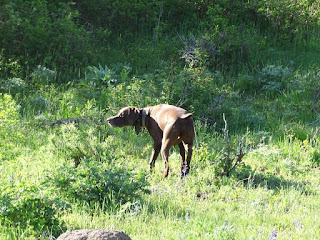 When momma stays close by and clucks constantly as you move in you know there are chicks close by. 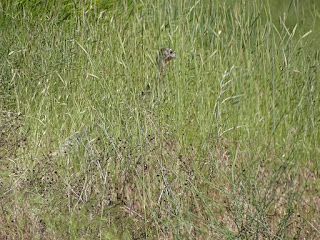 The trick is to find those little peepers. Trust me it isn't as easy as it might seem. There is one in this picture but we would never had found it had the grass not moved a little. 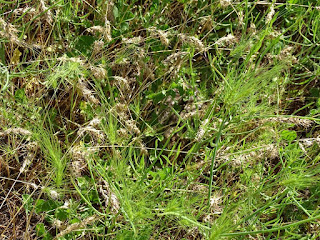 There were somewhere around a dozen chicks scrambling through the deep grass and Conner picked this one out hoping to imprint upon it to come to his call next year. 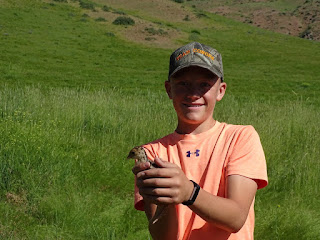 If all the other wildlife has done as well I think the chukar will have the same results. I think if we have no big cold and wet storms come through we're home free. Meanwhile Conner, Jake and I will take the arduous task of hiking the hills and trying to keep you informed of what we are seeing.

Be safe and have a good summer.
Posted by larry szurgot at 4:01 PM 10 comments: