Jake and I finally got to go to some real chukar country. With the weather cooling down some and a little moisture on the way we decided to head west. Our timing was almost perfect. We set up camp Tuesday evening and woke to a 60 degree and cloudy morning. It was a little warm for 7 a.m. but that turned out to be the high for the day.

After hunting up hill from the reservoir for about an hour and a half, the breeze blowing on my sweaty back started getting a little stiffer and colder and we could see the approaching storm about to hit us. 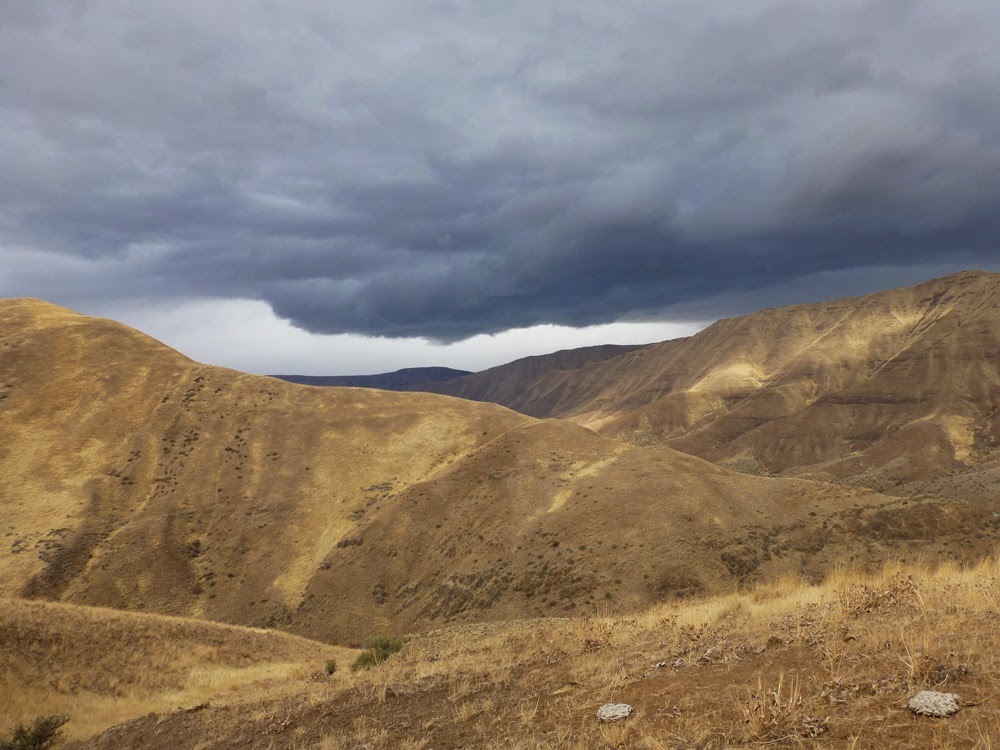 The wind hit first and at times it was hard even walk against it. But that didn't stop Jake. He didn't seem to have a problem deciphering the different smells to figure out which ones to point. 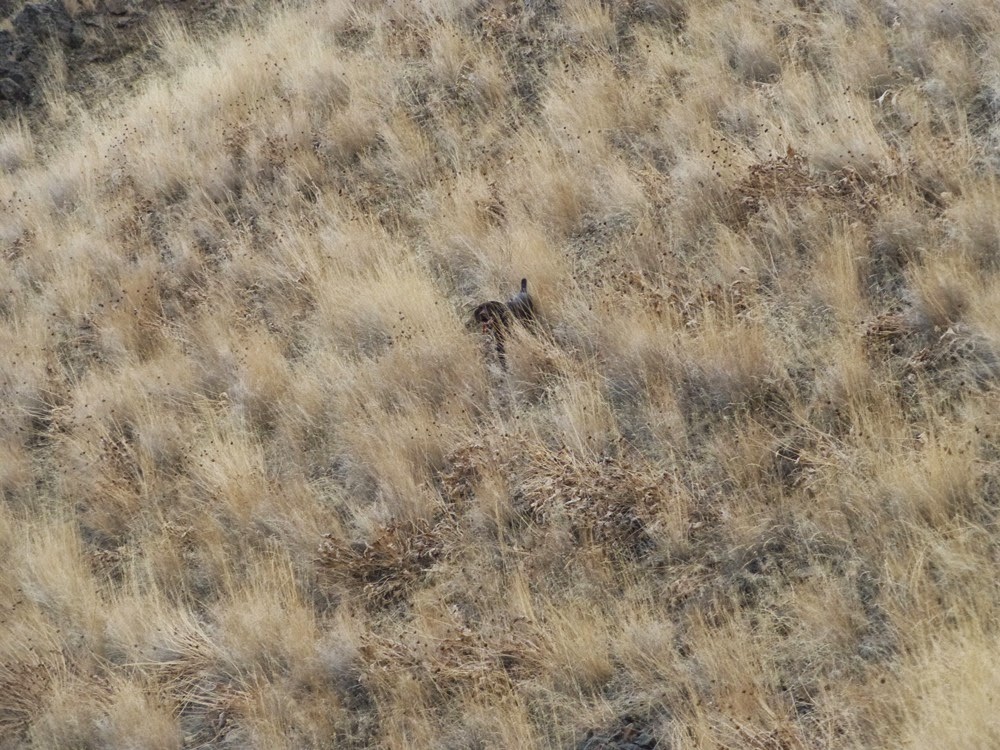 He was proud of me for shooting so well in the windy conditions. I kept it to myself that the birds that dropped were usually 20 feet from the one I was shooting at. It wasn't long before the rain joined in with the wind and I was soaked. I've been wondering how Jake would handle the rain since he doesn't like swimming. I was pleased to see the water logged dog hunting hard all the way back to the rig. Oh, did I mention that I got a new utv to keep from beating my truck up on those rough roads. Golly Gee, they are so comfortable to ride in when you are soaked to the skin and you have 10 miles to travel in the cold wind before you get back to your enclosed truck. Jake just rolled up in a ball and kept his head hidden under my arm.

Day two was much kinder, 42 degrees and overcast. We had a strong breeze from the south that kept Jake's nose busy most of the morning. Jake finally stretched his distance out and has expanded his range back to about 300 yards. I'm pretty sure he busted a couple of covey's but usually he'd reward my struggling up the hill with a point. 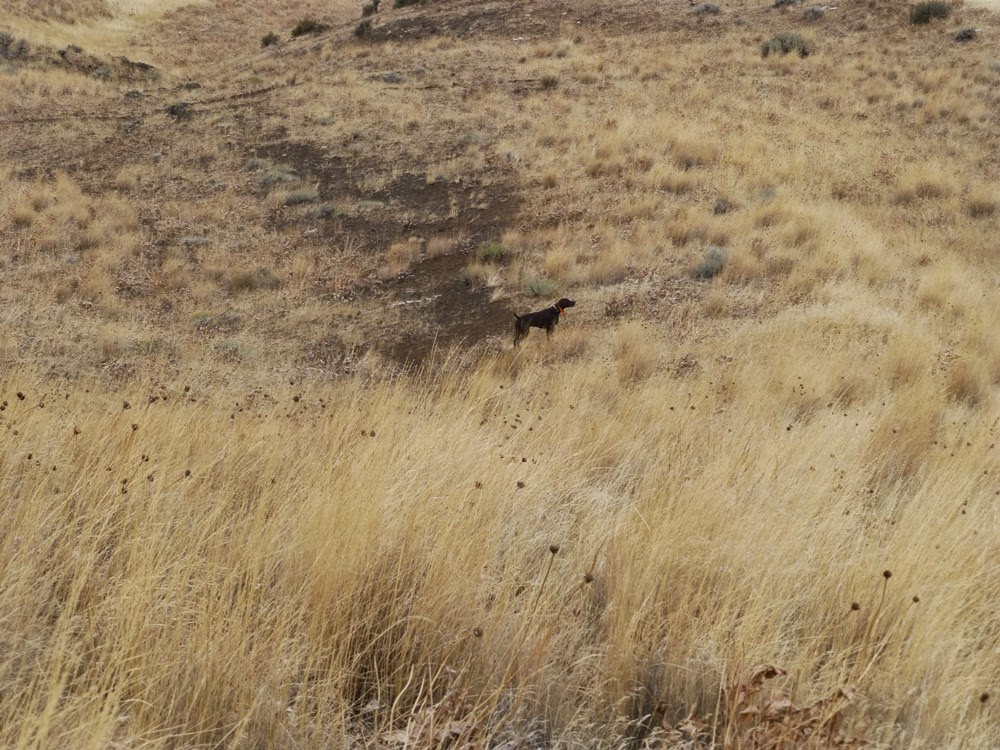 What I did with the gun is left for only Jake and I to know. We had our best day on day two and Jake wanted to show off his trophies. 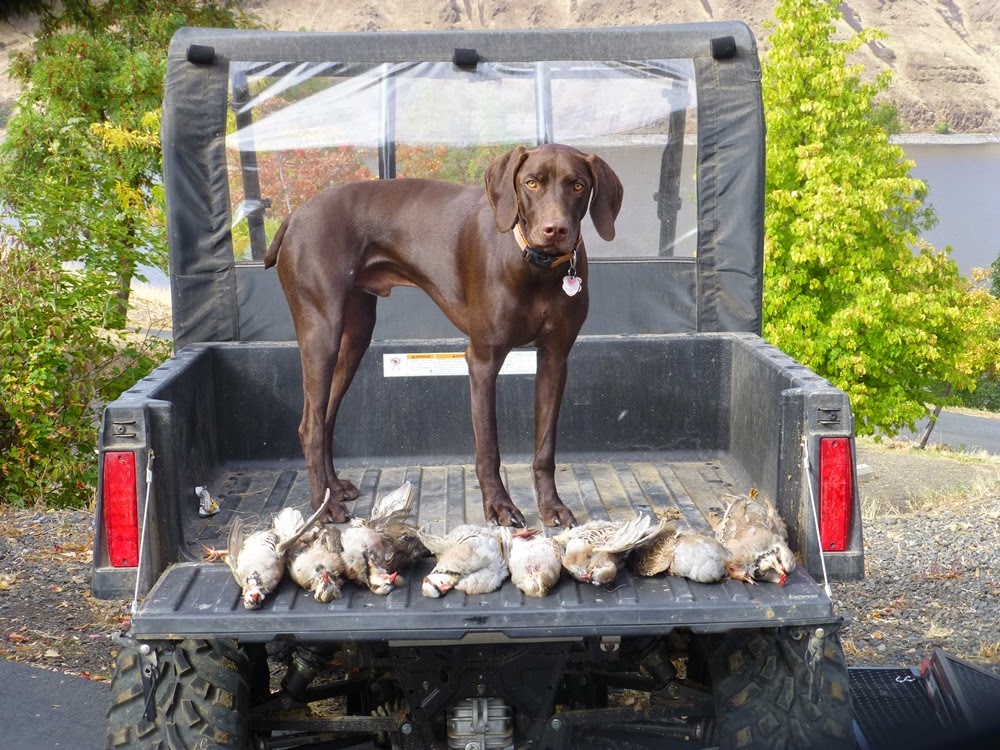 Knowing Jake and I can't take care of ourselves for more than two days, Barb showed up to take care of us for the next three days. Man, it was great to have a good meal. While I was cleaning some birds for Barb to cook a fellow chukar hunter stopped by and introduced himself. Kevin knew me and vice versa through Upland Idaho and we exchanged some dog stories and than he pointed out that the grouse hunting was pretty good. I took his advice and headed towards the timber edge for a grouse chukar combo which turned out well for Jake. 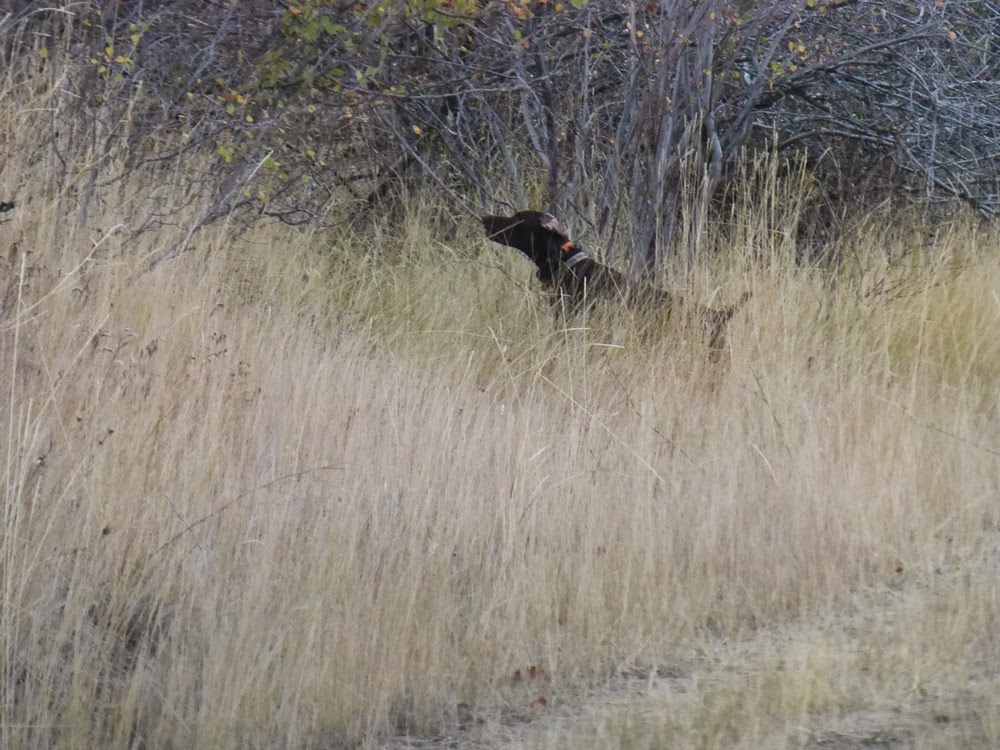 Not bad for me either. 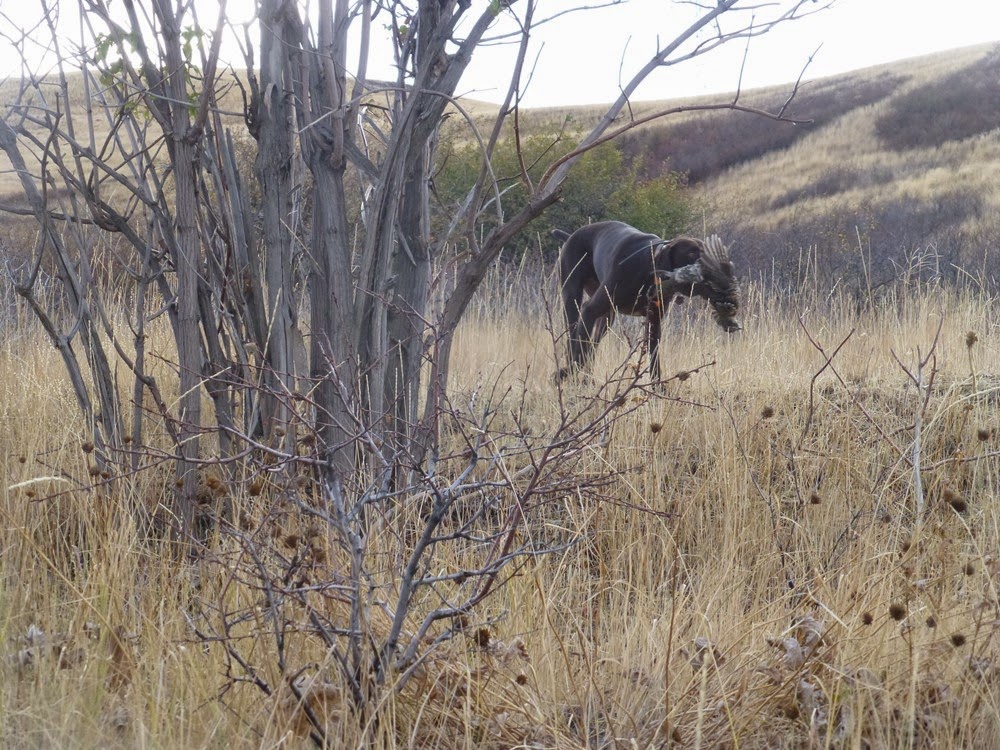 The rest of day three and four were pretty much the same. Not tons of birds but enough to keep things interesting. Although the temperatures never got above 60 degrees, when there are no clouds and the wind is still,  60 degrees it soon chases you off the hill and with Jake favoring his right front leg we decided to rest on day five. In our four days of hunting, Jake covered over 78 miles and I did 26.

There's nothing more exciting to me than watching my dogs work. Seeing them do what they love, searching for birds with their nose high in the air and then suddenly lock on point is as exciting as it gets for me. But, chukar country offers so much more than just bird hunting and today I was lucky enough to observe one of the mountains wonders.

I wish I could put words together like the "Noisy Plume" can to describe my encounter or had a telephoto lens to snap pictures with to let you see it, but I don't, so you'll have to trust me when I say it was spectacular.

I'm sure many of you have seen rutting elk in the past, as I have, but this was the first time I just sat and watched them for an hour and a half before they disappeared over saddle. The last time I saw rutting bulls like this, I was hunting them so I never got to appreciate how hard a bull works to keep his harem.

As Jake and I ascended the mountain range, I thought I heard a distant bugle, but didn't give it much thought since it seemed so far away. Fifteen minutes later, the roar of an elk stopped me in my tracks. It was so loud, I thought he was withing fifty yards of me. The hill side was wide open with nothing but Jake on it. I looked across the canyon and there were about a half dozen cows watching Jake covering the country. I'm talking domestic cows. I'm starting to think my hearing is really screwed up when another bugle blasts me. Then, I see him about 200 yards away and about thirty yards below the cows. I've seen a lot of elk, but never the real big ones. Those that score 350 plus. This was as good of a six point as I have seen in the wild. I would guess around 320 or 330. Through my binoculars, the big boy gave me every possible view I needed to judge his magnificence.

As I sat there watching, more and more elk appeared, until there were about 50 head intermixed with 8 domestic cows. Some of the elk watched Jake running back and forth with curiosity and when he came and sat by me they went on with their browsing. There were two other five point bulls keeping their distance from the big guy but trying to intermingle with the cows any chance they got and a couple other rag horns and two spikes that kept their distance. Every once in a while a couple of the cows or yearlings would stand on their hind legs and punch at each other as if they were sparring.

The big bull worked the cows like a cowboys horse would work domestic cows. Although I know of no water holes in this area, his right side was solid mud. Every time one of his harem would wander off he would stretch his neck out and make a sprint to move her back with the herd. Afterwards, he would stop and grunt, showing his dominance. Only twice more did he let out a full blown bugle. At one point he had more than half of the ladies pushed up along a fence line running across the hillside. He slowly walked about twenty yards above them as if he were counting them.

Elk must not be able to count well. Over a little rise from the main herd, 8 cows and calves started walking in the opposite direction with the two five points in pursuit. The two younger bulls put on a display of their own. They never bugled but would trot back and forth on the hill side paralleling each other and seeming to be sizing each other up. Twice they stopped and faced each other as if they were ready to duel but never got it done. Eventually those ten elk disappeared over the ridge.

Meanwhile, the main herd finally got over the fence. The cows would just stand on their hind legs and almost step over the highest strand. The calves were a little less sure of themselves and paced back and forth along the fence line until the distance between them and their mother's gave them the courage to make the simple jump over the fence. At this point the big bull was showing less aggressiveness and feeding as he mingled out in front of the cows. The two spikes were now with the cows and the big bull seemed to be okay with it. The two rag horns still kept their distance.

As the sun started hitting the ridge where the elk were they started dispersing more and the bull started moving towards a shaded canyon. His interest in the cows was gone. Two coyotes came over the ridge and walked among the herd as if they belonged and the elk hardly even acknowledged their presence. The elk slowly spread out, feeding their way over to the shaded draw. The two rag horns were now with the herd and feeding. The excitement of the morning rut was gone. The heat had sent the elk to a cooler spot, just as it sent Jake and I back down the mountain to come back on a cooler day to find the birds.

Although Jake and I ended our day as just a sight seeing tour, I still have Conner out there putting meat on the table. This weekend he managed to shoot a 15 inch antelope as well as shoot 1 pheasant, 8 quail, 5 pigeons and 2 doves on the youth pheasant opener with his dad. With all that he still had time to play linebacker in his optimist football game, which they won. I hadn't even held a gun when I was 12.