I can't begin to explain how long the last five months have been for me. It all began Jan. 30th, when Riley came up lame in his hind right leg. It was our last hunt of the 2011-2012 season. I was scheduled to have shoulder surgery in four days, so I waited until after surgery to take Riley in for a check up. My fears were soon answered when the vet announced that Riley had blown a knee ligament and needed surgery. Riley had his surgery on March 6 and everything was going well until week 11 post op.  While rehabbing Riley blew his left knee. This was just another set back and he had operation #2 May 23. It's over five weeks since his second operation and we have over 10 weeks to rehab before the season opener and suddenly Riley gave me reason to believe all might be lost.

Riley has been healing very well and his limp is hardly even noticeable. We've been (trying) to take it slow. The knees are doing great. But todays series of events make me wonder if five months out of chukar country has made Riley brain dead. Come out to the pond with me and you'll see what I mean.

While trimming some trees I lost track of Riley. I looked around and finally saw him laying in the shade by the pond. There were a few geese within 20 to 30 yards from him and some others in the pond. This didn't bother me until I watched a pair of geese with their 7 half grown babies walk about 20 yards from Riley and join the others on the grass. Riley just lay there in the shade between the geese and the pond. I thought, this isn't going to be pretty, but Riley just watched them go by. I had to go inside and get the camera. 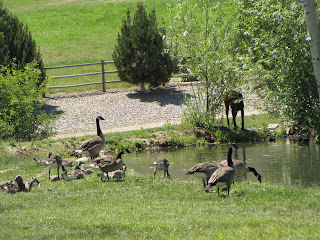 By the time I got back Riley had stood up, but still watching over his flock. As I moved in to take a picture the geese eased into the pond and away from me. Right behind them goes Riley. He isn't supposed to start rehab for a couple more weeks but I decided "what the heck". The geese just swam with Riley as he seemed to be counting them as a good herder would do. 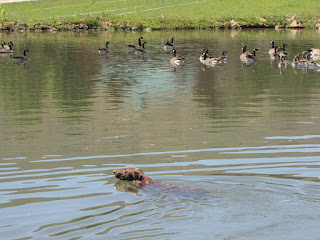 After he was satisfied to the safety of the geese he trolled over to the shallow end of the pond. For the next half hour Riley stood in the water chasing and pointing fish. He would stand there and follow the fish with his eyes, slowly moving his head towards the water and than going under. 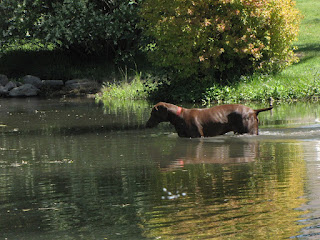 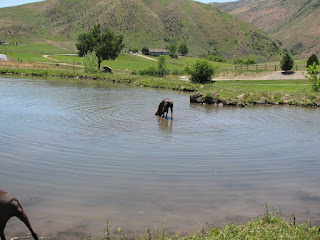 After a while he even figured out how to herd the fish towards the stream and slap at them with his paws. During all this time he'd look up and watch the geese graze across the field without showing any excitement to give chase or point. He just went back to fishing. 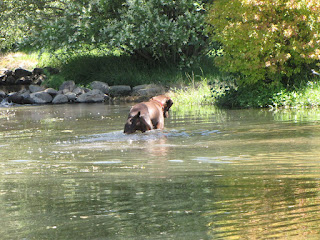 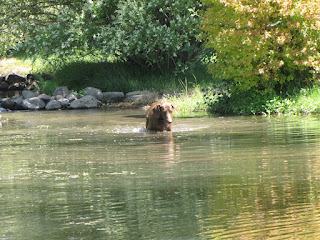 Two problems have been created by todays activities. Number one, I didn't spend all that money on two knee operations to have a fishing dog. Number two, I already claim to be world's worst fisherman. How embarrasing if he starts catching the fish that I can't. Man, I hope the work and efforts of the last five months is for not.

Maybe we should just take up golf. I'm sure Riley would let me caddy for him.
Posted by larry szurgot at 3:22 PM 1 comment:

For those checking in here from time to time to keep track of what happens on canine knee operations, or tplo, we had a new development today. It is week 14 of the right knee operation and week three of the left knee. Everything has been going as planned until yesterday.

Three times yesterday Riley let out a painful yelp as he got up and sprinted to hide behind me. The best way to describe what happened is to see the reaction of a dog shocked with an e collar on high and the dog not knowing where the pain came from so he runs to your side for protection. The pain was obviously of short duration but man was Riley shaking afterwards.

I took Riley in to the vet and we took some xrays to make sure the knees and plates were okay and everything was positive. Dr. Stoehner did mention a small tear in the meniscus of the left knee which he repaired along with the tplo but didn't feel that there was anything else wrong as far as he could see. I remember feeling sharp and quick pains in my knee when I had a torn meniscus that always subsided quickly. That is how Riley reacted yesterday. All we can do now is watch it and hope it doesn't happen anymore. It possibly might just be some of the soft tissue healing. I'm hopeful that is the problem. If not it's a matter of going back in to try and find the problem. Hopefully arthroscopically.

The big problem I see ahead is knowing which knee might be the problem, since they both have been operated on. I'm hoping that this is the last of this issue and knee two continues to heal as well as knee one did. If so we'll be on the mtn. pestering chukars by October.
Posted by larry szurgot at 9:50 AM 2 comments: