We've been having a fairly mild December making the hills more accessible for both hunter and birds. Of course the chukars are much wilder now but luckily with good dog work, I sometimes get to those far away points. 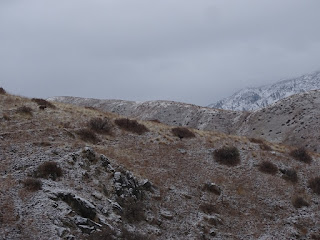 Boy, how I love hunting behind these two. 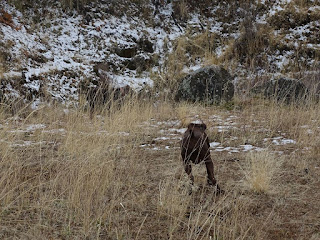 Grady really puts on the miles (averages about 24 miles per hunt) but has become a great bird finder. 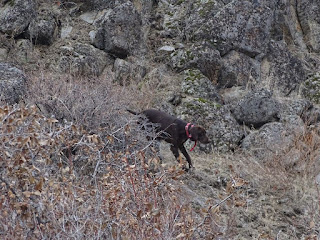 He also loves the retrieve.

And sometimes I do my part. 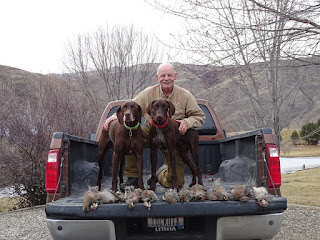 Posted by Tuckers Chukars at 9:27 AM 2 comments:

I was waiting to do this post until I got a few other success pictures from other hunters but either the success isn't out there this year or hunters are too busy having fun they don't have time for pictures. I think it's the latter.

Anyhow, I was corresponding with a hunter from Utah, Riley Galt, who hunts a lot of the same areas I hunt and he sent me some pictures of his November hunt to Idaho.

He spent a week in Idaho with a buddy hunting quail, huns and chukars and it looks like they had a good time and good success. Their week was in all kinds of weather from warm to almost getting snowed in but they made the most of their time by being on the mountain putting lots of miles on boots and dogs.

Here's a picture of Riley. I assume he is just beginning the hunt because he is smiling. 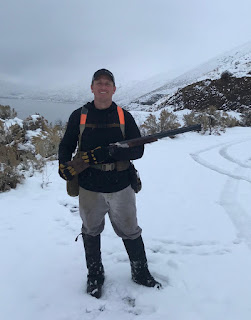 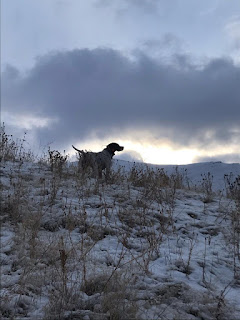 Especially when you get to a stylish point after trekking through the snow. 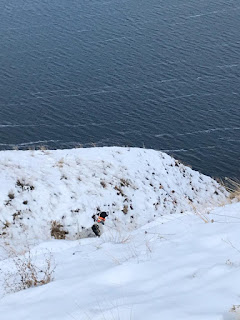 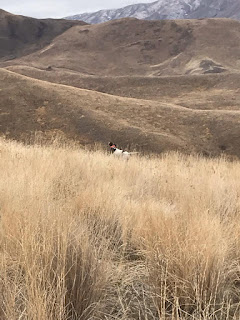 But late November hunting leads to more points in the snow than the open country. 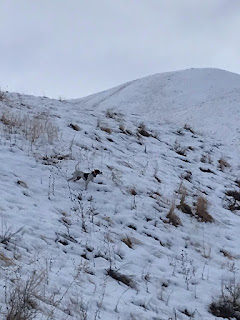 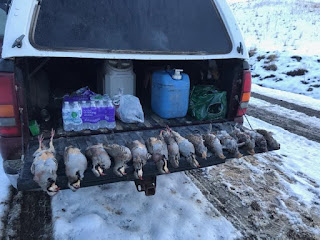 Thanks for the pictures guys and I hope to meet you soon.
Posted by Tuckers Chukars at 12:37 PM No comments:

Made this short video today as the boys and I sat by the fire and looked at past and current pictures and videos. I'm just practicing for the day that I get some really good stuff. Filming good dog work in chukar country is hard. You very seldom get to see them lock up on point. You just know it happens and you get there. I've got literally hundreds of pointing pictures and retrieving pictures but very little video that shows the good dog work my boys do. Also, since I usually hunt alone, it's impossible to get a video of the dog pointing and me shooting a bird off the flush. Maybe I'll get that figured out one day but until then I'll just keep recording my memories.
Posted by Tuckers Chukars at 3:52 PM 1 comment:

Another bout with a sticky kitty

First off, I don't mean to steal my hunting partner's name for porcupines, but when he told me what he called them I had to use it  the name. Thanks Greg Allen, it fits.

Yes, it happened again today. Grady decided to get a taste of a sticky kitty. The day was getting off to a bad start as it was. We started hunting a fog that looked like it would rise but instead it got thicker. Greg took off one way and I the other in search of the chukars we saw tracks of on the way in. Chukar hunting was pretty slow and the few coveys we saw never got lead thrown their way. Either they disappeared into the fog too soon or I couldn't shoot not knowing where dog two was. About 45 minutes into the trip I finally got the signal that both dogs were on point about 150 yards away. I crunched my way through the snow and finally could see both dogs locked up. As I moved forward I could see a few bird heads sticking out of the snow and was ready to move forward for the flush. Suddenly Grady broke and I saw the sticky kitty by the sage. I immediately yelled but it was too late. Grady had a mouth full. I don't even remember hearing the birds flush and maybe they didn't. They may still be up there chuckling about the fool on the hill.

Crap happens and at times I feel like I'm stumbling over it too often. There were about 50 to 75 quills in his lips and mouth. Far less than Jake had two years ago and not that deep so I decided I'd pull them on the hill. Now you have to understand that Grady isn't the toughest dog on the hill and I found out he doesn't like pain much. The whimpering at each quill being pulled was pathetic but he started to put up a fight. I had never used a stiff hand on Grady but now the fight was on. There was a lot of tugging and pulling and yelling by me but I finally got him wedged in some snow deep enough that I could sit on his chest and finally get a good hold. He calmed some and I quieted down some also. Ten minutes or so and we had the job done except for a few deep down and broken.

Jake just sat there and watched more like a referee in case we got a little too rough. Things like this happen to almost all hunters at one time or another but it's how we handle them that is important. I had the right tools but I'm not sure I was of the right mind. I've always said how nice it is to hunt the mountain and never say a word. Silence is beautiful. Greg was on that mountain somewhere and either he didn't hear me or he was being kind and never mentioned I sounded like a raving lunatic on the mountain.

Although everything came out just fine I have to admit I could have been a little quieter. I was a wrestler in high school and I don't remember ever yelling at my opponent to hold still but as I wrestled with Grady I was pretty vocal for him to hold still. Point is, after I calmed down a little and let Grady calm down a little it was fine. Calmer heads usually get the job done easier than panicking.

Good luck in the next 55 days or so and watch for those sticky kitties.
Posted by Tuckers Chukars at 7:48 PM 4 comments: