I know many of you have had this same thing happen. Early in the hunting season you drop a bird dead and your dog runs over the top of it and can't find it. He knows there is a dead bird but can't get it's scent. I've had it happen many times. I've even had a dog standing right above the dead bird like it doesn't exist.

Now let's go to my front yard with a gravel drive way about sixty yards long. I can pick up a piece of gravel that is about the same size as the other hundreds of thousand gravel pieces and mark it so I know it from any other and throw it into that sixty yards and Jake will find it almost every time. I know he's smelling my scent on the rock but I can't understand how he can smell that better than a dead bird unless I stink more than a dead bird. I can possibly believe that but I have had Barb do the same thing with the same results.

Why? And don't tell me Barb stinks also because she's a good shot and she'll find you.

The Good, the Bad, and the Cute.

I just got back from a four day camping trip and couldn't wait to get out and check on the nests I found earlier this month. I've been trying to keep track of them to find the date of hatch. There were five nests, two turkey, two chukar, and a hun. I also found a second hun nest (I believe) on my drive. I saw these two huns in a hay field and decided to look for a nest. After about a half hour I located a smashed nest from a tractor tire and assumed it was their's. 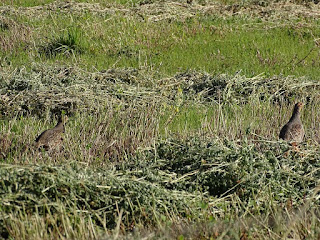 The other hun nest I found earlier looked to have had a clean hatch and I counted an even dozen eggs in the nest earlier this spring. You can tell if the eggs were hatched or destroyed by a predator by the way the eggs are cracked. Chicks peck a fairly even circle around the egg in order to free themselves while a predator destroyed egg will be broken randomly and often not even be there anymore.

The two turkey nest results were the same as the two hun nests. One success and one failure due to predators. 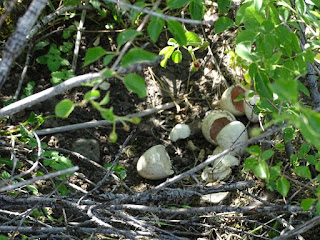 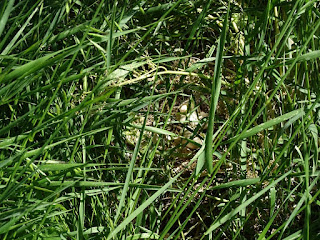 Sadly, the chukar nests were the same. One successful and one not. 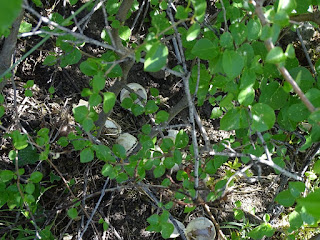 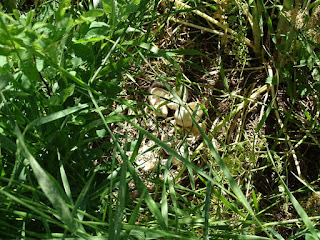 Outside of the successful turkey nest was a full egg which must have been infertile. 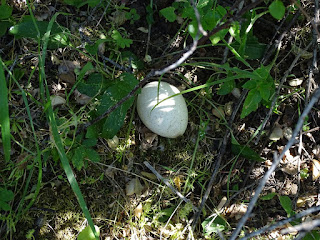 The five nests I discovered were hatched out or destroyed some time on the 16th, 17th or 18th of June. This is pretty consistent with past years on what I have seen. Hopefully the birds that lost their nests will renest and in about 40 days we will have what is usually called the second hatch.

Mother Nature has been kind and we're getting a grasshopper hatch at the right time. I see all kinds of tiny little hoppers everywhere. The birds should be eating well. It's hard to see just a 50% survival in nests but that's what happens in a world with predators.

Survival of the chicks hatched now depends on insects and weather. If we have just a little moisture in the next couple of months we will be looking at a perfect scenario.

So there is the good and the bad before summer hits. The cute are these little critters we got to see as we headed back to our truck. Mom tried to distract us but we knew if we looked hard enough we could find one of her babies hidden in the grass. 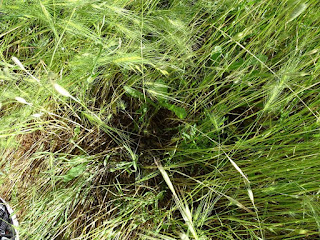