Day off to contemplate

We're about half way through the chukar season and the boys and I are taking this Saturday off and enjoying some college football. I'm also doing some heavy thinking about this weird hunting season. I've had many hunters tell me they're having a hard time finding birds this year. I have to agree even though I am having a very good season.

October had some early moisture followed by very cold temperatures. Even with the cold temperatures, the grass popped up everywhere. Like normal, the birds scattered everywhere because the fresh sprouts were germinated. Mid October, I was finding small coveys of birds both high and low. Then the warm November temperatures and lack of moisture started drying everything up along with the green sprouts on the southern exposures where the chukars usually tend to use this time of the year. Many of the places, you could drop a match and start a fire. My yard is a perfect example. It is dry as a bone.

The birds I am getting are full of green grass and the coveys are once again congregated. Most of the green grass I find now is on the northern slopes and anyplace the sun doesn't hit directly for most of the day. Even though I see plenty of grasshoppers on the southern slopes I have not found any in the crops of the birds telling me the nutritional value to the birds is more towards the grass than the hoppers.

The birds are very healthy looking and I have been surprised that even the later hatched bird are developing a good layer of yellow fat. They are obviously eating well and prepared for the winter months.

My biggest thought on this season is the two hour rule. It takes two hours of humping the hills to find chukars and then the fun begins. You get your birds and then have a two hour trek back to the rig. This year the two hour rule has been stretched out some. Usually four hours is enough time to have some good success but this year I'm spending 5 to 6 hours on the hill to have the same success as the past. I believe I'm seeing more birds than normal, it is just taking me and the dogs longer to find them. It also could mean I'm getting a lot slower than I use to be but that's hard for me to admit.

So, don't lose faith. I believe some wet weather will soon make it easier for the dogs to find those birds and create some fun experiences.

I've also got some thoughts on Jakes strange behaviors this year. Although he will only be 7 in January he covers only 3/4 of the distance of Grady who is almost two. In fact every once in a while he'll walk behind me on the trail while Grady is out 200 to 300 yards looking for birds. It worried me at first but I've decided as long as he is having a good time and Grady is too I'll stay out of the way and let it be. Jake still gets plenty of points and retrieves and he seems perfectly happy to see Grady at a distance and honor. Last year he didn't seem to ever be looking for Grady but this year maybe he's got smart and decided to let the young guy do the work and he still gets to be in the action.

Sometimes Jake won't see Grady on point but knows he is by the way I am carrying my gun and moving towards a point. He'll honor me but slowly circle behind me until he see's Grady. He'll then either honor Grady or swing around behind me and try to come in and trap the birds between them. At first I whoa'd Jake but am now letting it be what it is. Grady stays locked up and doesn't appear to feel like there is any competition in this behavior.

As far as Grady's honor, it is very solid and he won't move until the flush. Grady's problem is also human  caused. Since he chases flushed birds a little further than I like I've worked on him a little on stop at flush. I've had multiple 200 yard points out of sight that by the time I got there Grady would see me and then just go on hunting. There were no birds. On our last trip I saw him bump some birds and stop. My Alpha told me he was on point and he once again stood there until I got to him. Hopefully he'll eventually quit this and save me those 200 yard hikes up and down the mountain to a pointing dog that has already flushed the birds.

So, I came up with two thoughts to help get more birds this year. Both aren't good for us but will help with success. First, until this weather changes, it's going to take a few more miles than usual and second, get out of the way of the dogs and let them do what they do best. They are a heck of a lot better predators than us so start listening to them and quit worrying about how they get the job done. Some day maybe I'll finally get that figured out.

Good Luck
Posted by Tuckers Chukars at 10:49 AM 2 comments:

A few weeks ago, Conner took me duck hunting, something I haven't done for more than 40 years. I was impressed with how he could turn the ducks into the decoys and as you can see we had some great success. 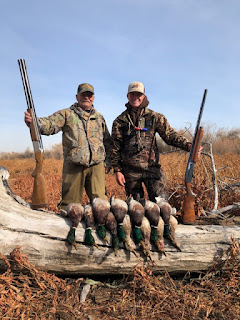 Last Friday night, Conner invited me to a Duck's unlimited banquet along with his mother, brother and Barbara. We had a great dinner, met lot's of good people and had a great time once again. To top it off Conner was drawn for a rifle and two shotguns in the raffles. Unbelievable. Since he is only 17, I had to do the paper work and pick the guns up at Sportsman's yesterday. 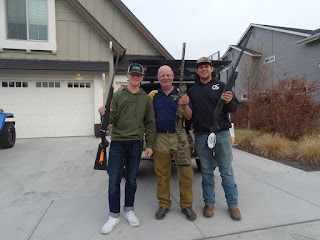 Since Conner had school, I decided to take Jake and Grady to the big pond and chase some chukars and then come back through Boise on the way home. I know tailgate pictures aren't always cool but I snapped a picture of the dogs success also. 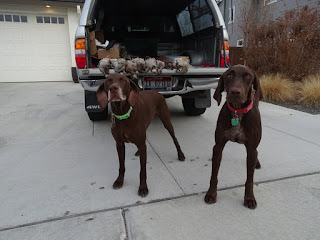 Barb, the dogs and I spent 4 days over in Oregon last week and had a great hunt. Greg Allen and his girls came over on Saturday and hunted with us at one of our favorite hunting spots.

The hunt was very successful even with the super dry weather. Waking up to 20 degree temperature and having no frost on the wind shield is proof to the dryness. Also the crust of dust on the dogs noses at the end of the day made it obvious why more birds were bumped than usual. The plus side of the dryness was that it was easy to find bird tracks on the game trails thus keeping me excited even when the dogs weren't acting birdie.


Covey finds were far to often to keep count and day one for me was one of those great days. The dog work was great and I shot as well as the dogs held the birds. 8 for 8. That doesn't happen too often. 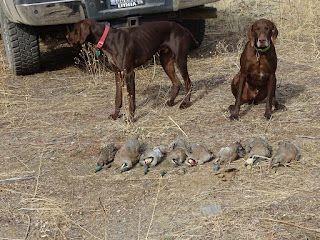 The following two days brought my average back to normal but it was still great for the dogs. Jake stayed at the camper on day two and Grady stayed there on day three. I figured out why Jake was ranging less and staying closer to me. I had the water and treats. Instead of giving him water every time he walked behind me I told him to hunt em up and he soon figured out I had figured his gig up. He started covering country like normal.

Every morning we would drive through Huntington, Oregon and their marijuana patches and Greg was wondering if maybe I was sniffing the air as we passed. I had two unusual sightings on the hill that day with no pictures to back them up. First off, I saw a nice bighorn ram. We have hunted that range for over thirty years and never seen even a sheep turd so I knew I had to chase the sheep down and get a picture for proof but you know how that ended up. Never saw him again. The second sighting was off of one of Jake's points. As I approached  his point a single chukar took off using a Juniper tree to block any chance of getting a shot. As I swung around the tree waiting for more chukars to explode suddenly about a dozen chukars flew out of the tree also using it for cover so I couldn't get a shot. I have seen a single chukar in Juniper tree's before but never a covey.

Greg was very kind in keeping back the laughs as we drove back to camp and I told him my stories.

The birds were in great shape with lot's of fat reserves ready for winter. Barb and I hung around the camp sight on day four giving the dogs a break since we had such a successful first three days. We only needed two more birds for a three day possession limit.

On my way home I stopped by in New Plymouth and finally got to meet Alan Howell and his girl Gracie. Alan and his wife Kate moved to Idaho from Alaska for the bird hunting opportunities and their setter Gracie has been providing them plenty of of great points.

On returning home I had some great messages from other hunters having great success also. There was a note from the small Munsterlander, Oakley who had finally got her master (Mark Midtlyng) trained and Having some great success. 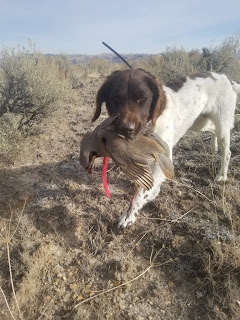 By the success picture, I'd say Oakley and the other dogs are proving their worth. 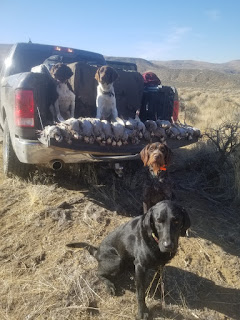 I also got a note from Quinn Inwards telling me of the passing of his young shorthair Sage and the sadness of losing his first hunting companion. Like a true bird dog lover he is keeping her close to his heart but moving on with a new pup. Quinn is now training Joker, a GWP which besides being a good looking dog 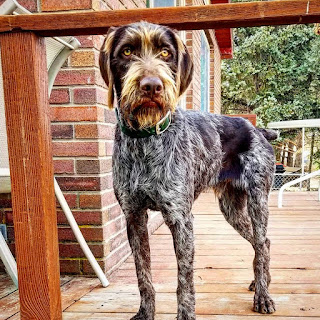 is already showing some great style.

Last week seemed to be a good week for bird hunters and I think it will even get better once we get a little moisture on the ground helping the dogs use their nose. There is a little over two and a half months of bird hunting left so get those canines out their and let them show their stuff.

Good Luck.
Posted by Tuckers Chukars at 8:19 AM 2 comments: