It's 149 days until the chukar opener in Idaho, but who's counting.? I've decided that nobody loves chukar more than I do. Everyday Jake and I aren't on the mountain I'm looking for some kind of new entry about chukar hunting in the internet. It's pretty dull theses days. I get  about two views a day this time of the year compared to 25 or more during the chukar season. If I post the words "chukar count" all the sudden it jumps to over 100. Chukar hunting to most is just a fill in season. It hasn't always been this way, but I now would rather spend a day chasing chukars than hunting a big trophy bull elk. If I could find something to say, I would post everyday Jake and I go on the mountain but that would become pretty darn boring to most.

But, like everyone else, I need to find different ways to pass the time until bird season opens. Having a outdoor grandson helps a bunch. Conner not only goes on hikes with Jake and me, he also likes to challenge me to a rock chuck shoot or show me how to down a gobbler. 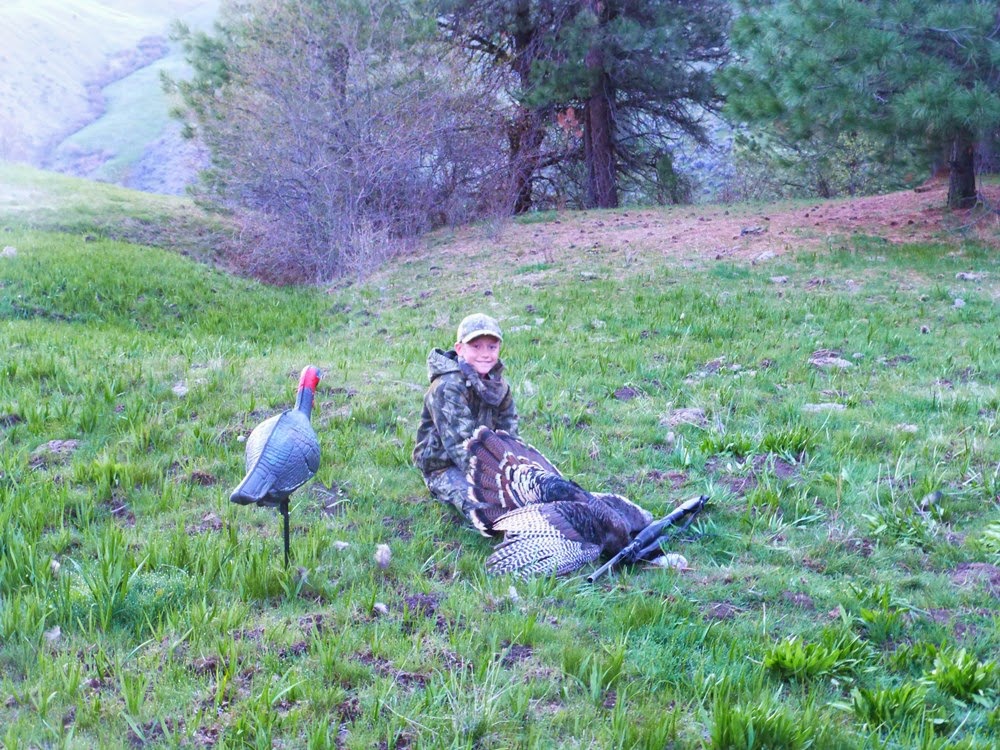 He then likes challenge me on being first to get back to the truck a mile away while he packs the bird. He might have been a short hair in his former life the way he can traverse the hills at 11 years old. 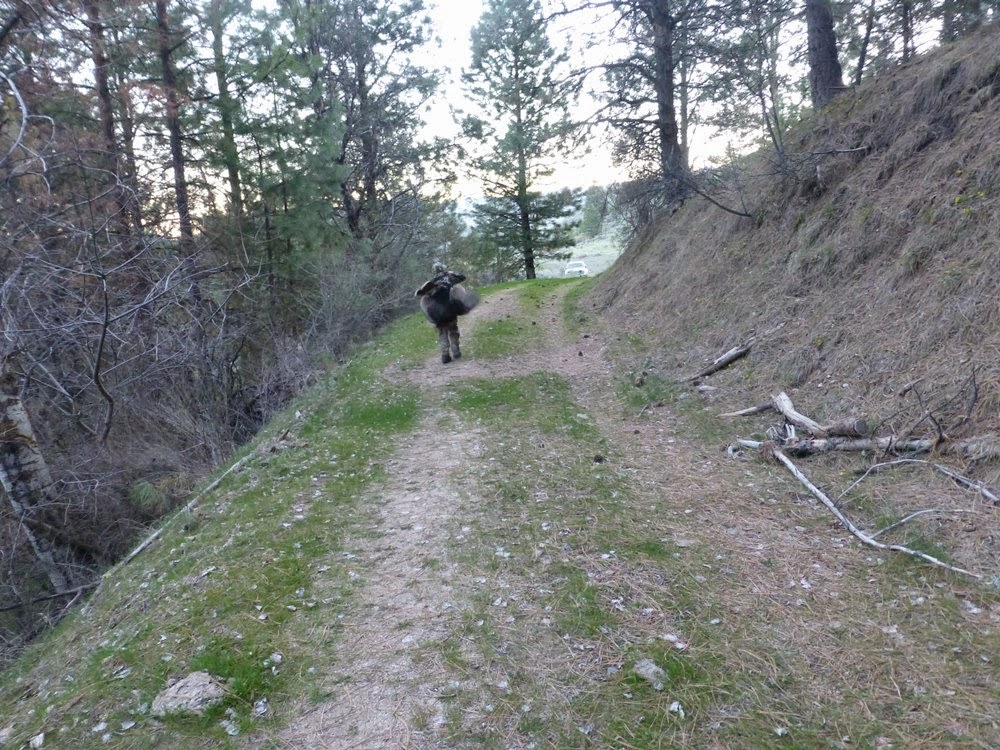 But I got the last laugh on him. A few days after he shot his turkey, I took advantage of him being at school and took my own little hunt. It took me a lot longer than it did him but I finally got a bird at 11:35. Conner had his shortly before 7:00. But I think mine was bigger. (So I tell him.) 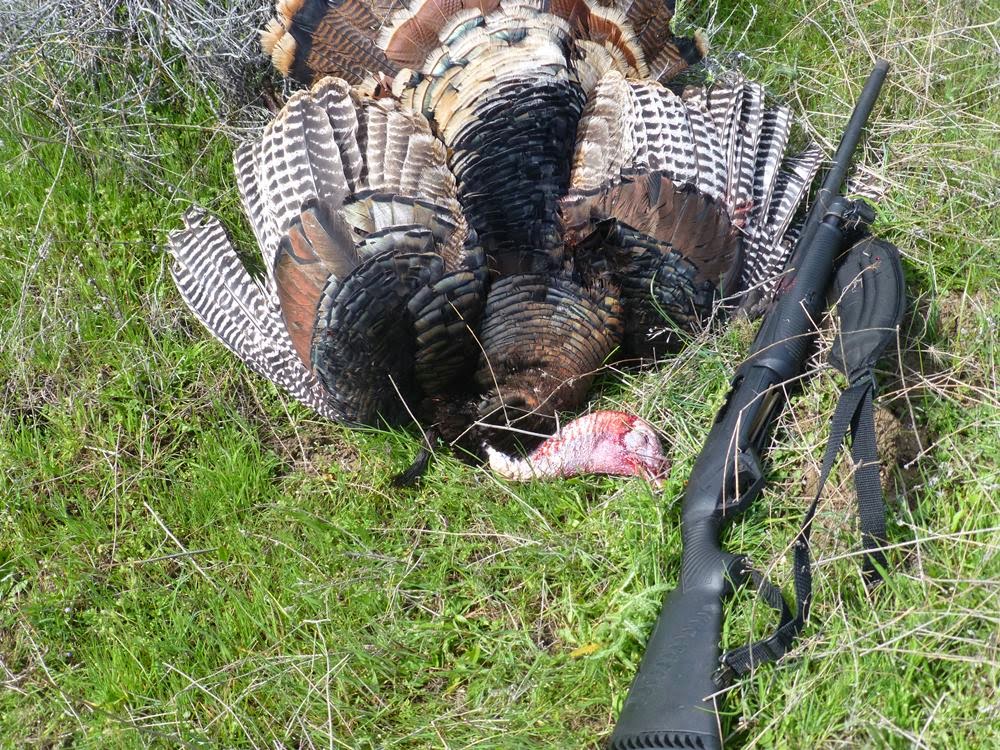 I have to admit to the excitement of calling a big Tom in. Hearing him gobble time and time again, sometimes getting closer and than getting farther again, is nerve racking. Trying to make the right decisions of moving or staying put is a challenge in itself. Move at the wrong time and you're busted. You finally know he's close enough by his spitting and drumming sounds, but still can't get a shot. It seems like forever that the bird has been within range but he never presents a shot. Your barrel moves ever so slow towards your target, because you know from past experience that any fast movement will alert the turkey and he'll be gone in a flash. At the shot, the bird goes down. You feel the rush of adrenaline rush back through your body as the bird flops around on the ground. It's almost hard to stand up to retrieve your bird because you've been sitting in this cramped position for so long, but you finally do and walk to your trophy. As you pick up the turkey and admire the trophy you appreciate the accomplishment of your success because of your past many failures.

Even at that, my mind had many flashbacks to chukar hunting. I located this turkey area while chukar hunting. It's 3 miles back into this area and seems straight up most of the way. In fact, while walking in I had the crap scared out of me by a flushing chukar in the dark. His chukar cursing left me even shorter of breath than the hill had already done. As the light started gathering over the mountain I heard the first gobble and then several other birds gobbled back to him. Wow! Here we go. I found a likely ambush spot and set with my back up against the tallest sage I could find and began my calling. Suddenly I heard a sound that seemed to drown out the turkeys gobble. Chuk, Chuk, Chuk, Chuk, Chukar. It couldn't be more than 50 yards away with another one calling from the other side of the draw. My mind suddenly went to thinking "hey there's some breeders for the coming season."  I started visualizing Tucker, Dakota, Riley and Jake running these mountains as they all have many times before. I could see each of them locked on birds. I even wished for just one moment I could have all four honoring each other on this magnificent mountain.

After the hunt was over, I was even more excited to bump three pair of chukar on the way back to my truck. I'm not often in chukar country without a dog and once again my mind wandered to the many points of previous canine friends. As I traversed down the hill, I noticed the green grass and many colors of flowers surrounding me on the hill. The spring is a beautiful time of the year, but I have to admit to yearning for fall season when this same mountain looks dry and full of chukars. 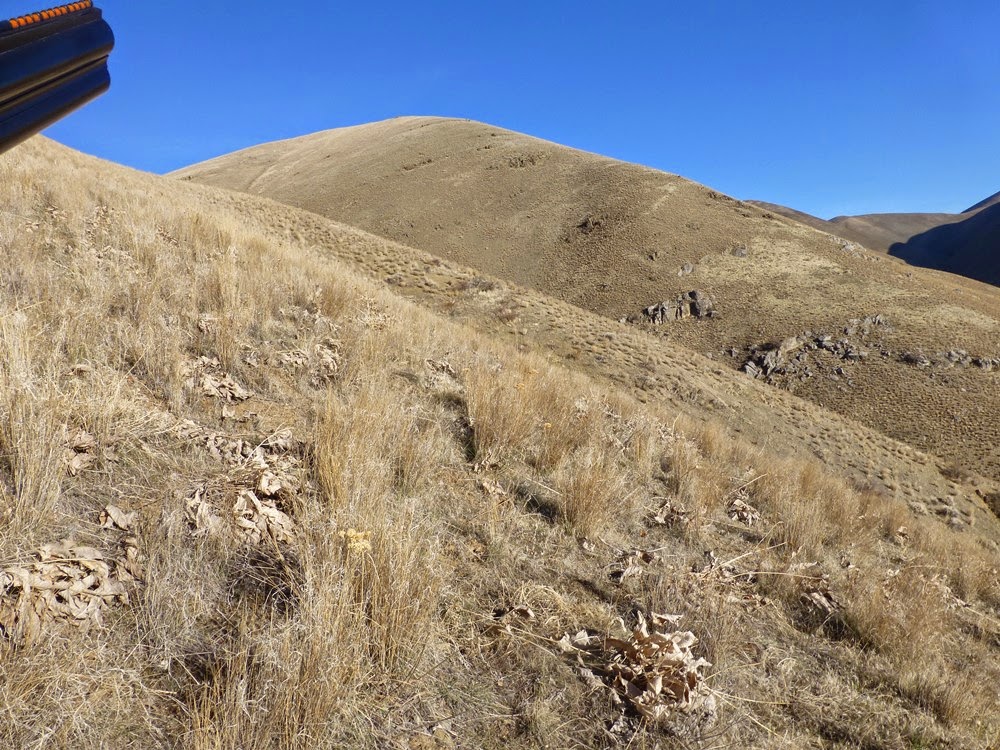 That is where my true heart belongs. I'll never forget any trip onto the mountain whether spring or fall, but my heart has a urge to be there with my dogs and other companions while the chukars are singing their song and throwing out scents that thrill my dog. With that scent, Jake will be thrilling me with the many points I hope to see in the future. Points that thrill me in the same way that the monarch bull elk use to. 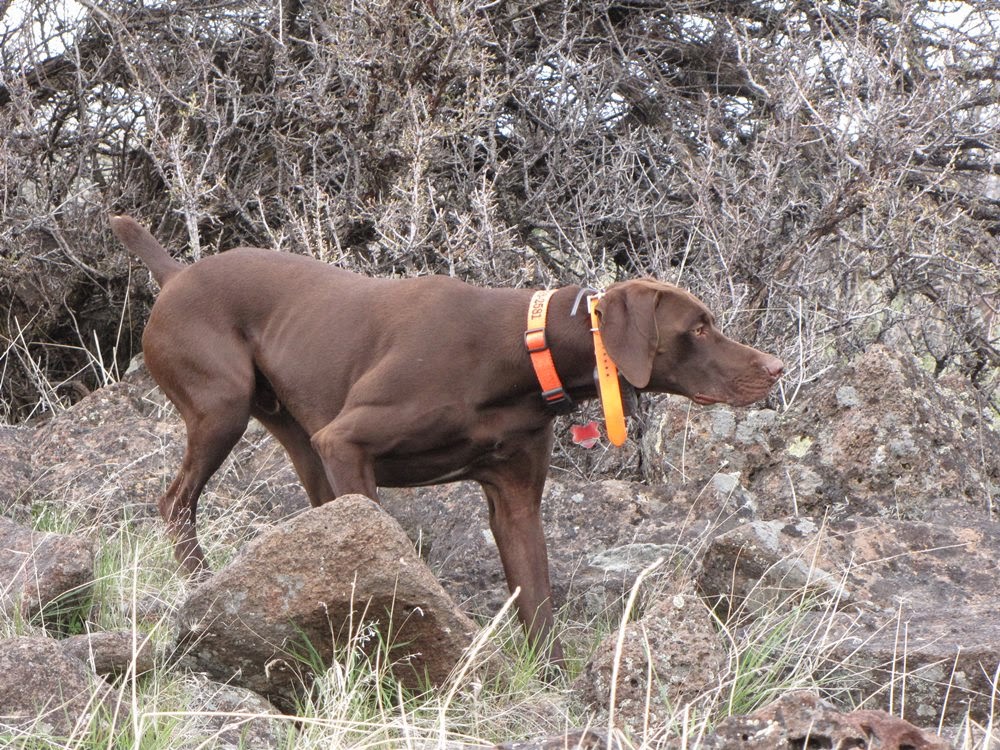 Oh, did I mention I got a turkey?
Posted by larry szurgot at 4:46 PM 2 comments:

Well it's that beautiful time of the year again. Everything is changing colors and the temperatures are perfect for being outdoors. But there are still things out there that make the spring transition a little uncomfortable for dog owners. One of those things are ticks. I pulled two off Jake yesterday after our great outing the day before. Over the years I have gotten used to pulling ticks off my boys and treat them with bio spot during the tick season to repel most ticks and kill the ones that dig in for a mouth full. It's still is something I'd rather do without.

The second thing is snakes. Yes, they're coming out of their dens and warming up for their long journeys. They are a little slow yet but still not fun to see. 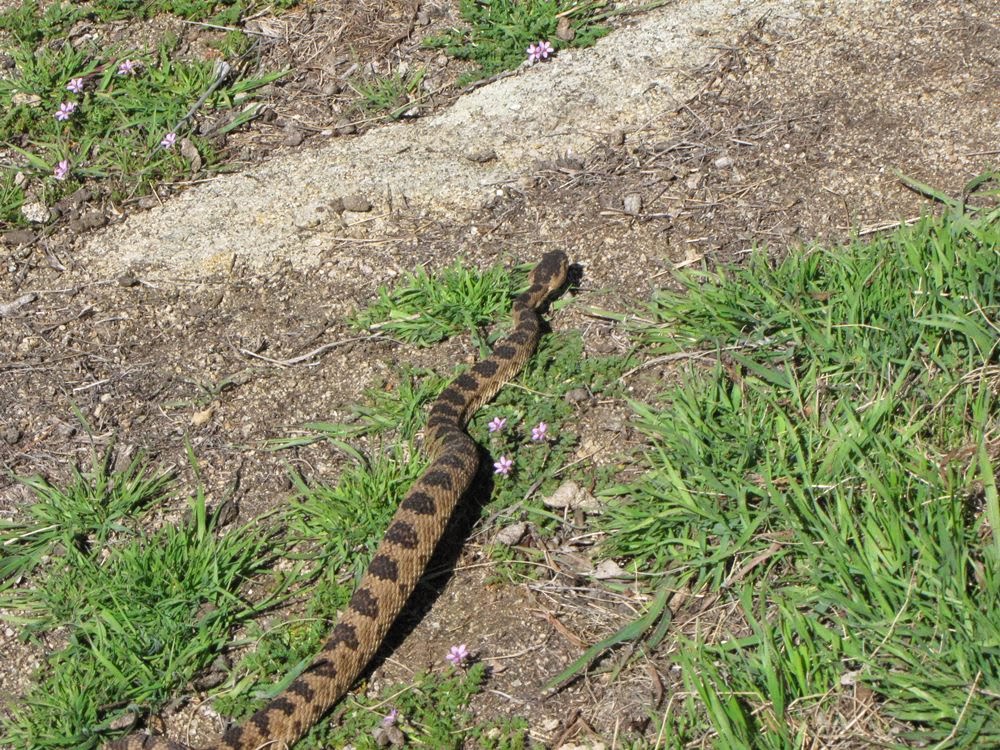 Snakes are another nasty thing that I have gotten used to over the years but could do without when it comes to my pups. Hopefully I'll find a bull snake in the next two months and make sure that Jake's snake training took last June but if I don't find a cooperative one we'll be back at the snake avoidance to make sure Jake understands what the business end of a rattler can do. 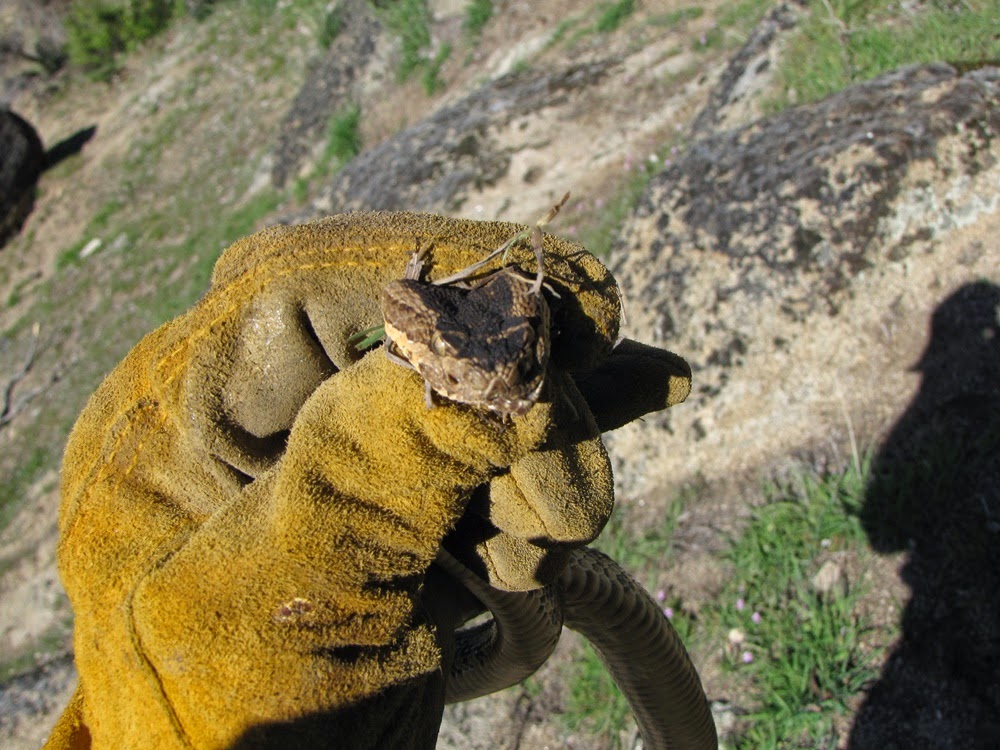 Meanwhile Jake and I will continue to be on the hill doing what we love and hoping to avoid ticks and snakes.

Since Barb isn't editing this I'll sneak in a picture of a few days ago. Here's Jake telling me to turn around. 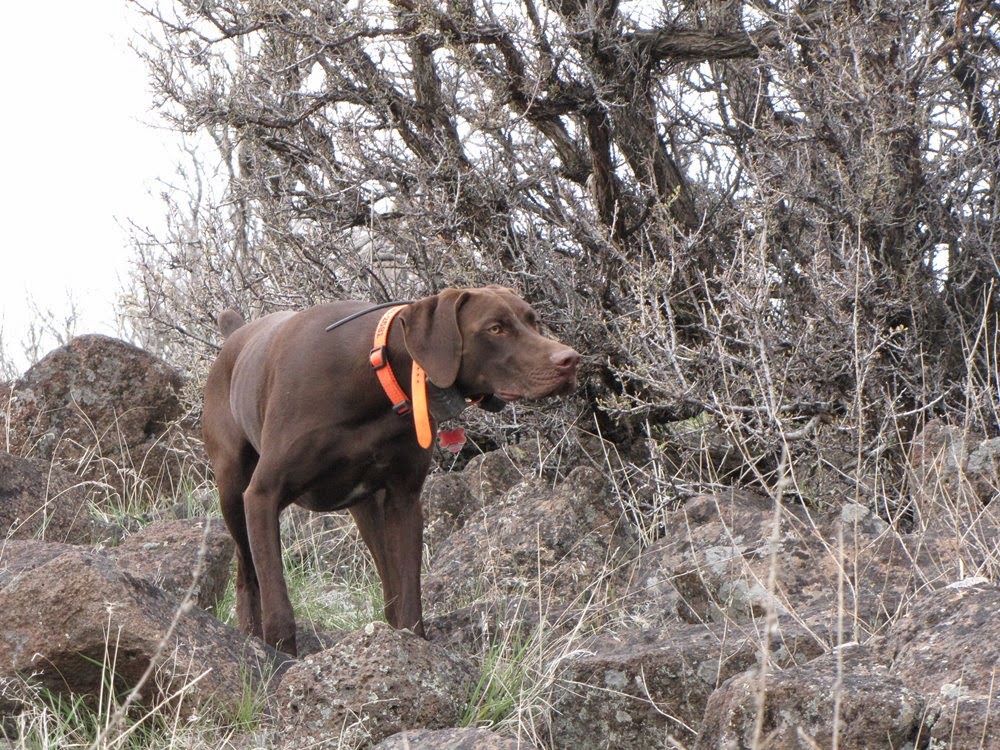 Here's what he was pointing. 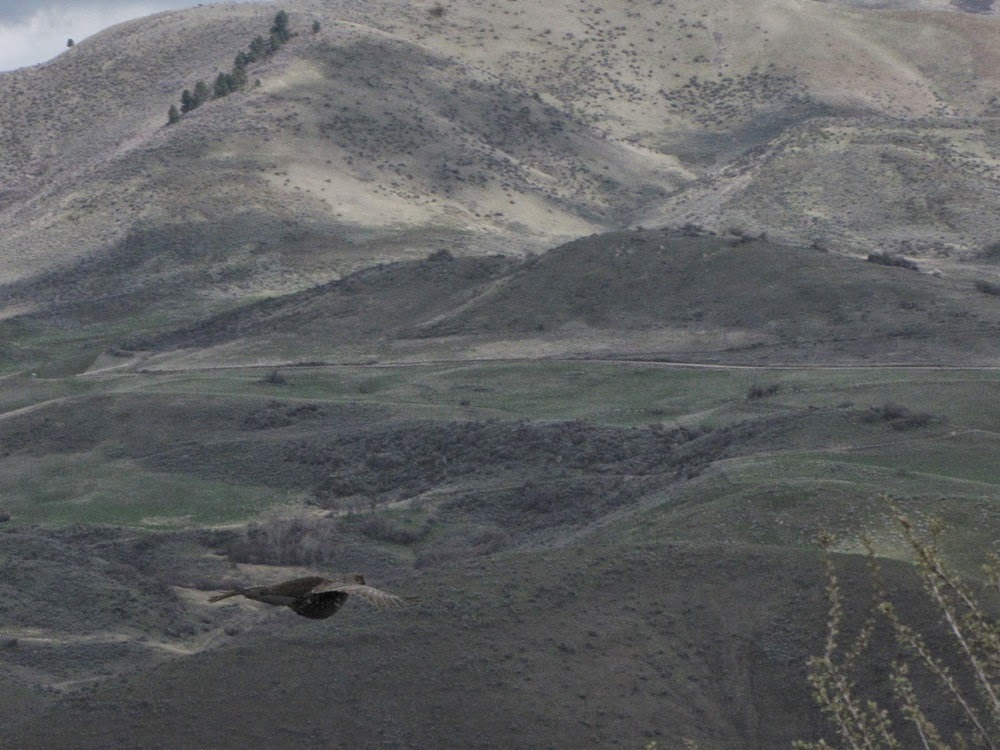