Keep sending them in.

Quinn Inwards new pup, Joker has already got it figured. 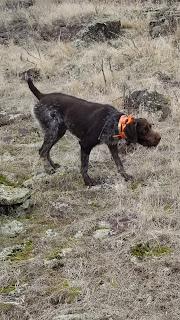 Posted by Tuckers Chukars at 1:51 PM No comments:

Well the Idaho season has come to an end. We hit the hill as hard as possible the last three days and although we were successful in many ways, the last day painted a picture of what the future for me and the mountain is likely to look like. It wasn't pretty and although the pictures I took are the greatest parts of my hunts, they don't show the old man behind the camera. I hoped I would never get old ,but this year made me realize those dreams would not continue.

The first couple of days were on hills a little more negotiable than the third, but still put quite a hurt on the body. No falls or anything like that, just sore back and other muscles. I saved the last day for the bad stuff knowing where Greg and I would finish the season. Day one we had a darn good day and packed quite a good day on my back  to the truck. 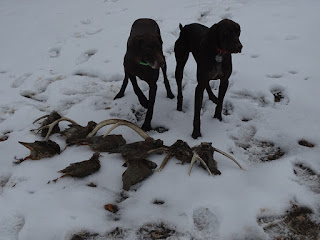 It was warm and the snow was departing the mountain quite rapidly and we were lucky to beat the bad slides home. 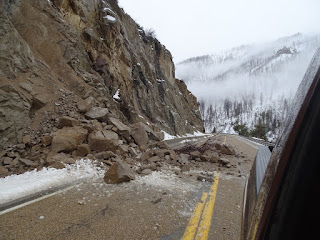 We heard later that the road had been closed for a couple of hours that evening. The next day we hiked high above the fog and found a fair number of birds that wanted to tease us and we got some good entertainment, but it wasn't without some struggling. Not for the dogs but for me. My lungs and back said to make it a short one but we still gained about 1500 feet in elevation. 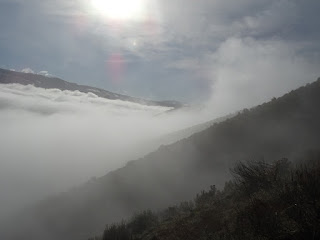 We got some great points and once in a while I even made a good shot ,but we cut the day shorter than usual. I always love taking point and honor shots with the camera. 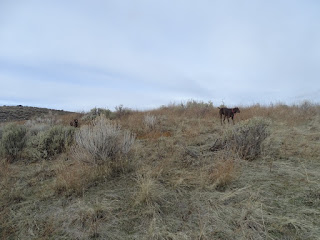 Three days in a row are getting too much for Jake, even though he just turned 7.And  I knew he would be staying home the next day so I was concentrating more on his points as we headed back down the hill. He didn't disappoint me at all and finished the day with some fine action. The number of birds I've shot over him in the last 7 years is amazing. 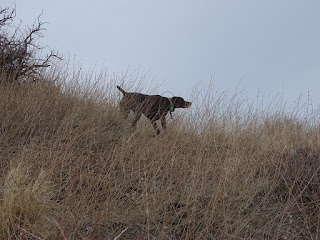 Now to the killer. Day three. As I said. I knew where we were headed and I also knew how steep it was so I saved Jake the misery by leaving him at home with Barb. It was hard leaving my buddy behind, but I knew it was best. Greg Allen and I have hunted this spot for over 25 years and this was our first trip to this steep mountain this year. I mentally was prepared, so I thought. Here's a short video of Greg and his three girls Trudy, Katie and the pup Elsa. I headed up the slope early to video the excitement of the girls ready to go. Greg and I have been doing this together for over 30 years and he and his girls are the best hunting companions a guy could ever want.

Don't let the video fool you. This mountain is as steep a mountain as you can hunt. There is never a flat spot to sink your feet into. Even the ridges and draws are too steep to go straight up. Most places you can at least find a deer trail to follow, but not this mountain. You just side hill around and up the mountain until one ankle gets sore and than do a 180 until you get to the elevation you want to hunt. Greg always heads up the road about a half a mile and then hits the slopes to put some distance between us. I always know where he is from the distant shots or the covey of chukars flying high above me around the hill. Grady had no problem traversing the side hills, but even his points 150 yards away and usually up hill or down seemed to take me forever to get to. 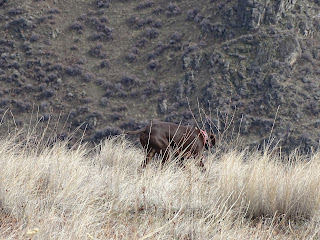 Once again, don't let the picture fool you. The hill I am on is as steep as the opposite hill. In fact it is a continuation of the hill we are side hilling.  It just continues and the birds love it. I'd have to say I had at least 15 solid points on the day and most of half of them I just couldn't get to. Gaining the elevation was just kicking my butt. 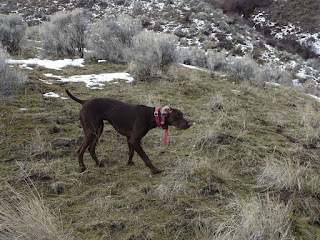 When I would get to the point and shoot well the bird would always fall at least 100 yards down the hill making for hard and tiring retrieves. Once again this video shows the lst half a Grady's retrieve and the video does the steepness no justice.

Have I mentioned that the mountain was always steep. This long off shot of Grady is pretty much the same elevation as I was, but due to the steepness it still took me several minutes to get to his point 190 yards away and then not get a shot because the birds were down hill and to quick for me to get a shot. 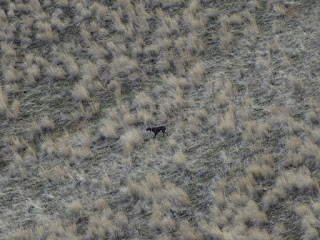 I took one passing shot that day and I ended up rolling side hill two or three times because of the steepness. I'd probably still be rolling if I had fallen down hill instead of  the way I did. I have to say seeing the number of birds I did kept both Grady and I excited but my body just decided to quit on me. Grady had find after find and I got some good photos and made a few nice shots afterwords but the work only began for Grady at the shot. The retrieves were long. 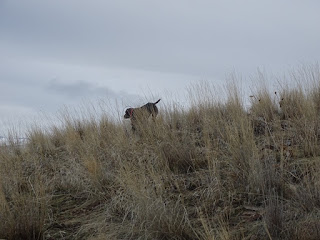 As I look at these pictures I think was it really that bad or was I imagining it being steep. Did I mention how steep it was. This was my favorite point of the day and after the photo I made a crippling shot on a bird that fluttered down the hill out of sight. 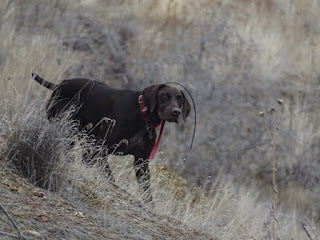 Grady went down for the retrieve but had no idea the bird went as far as it did, so I had to head down the slope to what seemed forever until Grady found the bird and retrieved it to me. I looked back up at the elevation we had lost and decided there was no way I could get back up there and decided to stay at the current elevation. Grady's last point was shortly after that with the same results but this time the bird made it almost down to the road. Grady had no idea I had hit it and I knew I had to go down and help him find the bird. We did find the bird but I was spent for the day. We walked the final mile on the road with chukars calling us from above. In years past there is no way that I wouldn't have taken their challenging calls unless I had already limited out but this day was different. The will to continue was gone. It was almost not fun. Back at the truck we met Greg and took some photo's of his take. 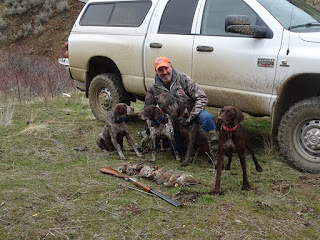 Of course Grady had to get in the picture. In the past I would have considered this a great hunt but by now I was sore enough I was thinking of my bed back home. We drove the hour and a half back to Payette where Greg dropped me off  at my truck and continued my hour drive home. I stopped 6 times just to stretch and by the time I got home Barb had to help me bring the gear in while I soaked in the tub.
If this post sounds like the whimpering of a whipped pup, it is. I'm apologizing for the future. Hopefully I'll be still posting, but it will probably be less success stories. I'm going to find more huntable areas for me and the boys and I know that means fewer birds. But you'll never hear me say it's not like it use to be because I know they are up there waiting for someone else who loves chasing chukars as much as me to come and challenge them.
I hope someone else comes along and starts a post about chukar hunting. Someone who has the energy to chase the birds in their natural habitat and understands the ups and downs of chukar hunting. Someone who understands that there will always be good bird number years as well as bad. Someone who knows that there is little interference by humans to affect those us and downs. Limit changing and season changing will not change what has worked for the last fifty years. Keeping public lands public will be the biggest challenge to keeping great chukar hunting. There are plenty of people out there to complain about those things as well as the tools and ways that others hunt. We need an ambassador for chukar hunting and the great dogs we follow and great birds we pursue.

Now, for my feelings about the 2019-2020 chukar season. For me it was above average. It started out with seeing a lot of young birds later in the season than usual so my early season found fewer shot birds but it picked up as the season progressed. We didn't have any rough weather conditions so accessibility wasn't much of an issue. Hunting pressure was minimal. The biggest plus for me was my shooting percentage. For the first time I was in the 70% range. 73% to be more exact. I think that was because I'm much slower now and am usually only getting one shot off so I'm taking more time.

One more thing. My rants for the year. Once again there is the talk about seasons and limits. Some want to move the limit back to 6 birds. Why? How many times do you shoot eight birds and what will it accomplish? It won't affect the bird numbers at all but might make some feel better because they got a limit. Most people know golf. That is like saying let's make the hole 4 inches bigger and make 80 par instead of 72. As far as the seasons, the game management has done a great job in finding what works best. The early season works for some and the late season for others. Accept it and move on. Some don't like the heat and some don't like the muddy roads in January. I wouldn't chukar hunt without a dog but I see no fault in those that drive a road until they see a covey bust and than chase them down. What makes their way of hunting any different than mine. This year I heard the rant of hunters riding in their four wheelers while their dogs ran and than would get off and shoot birds when the dogs would point. Not my style but do you really think they get more birds than the walking hunter? As long as what they are doing is legal put it out of your mind and enjoy your hunt the way you should.

Good luck to all in the future and I hope I'll hear from you soon.