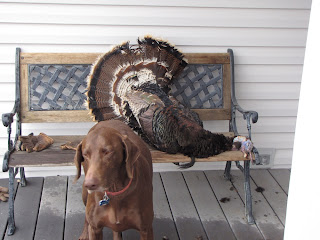 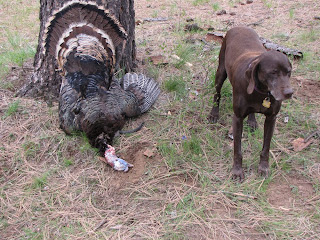 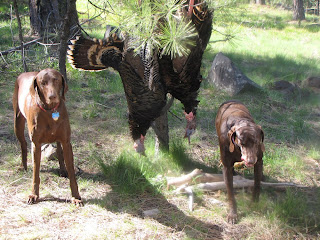 Although I was through hunting I decided to stay one more day and check another area out. So once again the dogs and I traveled to another area and took a scouting hike. We found plenty of sign and once again Riley flushed a couple of turkeys so I thought I'd give it an early morning try with a camera. Once again the birds were silent first light. I did have a pack of bear dogs give me some excitement. They were obviously on a bear and I could tell they were traveling the same trail I had used to get in there. I got up against a tree not knowing how the dogs would react to me. I knew the bear would run, but wasn't sure about the dogs. Luckily they turned before they got to me.
The dogs did elicit a shock gobble which I honed in on. After calling the bird pitched off the hill above me and landed in a draw 50 yards below me. Once again I set up with an old logging road between us. When the bird hit the road I moved to turn on the camera and the bird caught the motion and was gone in an instant.
One more turkey year in the books and time to prepare for the baby season and picture taking.
Posted by larry szurgot at 3:59 PM 3 comments: