Where did I go wrong

Imagine this scenerio. You have ten days left in the season and your wife goes on a cruise, leaving you and your dog to chase chukars at your leisure. Well, that's exactly the position I am in. Barb, her mother and our daughter our baking in the sun somewhere while Riley, Dakota and I hold down the fort. Sounds like the perfect deal, and it was, for Barb but not for me. The day after they left, my son in law, two grandsons and I took a ride to a favorite hunting area on a scouting trip. Although being a little saddened by the harshness of mother nature we found some great burned off slopes for me to hunt the next day. 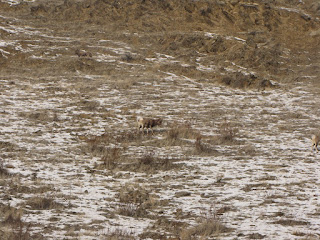 So, Tuesday finds Riley and on our return trip to chase chukars. The sun was shining even though the temperature showed -2 degrees. Usually that's not that bad, because the snow helps reflect the sun, and that coupled with hiking up the slopes, keeps a person warm. But, not so much when there is a twenty mile an hour wind contributing to the cold. I don't have a clue what the wind chill factor was, but for a while I thought my cheeks were going to be frost bitten. Although we were succesful in getting some chukars, I questioned my sanity on being on that cold mountain slipping and sliding on the frozen ground when I could have been home by the fire. Then Riley would be on point again. Somehow that makes it worth while. Wednesday's weather called for pretty much the same conditions and since Riley was favoring his right leg again and I had a few bruises of my own from the mountain, I decided to take a break and wait for the warmer weather coming Thursday. Thursday warmed up as they said, but with it came 1/4 inch of freezing rain. After pulling three cars out of the ditch on my way hunting in the first five miles I decided that maybe the hills would have to wait another day. Another day came again today, and we have been met with the same conditions. I can't even get out of my drive way safely. So Riley and I are sitting here hoping that Barb is having a great time on the beach she is now sitting on and wishing we were chasing chukars on the hill instead of watching quail in the front yard feeding. 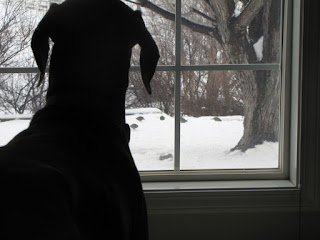 Cold day on the mountain

The season end is drawing near so I figured Riley and I better quit pouting about this miserable weather and just do it. Even though it was 4 degrees when we started the hunt and 11 degrees when we got back to the truck it was quite comfortable without any wind. The footing on the frozen steep hills kept me at a slow pace but I eventually got to where we wanted to be. I decided to take my camera because I've seen cougars in this area several times in past winters. Although I didn't find a cat, Riley provided plenty of entertainment, so I snapped some shots of him. Being this will be the last time out with a camera I decided to do a little photo essay of our hunt. The country going in. 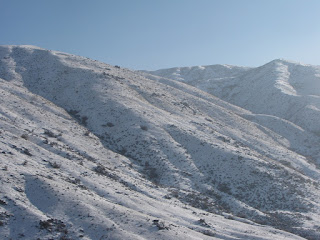 It took about an hour to get across this draw and get to the area we like to hunt. 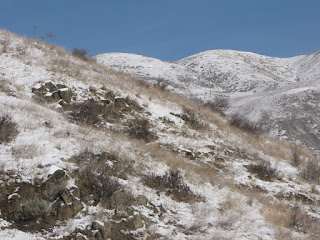 From here on it's hunting time. 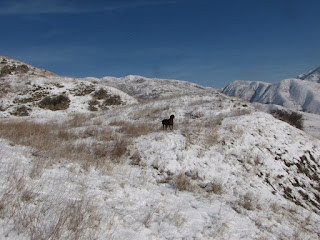 I'm coming as fast as I can. 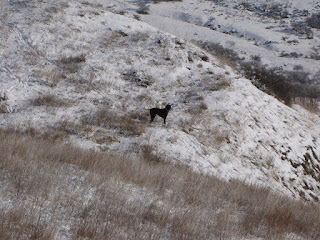 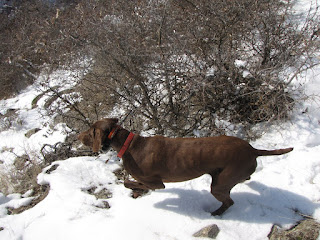 Boy Larry, you better get these. 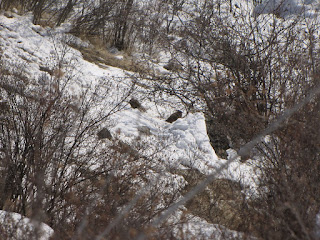 Okay Riley, now I see them. 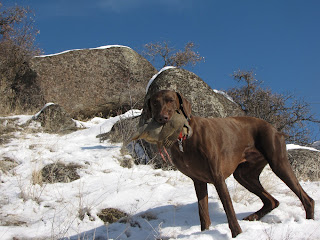 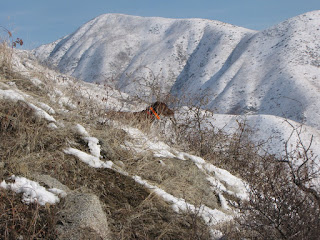 A few more points to get to. 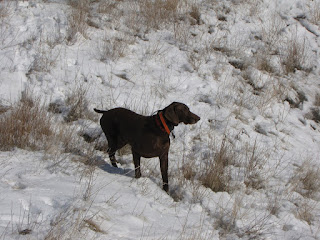 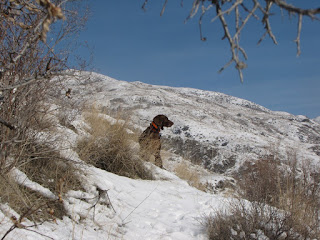 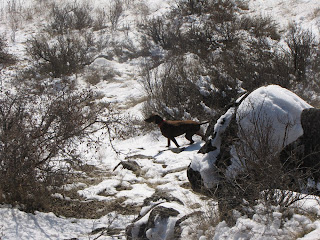 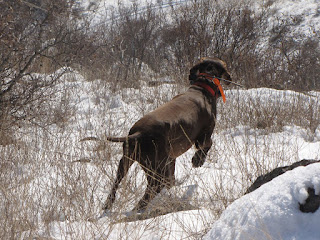 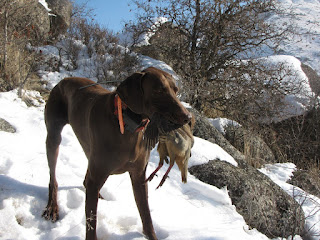 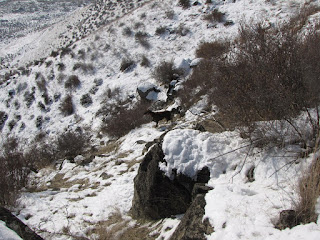 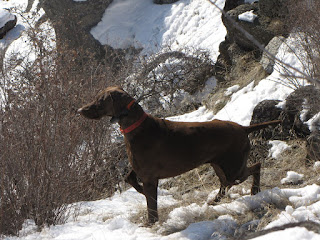 Riley Started favoring his right leg on this pooint and retrieve. 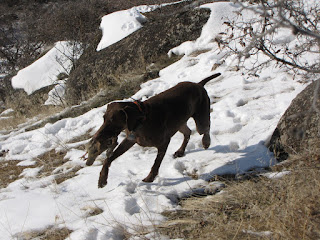 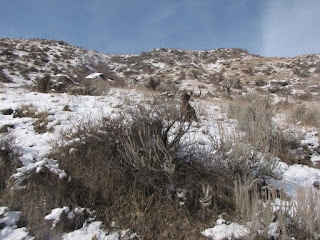 There was a chukar that held in this brush until I almost stepped on it. 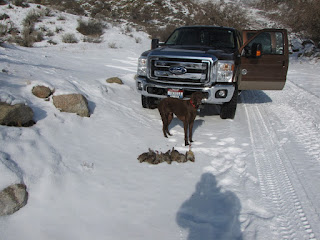 Two days ago, Riley and I were hunting southern slopes in the Owyhees. We were chasing chukar on the windy burnt off slopes and enjoying some pretty good bird action. Yesterday we decided to do the same, only a little closer to home. The hills were white with a new blanket of snow. Maybe two inches of powder, so the walking shouldn't have been too bad. About a half hour into the hunt the snow started falling again. It fell and fell until I finally had to convince Riley that the hunting was not fun any more. The snow was now about 6 inches deep and hidng all kind of obstacles that lurked just waiting to trip me. Luckily, I have learned a tuck and roll technique to help protect my gun. The freezing snow down the back is a little uncomfortable but my gun is still in one piece. The difference between the two days was amazing. Two days ago, although some of the birds got a wild, I could move around and get to Riley's points. Yesterday, although starting out fine, ended up showing me how man and having only two legs on the ground is not adapted well for the harsh environments that can be encountered on steep mountain slopes. Riley had several real nice points, but I simply could not get up the hill to him. Even though I could see birds running up hill in front of Riley, I knew there would be a few that were hiding under the snow and brush. Twice I got to him and sure enough he had convinced some birds to stay. But that was all I could muster. My legs were aching and my elbow throbbed from a meeting it had with the frozen ground. How can those stubby legged little chukars move through six inches of snow up hill so easily when I have such a tough time and it's just over my ankles? Anyhow, at Riley's reluctance, I was happy with three birds and headed off the hill. By the time this storm had passed, we had 7 inches of new snow on top of the existing 2. So, this morning, Riley, Dakota and I are sitting by the fire hoping the sun will come out soon and melt some of the southern slopes enough to make the footing safe for this two legged hunter to pursue his passion. Of course, my mind wanders to the past as well as to the future. I am reminded of all my great hunting companions of the past and the great feats they performed for me on the hills. They were each different in hunting potential as well as personalities. Each one warmed my heart but also took a piece of it away with their departure. Earlier this year on a hunting trip with Riley, I had convinced myself that he would probably be my last hunting dog. Being retired now, I have spent more time with him than any dog in the past. We have become best of friends and spend most of the day together. He, like Dakota has consumed a big part of my heart and will be taking that with them when they pass away. I didn't think I had any room left in my heart for another dog. But, sitting here with the boys, licking my wounds from yesterday, I have come to a understanding of me. I wake up each morning and I wonder what me and the dogs are going to do today. Yes, I have family and we do lot's together, but our interests are different and we all pursue our passions and we understand that about each other. Mine is my dogs and chukar hunting. So, as I look at Riley and worry about the big void he is going to leave in my heart when he is gone I have also realized the void he is going to leave in my life and what is going to happen to me if I don't fill that void. My dogs have always helped to keep me active. As long as I have a dog I feel it as my responsibility to keep him entertained and exercised. We do that by hitting the mountain. I'm not a gym person anymore. Even though I'm old enough to collect social security, I'm not ready to succumb to the couch. I have many more good years in these legs. So, as much as I love Riley, I have decided on one more pup. One that will help me stay in shape well into my mid seventies. I'll worry about beyond that when I get there. It's hard to imagine not hunting with Riley just as it was with Tucker and Dakota but I'm sure if Riley was able to tell me, he would want me to keep going on the same as I would want him to continue hunting even if something ever happened to me. Hopefully, in about 7 weeks I'll be talking about the new addition to the Tuckota team. Meanwhile, with twenty more days left in the season, we'll hope the snow melts some so Riley can take advantage of the days left while Dakota takes advantage of the couch on the cold days. After that, Riley and I will spend February on the hill working on some of the bad habits we have formed over the past hunting season and Dakota will just get some exercise. Then, all hell is going to break loose as we all start the bonding process with our new addition and Riley figures out how he's going to train the new fireball. I guess when I pass a dog will always be included in the way they define my existence.
Posted by larry szurgot at 5:03 PM 2 comments: