The eyes have it

I went for a conditioning hike with Riley yesterday. We had to go to the high country to try and find some cooler areas. The area had plenty of old logging roads and game trails but once you got off of them it was very thick. I was very happy to see Riley's range shorten so much due to the thick country. Even with the shorter range I was glad I had my astro and a beeper collar on Riley. The collar said he was on point at 23 yards but I couldn't locate him. I got closer by pushing the locate beep and finally saw him on point in the thick cover. As I approached a grouse flushed but Riley remained motionless. I made as much noise as possible trying to flush another bird with no luck. No matter what I did Riley would not break point or come to me. I finally decided to beat through the brush and get him. I got about three yards away and noticed his eyes fixed on something. I looked for a couple of minutes and decided he must be still pointing the bird that had already flushed. No coaxing would get Riley to move so I reached out to grab him by the collar. As I did a rough grouse flushed right next to my right hand. Scared the crap out of me and Riley was off to find another. 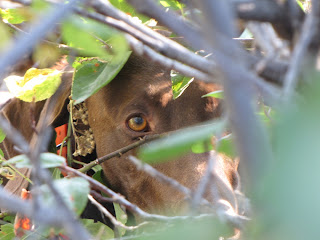 Just wone word. TRUST
Posted by larry szurgot at 9:57 AM No comments:

Probably the people that need this advice the most won't be reading this post. They are the people about my age and aren't to savvy about the computer and blogs. All the same I'll try and help those who are getting closer to the middle age.

It seems every time I have started up the hill training dogs or scouting chukar this summer it's been real hard motivating myself. I get started and within a short time I'm thinking maybe I'll make it a short one today. My hips are sore, breathing is labored and in general I feel pooped. But, because of the dogs I push on because I know they need a little more exercise.

What I have found is that every year it seems harder to get started but once the body gets lubed the hills seem a little flatter. Maybe the veins don't transport the oxygen to the muscles as fast as it used to or the heart isn't quite as strong as when I was forty but it seems like the oxygen finally gets distributed through the body and the next ridge doesn't seem quite so far.

Today I started up the hill very early. There were some clouds in the sky as the sun came up which helped the temperature some. I also try to walk the shaded side of the draws when possible to help the dogs. As I mentioned, about a half hour into the trip I was feeling bushed. I decided to get to the top of the first ridge and than decide how long of a trip I wanted to take. Ten minutes later I was there and that burning sensation in my lungs and legs was gone. I looked the country over and made my plans for the rest of our excursion. It was just a matter of pushing myself over the hump.

In my athletic days they used to call it "getting your second wind" or "pushing yourself over the hump". Today I call it just pushing yourself for the pleasure of getting there because of all the great experiences you have had in the past. Most pleasures in life are usually gained through some type of effort and chukar hunting is no different. As you gain a little age it sometimes becomes a great feeling just to push yourself over one more mountain, but that can't be done without getting over the first hump which seems to be the toughest one for me. 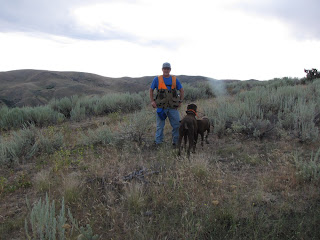 When I train or hike I always go with my hunting garb minus the gun. This way I keep reminding myself of what I need to put in which pouch making it more convenient for both me and the dogs.

Today I hiked to the top of this first ridge before I got the good blood running through my body. I picked the farthest knob on the left of this picture as my destination figuring it would produce several coveys of huns and chukars to work the dogs on. 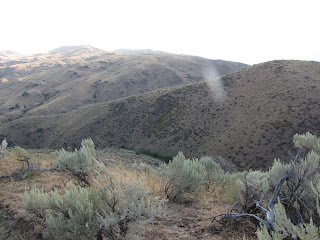 I was a little disappointed in the birds although I saw lots of tracks and dust bowls on the dusty trails But the dog activity helped to keep the blood pumping in anticipation. On the whole trip I only had seven points and honors and three of them were unproductive but the excitement was still there as I walked out in front of the pointing dogs. 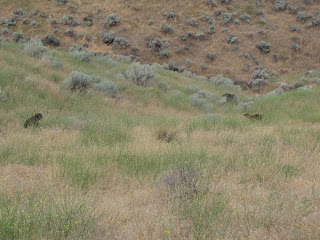 I am retired now so I have a lot more time to hike the hills. I go at least twice a week not only because I enjoy it but because I know that if I don't it will be harder to get started  again once I slow down. I had a knee replacement five years ago and a few other mishaps that have held me up for a few weeks and each time I felt like I had a gorilla on my back for a month. The conditioning came back but it's a lot easier if you don't let it go. So you guys over 60 keep pushing yourselves and lets not let all the 30 and 40 years old guys have all the fun.
Posted by larry szurgot at 5:56 PM 5 comments:

Posted by larry szurgot at 7:05 PM No comments: