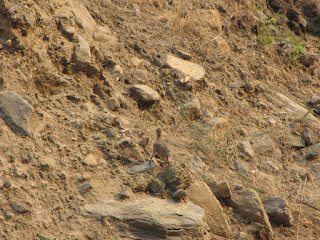 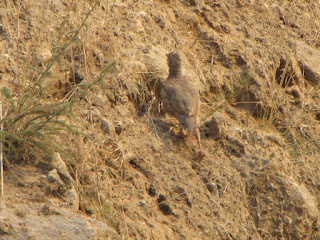 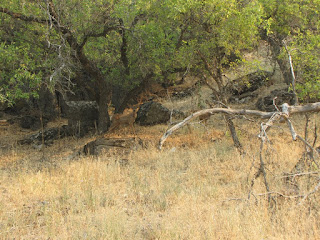 Jake and I made our final scouting trip yesterday and were real excited with what we found. We went to a place we had been to earlier and had been a little disappointed with our findings but once again found how one trip to an area means nothing.

Although scenting conditions were poor at the best, Jake managed to bump several different covey of chukar. The difference in ages of the chicks ranged from fully grown to only three weeks old or less. One covey of large chukars was approximately 40 birds indicating several groups already gathering while one late hatch numbered at least 15 babies with the two adults. I didn't see one hun but that is pretty typical. They just seem to show up sometime during the hunting season. They must nest in different areas and eventually migrate into the chukar habitat.

We have another hot spell coming next week and if we can make it through this one without any more major fires I think we'll be looking pretty good. The numbers won't be like 2005 but a lot better than the last two years. My predictions are those guys that don't give up early will be finding enough birds to keep the day exciting and possibly bring home a limit. There are still lot's of places with no birds that can make it pretty discouraging but when you find them it will be worth the trip.

I won't be scouting any more this season and Jake and I are preparing for the season. In ten days the grouse season opens and we are hoping to get some warm up trips after them before the chukar season opens on the 19th of September. Maybe due to the heat, Jake and I have been fortunate and not seen any snakes in the past month but know they will be showing up again for the next month and a half as they head back to their dens. I hope everyone has taken their dog's through some sort of snake avoidance class. Also, the cheat is high and thick in places. It's perfect ear high if you're a dog and plan on a trip to the vet if you go out before a heavy rain and wind to knock the cheat down.

I hope everyone has as good a season as I plan on having. Be safe out there and get your dog out as much as possible. I'm sure he/she will show you a great time if you give them a chance. Good luck and happy hunting.
Posted by larry szurgot at 8:00 AM 2 comments:

These are the notes for today in my hunting log.

Found more chukar today. Saw at least four different covey's. Three of the covey's were six or more weeks old. Largest covey had 8 chicks. One covey had over a dozen two week old birds that flew maybe thirty yards into the heavy brush behind ma and pa. They flew off this rock out cropping. 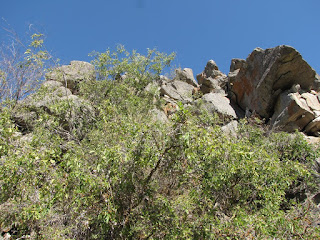 Two separate single chukars were jumped. I'm hoping those were males who were leaving their partner on a nest of eggs yet to hatch. Usually, if they have little ones on the ground they give the injured wing trick to lure you away. Twice today I had doves fly to the ground and look injured to protect their nests.

So far only one of this doves eggs had hatched. 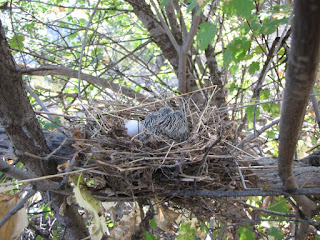 I saw one covey with at least 15 babies, but I'd guess they averaged about 8 per group. 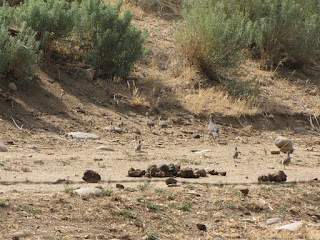 Our big entertainment came rescuing this range bull from a mud bog he was stuck in. 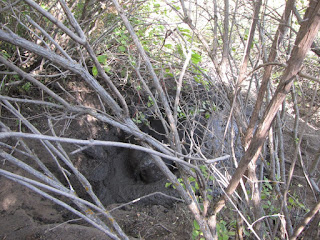 When Jake and I first found him I thought he was dead, but as I climbed down the hill to him he started snorting and blowing mud everywhere. My tough dog guarded my pack up on the hill while I got down in the bull's face and aggravated him. I got in the mud with him and slapped him in the face a couple of times and he finally got some footing with his front legs. I was careful not to to get my feet stuck next to an unhappy range bull and after he got his front legs under him I backed off and used a large branch to keep him excited. I learned something today. Bulls do not like getting their nose pulled on or getting sticks shoved in their nose. He got angry enough to finally free himself and wearily walked into the heavy brush to rest.

Jake kept guard from behind a bush.

I've had several people ask what the last picture is. That is the tail and back end of the bull in the picture. The rest of him is so deep in the muck it is hard to tell it's even a bull.