The baby season is upon us and if you have a dog that refrain's from chasing or flushing it's a great time to be out there meandering. It's a very fragile time, so if your dog won't whoa and whoa tight than maybe it's not the best time to be out there with your pup. Luckily for me, my boys have been very staunch and to my knowledge have never tried to catch a baby bird.

When Jake catches scent of a young bird his nose get's real close to the ground and I look within two feet of his nose and usually find a motionless bird hunkering down in the cover. Such as this baby grouse on May 23. 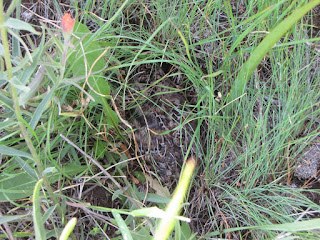 Here is one of Jake's points on a covey of little ones. 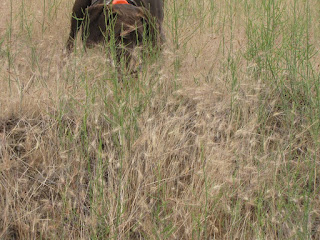 I can't see the birds in this picture but when I got above Jake I could see three little ones nestled in the cheat grass. As I bent down to snap a shot they flushed. 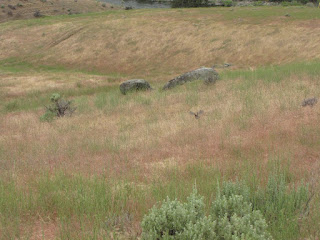 Simultaneously another dozen or so busted about ten feet below us along with mom and dad. I managed to snap a shot at another of the little ones which I would guess were about three weeks old. Surprisingly they flew over 100 yards away. 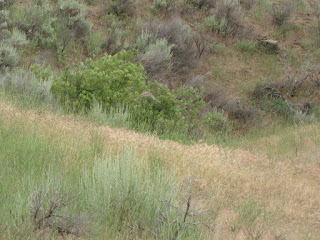 These were the first chukar babies of the year but we've seen plenty of sign of more hatches to come. There are also plenty of other babies to enjoy on the mountain. These dove egg's were conveniently placed at eye level along one of the trails Jake and I search for chukars from. 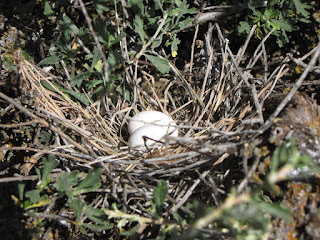 We haven't found any fawn's yet but know they are out there but I about stumbled on this calf elk laying on the trail I was traveling. 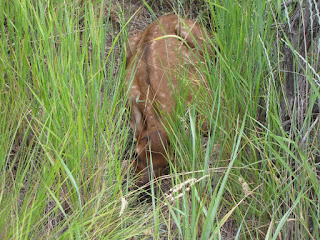 Jake came within 5 yards of the calf and never even knew it was there but later my Astro said Jake was on point and I found him watching over this little one. 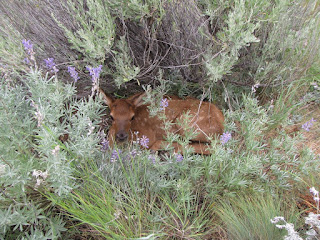 He waited patiently while I snapped pictures as did the calf. 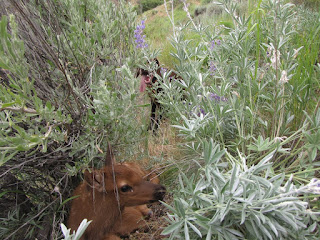 One final peek a boo shot and Jake and I headed off the mountain. 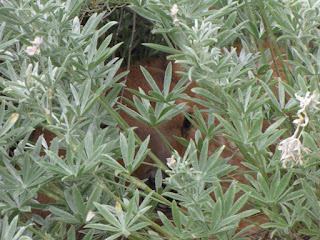 Although, as I mentioned, I haven't seen any other young chukars I think the summer is progressing rather well and September 17th can't come soon enough for Jake and I.