From other sites and text's I'm getting a mixed opinion on the chukar and hun populations in southwest Idaho. It's hard to say what the season is going to bring and rather than give a thumbs up or down I'll tell you what I found.

I'm going under the knife tomorrow so understand these hunts have been in good chukar country but not many miles (two at the most each time) and very little elevation gain or loss.

My first hunt was almost a bust. Both Jake and Grady were excited to be on a chukar mountain again and covered a lot of country and we saw one chukar that looked to be a mature bird. The hill was as dry as I can ever remember and I barely had enough water to keep the dogs hydrated and we were soon headed home.

Hunt two brought just a little moisture over the night and also lifted my spirits enough to hurry out in the morning for maybe some good points. By the time I got to my hunting location I could tell the moisture had missed this spot. But we went on anyhow. I was pleased shortly after we left Grady busted a dozen or so chukars and they all looked to be mature first year birds. They flew across the draw and although Grady wanted to pursue I knew I couldn't get down the canyon and back up so I encouraged him to stay with me and follow the trail around the dry ridge. Twice I saw coveys of chukar flying off below me and was quite sure Grady had busted them. By the time I covered about two miles and ended up back at the rig the dogs busted 6 covey of birds with the biggest covey being about 2 dozen. Although I got no points I did shoot two birds and they were this years birds and mature.

Hunt three took me to an old favorite. From the time we got out of the rig we were hearing birds. I even got out the bino's and watched several birds hopping from rock to rock high above. Although I knew I couldn't get to them I slowly headed that way for a game trail that rounded the ridge they were on. I was sure once we got on the trail the boys would at least bump a few birds from above but was shocked when the dogs went through the area and never even got excited. I knew there were birds there because I saw them but the dogs never picked up scent. As we rounded the ridge the birds were chattering like crazy and I could see them crow hopping up the hill. The dogs also heard them and were encouraged up the hill. Wow! by the time we concluded our hunt I saw at least 30 birds on the ground and never saw one take to the sky. Once again, it was very dry conditions.

Being I don't know how long I'll be down I promised the boys one more hunt even though it was going to be warm. I usually try not to hunt the same spot twice in a month but decided because of the ease of walking I'd return to the scene of day ones hunt. The dogs were treated to some excitement seeing two covey from the road on the way in and were more than ready to get the collars on and start the hunt. We parked in the same old spot and it wasn't five minutes before a large covey of chukars flew around the ridge and landed not 100 yards away. We headed that way and the dogs got a little birdie but didn't really act that excited and worked their way up the draw. As I walked through the area I saw the birds land I was surprised as they flushed. The dogs never even smelled them. They weren't on the ground long enough to leave much scent I guess and these birds were from a later hatch so I left them for a later date. Soon after that one of the dogs busted a half dozen more chukars that dove down the draw. I stayed at about the same elevation letting the dogs work the area. I watched as they got birdie but they never gave me a point. By the time they got a snoot full they were right on top of the birds and they flushed. This happened several times before we got back to the truck. I ended up shooting three birds that were flushed and these birds also were first year mature birds.

So there you go. Take it from as to what the season is going to look like. The place I went to on the first and fourth hunt produced one bird the first time and at least 50 the fourth. Under good conditions who knows how many birds we might have seen. Even though it wasn't as much fun for me to watch the boys slamming on point they still had a great time being out there searching. They even got to get some feathers in their mouths.

The weather has made it tough out there and it's a hit or miss time of the year. My nose got plugged up on today's hike so I can imagine how much pollen and dust the boys sucked in trying to find those birds. One other observation that might be of some importance was the quail on the way out. We saw several covey of quail on the road and every covey was huddled up in the shade of trees. Evidently birds don't care for heat either and possibly don't cover as much ground this time of the year thus not leaving as much scent. Just a thought to why some people aren't seeing as many birds.

Anyhow, I'm looking forwards to some wet weather and cooler temperatures and hoping in about two weeks to be on the mountain again. I believe the birds are out there just waiting to make me look like a fool again and I'm just waiting to oblige them so you guys save a few for me. 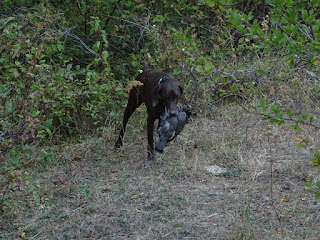 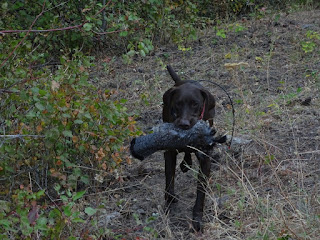 Posted by Tuckers Chukars at 8:57 AM 3 comments:

Just found out today about a fire burning on the Cecil Andrus access property. It's something that some of you from out of state might take a look at. Especially if that's one of your go to locations.

It started two days ago just before we got some heavy winds. It quickly blew into 28,000 acres. For the most part it's burning north and east of the road leading to Woodhead but has already burned some prime upland bird habitat. I've just seen a preliminary map but it looks like Grade creek and Camp creek are gone. From there it looks like it's heading toward the timber.

It's been breezy all day so I'm sure it's still causing some damage and hard to get a handle on. When I get a better map of the fire I'll try and post it if anyone wants but for now you might keep that in mind as you prepare for the hunting season.

We got the Blues

Well we had a cool morning so we decided to try a short hunt before the next round of doctor visits. This has been time consuming and not our version of a good time but the boys and I are making the best of it. It wasn't a great day for points, in fact we didn't have any. But we bumped a couple of birds and both dogs got a retrieve and seemed happy about that. 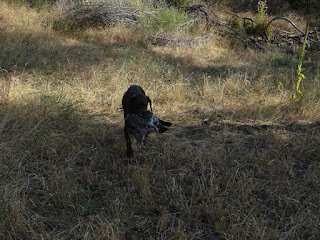 Wasn't bad for a half mile jaunt. It felt good to be out walking with a gun in hand again and the dogs knew exactly what that meant for them to do. We're looking forward to chukar season and hoping we can get on the hill soon. 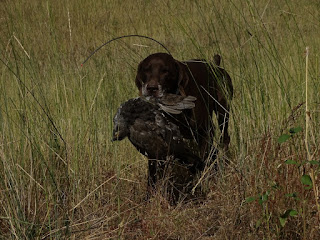 Posted by Tuckers Chukars at 2:58 PM No comments: