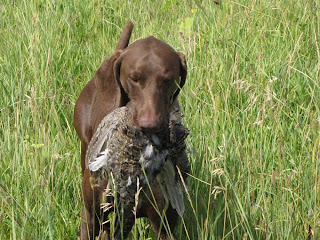 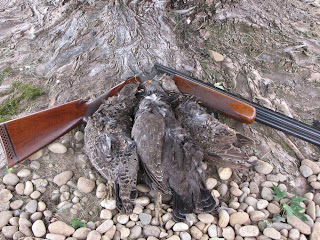 On day two we decided to hit the timbered area for some ruffs. We found six throughout the day but never got a shot at one. Riley had no problem with pointing the ruffs but they were in such thick stuff that I never could get a clear shot. I had to get down on my knees to see the bird. Riley won't break point until I flush the bird so I had to throw something in and try and flush the bird. Along the way we found some blues that were more cooperative. They seem to be more obliging getting a little more room between them and the brush creating a safer shot.
All in all they were great outings. I can see where grouse hunting could get into your blood. But for me and my dogs, we'll still take chukar hunting over the grouse. This is just my personal observation, but I think grouse hunting is more of a flushing dog sport than a pointing dog.
The chukar season starts in two weeks and I hope the weather cooperates again. It's been 7 and 1/2 months since I fired a shot at a chukar and I am eagerly waiting. The time for worrying about the hatch and getting all of my equipment ready is over. The dogs are ready and I think we've done a good job of getting rid of bad habits. Grouse hunting was my pre season hunt and now I have two weeks to the chukar opener. Time to get my game face on.
Posted by larry szurgot at 10:14 AM

LOL...you always crack me up...I appreciate you're outlook on the whole game.

I cuss the dirty buggers, but guess what I'm heading out to do right now? I call it tuning up the dogs but we all know what the truth is.

Yes. Four more days. Sky is not going to know what to do with all those chukars and huns getting up around her. It's going to be a lot of fun.

Only two days now Larry! Better get some gas in that truck!

Truck is full, guns and vests are loaded and my dogs and me are filled with anticipation. Now it's just "feet don't fail me now."
Good luck to you Steve and I hope to see you on the mountain.