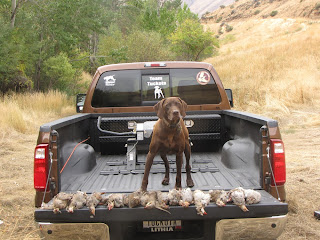 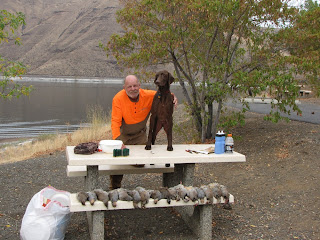 This can be a great year for those of us who decide to put some miles on the boots and let our canine partners use their instincts and abilities to find birds. The birds are out there. Here are a couple pictures of Dakota and Riley's best days this week.
Posted by larry szurgot at 7:45 AM

Larry, looks like the campground at brownlee. My youngest son, Ian, and i will be there wed night thru saturday. If you're around we'll stop by and say hello, congrats on another great hunting season underway.

I'm heading over to Lucky Peak this morning. I hope you find the birds like my dogs did. The dogs were busy most of the time sniffing the fun smells. Good luck to you and Ian.

That looks like fun! Our season opens this Saturday, but it'll open for me Sunday due to family stuff. I scouted a bit last Sunday and it looks like we should have a decent season in our local desert hills (I hope...). I saw quite a few chuks. I really want to hunt huns up there one of these days. Hope you have a great season.

Pete, I hunted a local reservoir today. Lucky Peak. I found more huns than chukars, which is unusual. If you're ever up this way give me a call and maybe we can gang up on the huns. Good luck on your opener this weekend.

Thanks, Larry. You never know -- it's a long drive but maybe I'll get motivated one day. The prospect of finding both Huns and Chukar is pretty enticing!