Yesterday I went on a hunt in Oregon. We had a good snow fall on Saturday and Sunday the sun was shining enough to partially melt the southern slopes. Even though the snow generally congregates big game animals and upland birds, I prefer less snow on the ground than most people. The way me and my dogs hunt requires covering more country and that's hard to do when there is much snow cover on the ground. There are too many obstacles under the snow. Obstacles that create bruises to the body and nice gouges in the gun. In fact I put a new ding in my gun yesterday.
As we started our hunt, the sun was shining and the temperature was 20 degrees. A brisk wind was blowing, which made it perfect for Riley' nose. There was about four inches of snow on the ground, but I knew as we got further up the hill the southern exposures would be burned off some. A mile from the truck I swept a hillside that had some burn off and I have found birds many times in the past years. There was not a bird track anywhere and the only point I got from Riley was this. 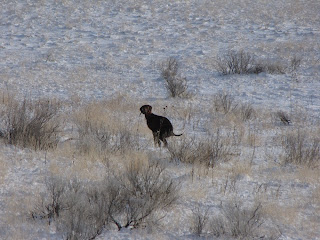 After he got a little lighter he covered big country without even indicating the smell of a bird. We hunted for 2 1/2 hours without seeing, smelling, or even seeing tracks of birds. This was the first time hunting here this year and I was beginning to believe maybe the birds had a poor hatch here. Finally after approximately 1500 feet in elevation and four miles of walking Riley locked up. Although the point wasn't anything special I decided to take a picture and then put the camera away. 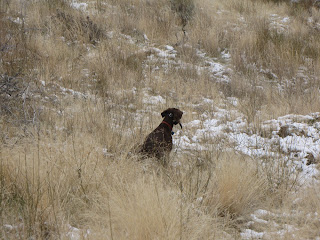 I was glad I did. The point produced some birds. The shot produced flying birds everywhere. I couldn't believe how many coveys were in the draw I was now in. There was at least five different coveys and well over 100 birds in this draw. Most of them flew around the next ridge which was into the wind for Riley and me. We were heading that way when Riley locked up again on a pair that had set tight. We dropped one of the two and all of the sudden we had three birds in the vest. As we trudged around the north slope covered with about six inches of snow, birds were still taking off from behind us. We probably could have stayed on that burned off ridge and accomplished a limit of shooting but Riley was off to where he saw the birds go.
Riley moved across the snow covered mountain much quicker than me and was soon over the top out of sight. It took me another five minutes until I was at the last point of seeing Riley and I knew since he hadn't checked back my next sighting of him would be on point. I wasn't disappointed. As I stumbled over the top of a 12 inch snow drift I found him fifty yards ahead on point. As I moved into the front Riley relocated up the hill further. He did this several times and then froze to a solid straight backed point that told me this is where they are. I moved out in front again to a flushing covey of chukars twenty yards up hill. The kind of shot you need to take your time at taking or have a bird that turns to mush at the shot. Five down and three to go.
Once again many of the birds obliged us and flew around the next ridge into the wind. Several birds were taunting us from the previous ridge and higher up on the ridge we were now on but we decided to go one more ridge. I had never been quite this far in before so I was curious as to what the next draw would bring. I was not disappointed. Riley was there long before me and had the birds pinned down. By the time we finished on this slope we had fired 12 shots and had eight birds in the bag. From the time we had the first point until the last shot was fired maybe forty five minutes had expired. We now had an hour walk back to the truck toting an empty shotgun.
We walked for three and a half hours for forty five minutes of shooting and great dog work. I put in 6.5 miles and Riley 18 miles and we shot all our birds in a one mile area. There were probably more birds if we would have gone further but that will be for another day. Even the benefits of walking the last mile back to the truck was rewarding. I saw a cougar off in the distance. I believe we might have jumped him and because of the snow on the flats saw him about 300 yards away disappearing into the sage.
After 2 and 1/2 hours of walking and not seeing any sign of a chukar I was getting a disappointed but I knew that I had always found birds in this area in the past. With the help of Riley I finally found them. They just all seemed to know where the good eating was, and it wasn't down low.
Posted by larry szurgot at 12:09 PM

Good to hear from you Steve. Hope you're having a good year.

Lots of birds this year! Having a lot of fun, but not getting out as much because someone crashed into my Suburban and totalled it a few weeks ago. So now just hunting where I can get to in my car.
Still getting into quite a few Huns and quail!
Looks like your year is going great, I am as happy for you as I can be! ;)

Sorry about the suburban Steve. Hope no one was hurt.