My 33 year old son, Doug  and I took in a chukar hunt yesterday. It was a super treat for me for two reasons. First, Doug doesn't take much time for hunting since he is in the middle of raising a fine family and second, Riley never gets to hunt for anybody else so I was interested on how he'd do. I must have been a very good boy this year because Santa Claus was very good to me and gave us a fantastic hunt. 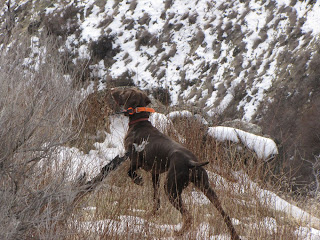 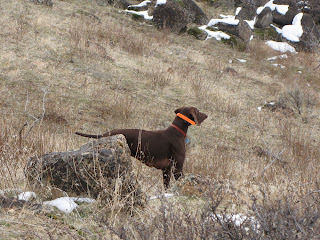 Not long into the hunt, Riley treated us to several nice points on birds that were very obliging.
As usual in chukar hunting the terrain starts separating hunters. I look up the hill and Doug is several hundred yards away trying to out run some fleeting birds. After getting his attention he slowed and waited for me and Riley to catch up. He commented how those little chickens don't play fair and the last time he saw them they were running over the ridge up ahead. Bending over trying to catch his breath, he was more then happy to let Riley do the chasing after I explained how it is supposed to work. We'll let him do the work and hopefully the chukars will hold for him. The worst that could happen is the birds flush and we haven't killed ourselves trying to catch up to them. It wasn't long and Riley was above us on point. I hung back and told Doug to try and work in on the left side of Riley for the shot. He did so and got his first chukar of the day with two shots. 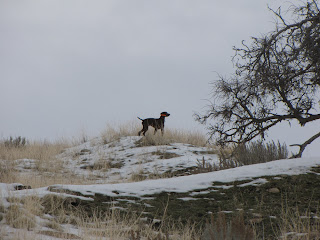 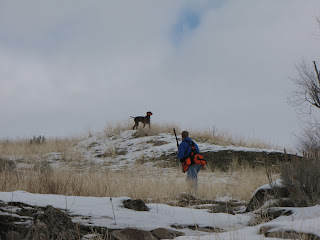 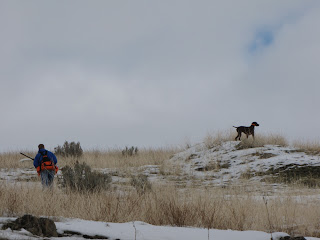 From that point on we alternated turns coming in on Riley's points. Although Doug was a little rusty with the shotgun he soon started putting the hurt down on the birds. I was thrilled the way that Riley would hold as Doug approached for the shot. He has never hunted for two people. 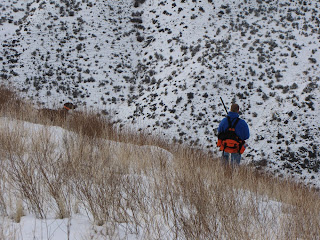 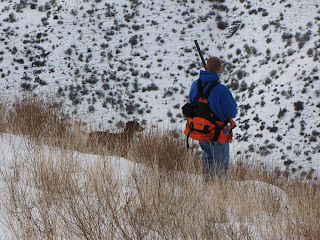 It became point after point and before the day was over we had no fewer then 25 solid points to flush birds over. If a person doesn't have a great time on a day like this than he should find another past time. 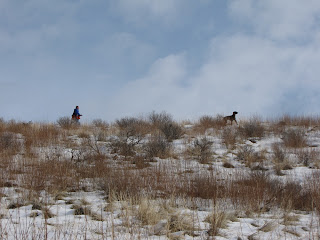 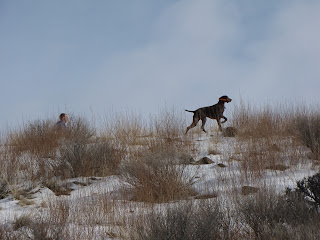 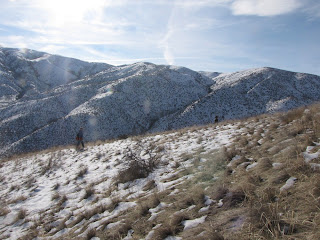 Tired legs we made it home to a fine meal of chukar cooked by Barbara but not before getting a success photo. 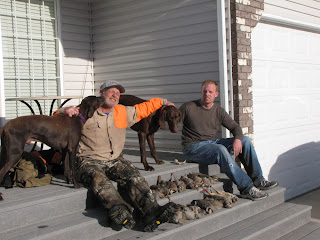 What a great early Christmas present.
Happy Holidays to all of you chukar hunters out there. May your points be solid and plentiful.
Posted by larry szurgot at 8:47 AM

Just plain awesome. You're correct -- if an upland hunter doesn't enjoy a day like that he needs to take up quilting.
Merry Christmas and thanks again for a fun little blog.

Awesome stuff Larry. Love the pictures as always. Nothing like taking loved ones out to enjoy a beautiful day in the field.