Sometimes you just need to blow your own horn

Many years ago a good friend of mine told me "you gotta blow your own horn because no  on is going to do it for you". It seems often times chukar hunters frown upon tailgate pictures. I don't know where that started but look at all the other forms of hunting. There's nothing better than those pictures of big game animals. The hunter's are proud of their trophy's and rightfully so. How many times have you seen groups of hunters behind a long line of roosters in Kansas or South Dakota or the duck hunters with both a limit of ducks and geese laid out in front of the blind. In most cases these hunters are just trying to get a memory of a great time and a chance to show their friends of how great the hunting was.

I love tailgate photos of chukars because I know how hard chukar hunting can be. I also know that it usually takes some pretty good dog work to come up with one chukar let alone 6 or 8. We'd all love to get pictures of our dogs on point and retrieving birds but most time it's tough enough getting a shot at the birds with a shotgun let alone trying to get a photo first. To me tailgate shots are more of a tribute to the dogs.

Another reason tailgate photos mean a lot to me is showing the fact that there are birds out there. Too many times I've heard the stories of low bird numbers and a lot of dismal stories of no success. I should be happy about that because that keeps many hunters at home instead of chasing the birds. But I love chukar dogs and watching them work the steep hills. The people that post pictures are usually those who have the same love as I do and are proud to show that with  a little hard work and good dogs it can be done even on down years.

In my opinion, this is a down year. I'm seeing fewer birds and getting fewer birds than I can recall over the past thirty years. But I don't want to blame it all on low bird numbers. I have a 10 month old pup to hunt behind and I'm lame so that could be some of the reason for my slower season. But even at that, we're having some pretty darn good hunts. People I am talking to are seeing a few more birds now than earlier in the season. I'm guessing that is probably because they're finding out it takes a little more work to find birds this year and the conditions are getting better for good dog work.

A chukar hunter from Utah and I have been corresponding about chukar hunting a little this year. Jordan Oyler mentioned to me that he was hearing of dismal bird numbers in eastern Oregon and western Idaho. I concurred that that was my findings. He and his brother traveled to Oregon anyway for a hunt. Afterwords he sent me this tailgate picture of his brother and dogs. 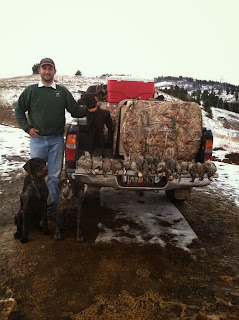 He said something to the fact that people over here must have a different opinion of low numbers than those hunters in Utah. I was ready to go up on the mountain the next day.

Post script to this photo. I'm hoping to become a GOOD friend of Jordan's. Also I'm sure the reason for their success is in the back of his truck. Ava is a solid colored GSP in her first year of hunting. Not that I'm biased or anything.

Here's a success picture of the greatest chukar hunter I've ever hunted with. Greg Allen and his girls will always be able to find birds if they're there. His favorite saying is you can't get satisfaction unless you get to the top of the hill 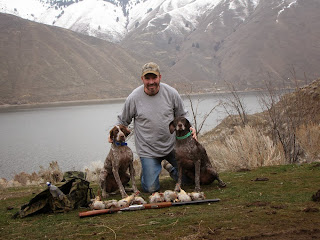 And then there's Jake. Just being with him, as was with my boys of the past, keeps me encouraged to push on. Sometimes we even limit out. 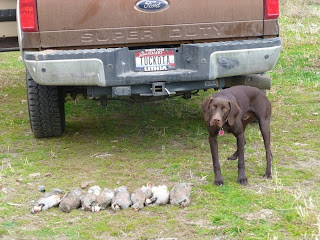 So, now that Barb has showed me how to transfer pictures, send them my way. I'll blow your horn for you. I'd be damn proud to show off the fun we chukar hunters have.
Posted by larry szurgot at 8:20 PM

I like those tailgate pictures too Larry.Especially when the dog is in the photo. I still have pictures from the mid 60's when I had my pointer Lady. I sometimes look back and cherish the times we hunted rice fields together in Norhern California. Those were grand days with lots of ringnecks on the tailgate.I doubt if you can find a place to hunt there now. That dog Jake is quite the chukar dog and I bet he sleeps well at night. Good luck on the knee.

Both Jake and I thank you for your nice comments. That's the sad thing about pheasant hunting in most of the northwest. The pheasant country is diminishing. Most of the chukar country is unwanted by anyone that has any brains so I'm counting on lot's of great years to come.