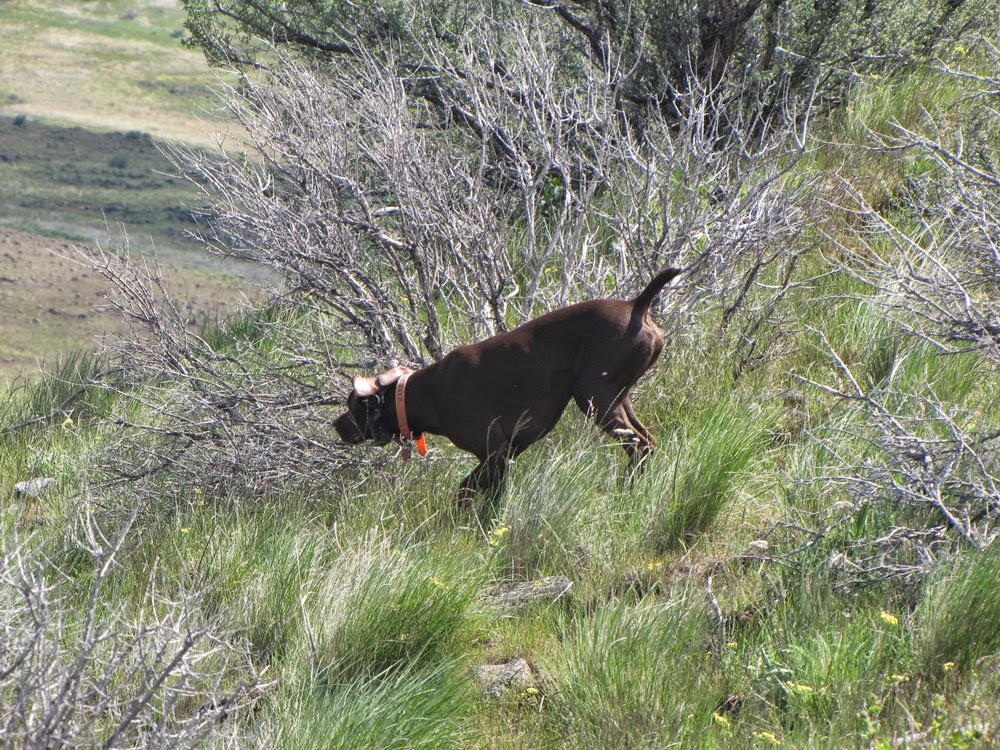 Posted by larry szurgot at 7:24 PM

Larry,
Wow! Those numbers really showed a decline.I hope the weather is cooperative for the hatch. If business continues to pick up, I may be able to make it down this next Nov. I have to figure out how to get Mays and the jumbo crate down to Portland. From there, I rent a car and drive to Idaho.Most of the airlines only take a x-lg crate. Maybe I should look into a livestock hauler...
Alan

If you do get down here make sure you contact me. I'd love to see that tiny GSP of yours chasing some birds. You have a place to put a sleeping bag in my camper anytime.
A chukar hunting friend from Utah (whom I haven't visually met yet either) sent me a lot of interesting facts on the bird counts also. If I can figure out how to get his e-mail transferred I'll do so.
It's raining now and fairly warm so the green up should last a while longer. We're heading over to Brownlee for the next three days to check things out. Hopefully the birds are putting down about 18 eggs per nest. (I wish)

This past year just got me excited for the upcoming season - I kept hearing it was the worst year ever - and it was a harder year than most but I personally still saw enough birds to make it a blast. I just kept thinking, all season, that if this is the Worst year ever I can't even imagine what a great year is like!!! Love your optimism Larry.

Interesting statistics. I would speculate that the harvest statistics paint a worse picture than what the actual population was. Chukar hunting can be a frustrating life style and I can see where many hunters hunted much fewer days and covered less ground per hunt because it wasn't always reasonable to find birds in the first couple hours (just my speculation). Glad to hear you are optimistic for this year. It seems everything is shaping up perfectly. I remember last year there were hill sides that were bare that are now covered with knee high vegetation. I would think that would correspond with bug production? Jack and I are keeping our fingers crossed for the next couple months.

Thanks you. Here's more optimism. We just got back from three days over at Brownlee and we saw and heard plenty of chukars hopefully laying lot's of eggs. When we got home we had a pair of geese with 23 young ones in tow. Boy, if the chukars could duplicate that we'd really be in business.