It's almost that time again.

Yep, the weather is warming up quickly this year. It was in the mid 70's yesterday while Jake and I were out strolling. A friend of mine, Ed Bird, has a new Brittany and I understand he's in the training process. I know Ed reads this blog occasionally and this next picture will ruin him on training with wild birds for the rest of this year. He hates snakes. Although I prefer not to be surprised by them, I am confident enough with Jake's avoidance training that we still will keep doing our thing on the hill. I hope I didn't just put the jinx on us.

Right now most snakes are just emerging from the dens for short intervals to sun themselves and aren't moving too far away. If a guy stays away from those likely rock piles this time of the year, he'll probably never see one. But by June they'll be traveling and encounters will become more common and the snakes will be more aggressive than now. A good thing to avoid this time of the year when it is pretty warm is to let your dog chase rock chuck's and similar critters. Snakes like to den in the same type area that the rock chucks like. This rattler was a monster. The one looking at the lens is a normal sized snake. It's easy to see why they call them diamond heads. 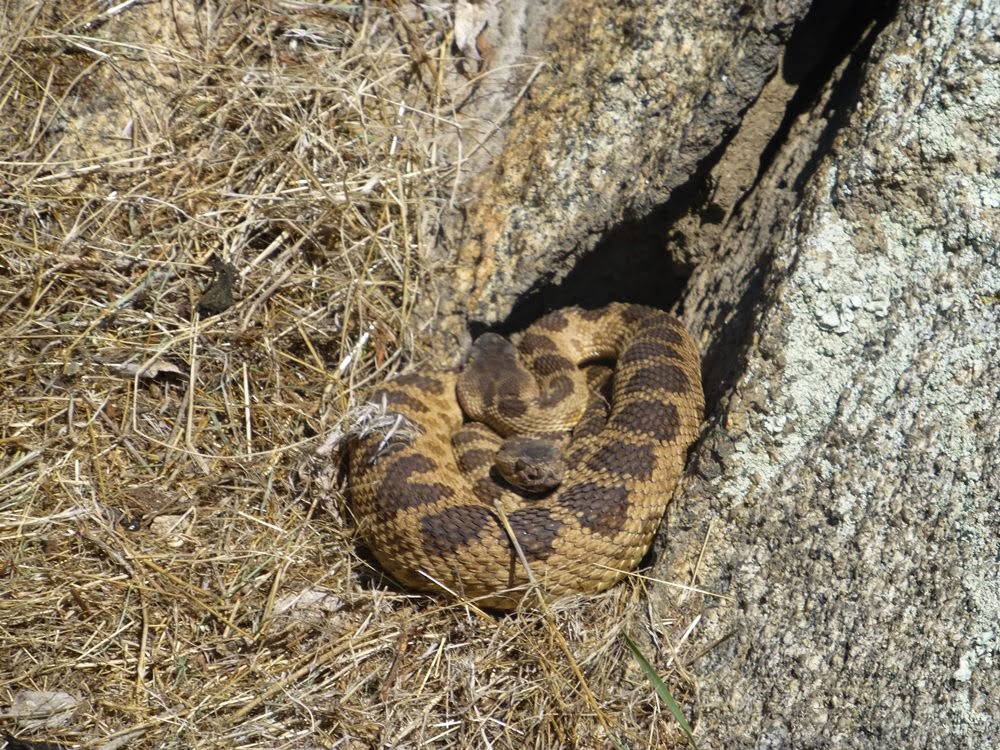 My second encounter was with a little smaller snake. I'm not sure, but I think there were two snakes here also. After looking at the picture, I don't think the rattle and the snake belong together. Both places were southwest facing rocks with plenty of sun hitting the rocks all day. 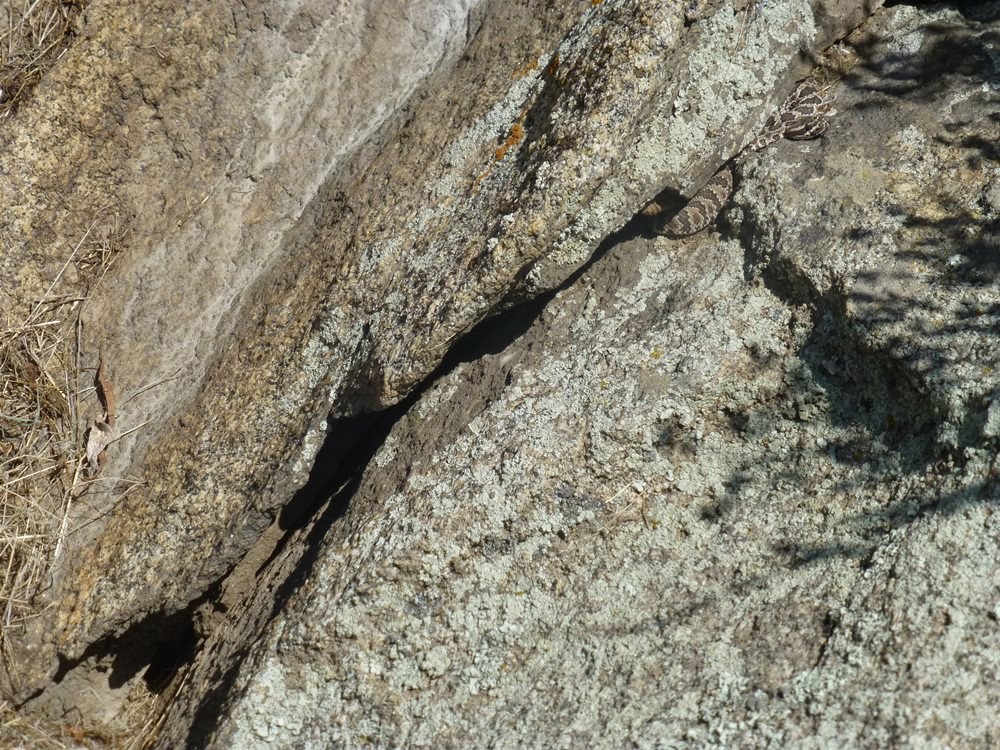 The other common spring encounter is ticks. I'm tickled (get the pun) to report only finding one so far this year. It was on Conner and I understand he took one home also. His mom made the report back to me. Obviously, she wasn't excited to see one crawling up the wall where Conner had left his backpack. Jake hasn't had any on him that I could find. Usually by this time of the year I have pulled several dozens from the dogs although very few are embedded.

In my opinion, neither are worth keeping out of the mountains for, but are just worth being aware of. Just try and be aware of snaky looking areas and try and avoid them if possible and check your mutt for ticks the same as you do for cheat and cuts at the end of each trip and all well be well. Trust me, Ed.
Posted by larry szurgot at 6:16 PM

I do not miss the snakes, actually prefer the bears up here if I had to choose. Never had any trouble with either so I hope that trend continues!

Larry. You know me all to well those pictures freaked me out. You are a brave man Larry I am still training and will be calling you soon for some help. Please continue writing cause I truly enjoy your adventures. Eddie

I'm like Larry Semmens.Despite growing up around rattle snakes,I never really got over being scared of them . Probably due to fear of one biting my dog. Thats why I come to Idaho in Nov. Haven't seen one yet that time of year. I haven't had issues with bears yet either. They usually just run away. I'm trying to figure a way to make it down next Nov. My old dog is not getting any younger . For that matter, neither am I. Thanks for posting Larry.
Alan and Mays