The way it's supposed to be

This was the spring break week for students so I was lucky enough to have Conner spend a few days with me. As usual he wanted to spend our time together on the mountain. So we loaded up the truck, had Jake jump up into the back seat and headed out for a couple of days. We headed west to an area I had chukar hunted in the past but decided to scout some new country. It ended up being a great decision.

In two days of hiking, Conner and I put on 16 miles with almost 5000 feet of vertical gain while Jake was short of fifty miles by two miles and who knows how many vertical feet he got in. Although we had every kind of weather, most of the time it was perfect for hiking. Conner never seems to get tired of hiking and exploring and Jake loves the extra companionship he provides. 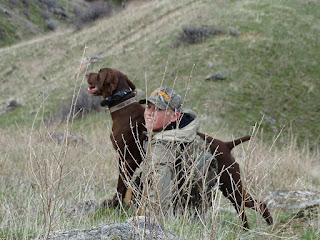 Conner has a thing about finding sheds and although we never found the honey hole of antlers, he found enough to keep him looking while loading both his pack and mine with junk found on the hill. Those treasures include the many things we all find while out, water bottles, sardine cans, birthday balloons, shotgun shells, and believe it or not a coat hanger. Conner and I tried to figure it's worth on the mountain but couldn't come up with a logical explanation. 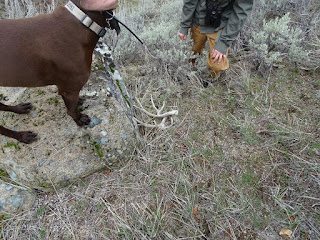 Meanwhile I'm trying to locate Jake to see what he is pointing. This new draw up by no tell em lookout is turning out to be a great find. With Jake on point I have Conner flush the birds while I snap pictures. The three of us had several opportunities, but most of the time I failed in doing my job. 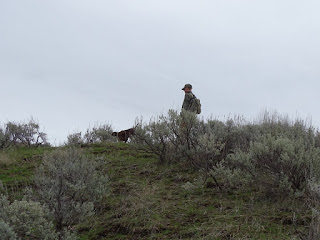 Most of pictures of the flush were just blurs but I managed to capture several shots of chukar. To those interested, we never saw a covey of chukar but all pairs and a couple of singles. To my knowledge that is good news. If they stay in coveys or covey back up later, the hatch will probably be poorer. 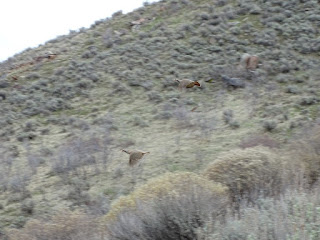 What makes this new area such a great find was the amount of blues we saw. We saw at least a dozen blue grouse each day and probably more like 15 to 20. A few of the birds might have been seen more than once. Each day was at completely different locations thus making this a bonus area for the 2017 upland season. 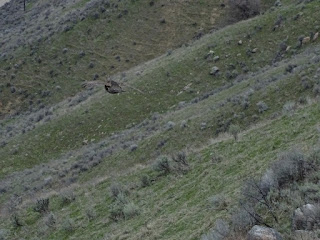 It's an easy place to find once you get to no tell em lookout. Now put these two days together and imagine you are a 14 year old boy on spring break with four more days before you have to be back in school and your other grand parents are heading for Riggins. Yes, the steelhead are running and three hours after they picked up Conner, he texts me this picture. 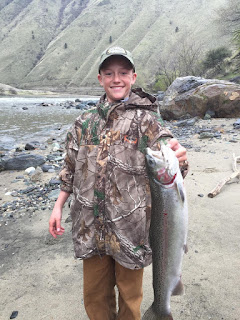 I haven't heard back from him since that picture but I'm sure he is beating the water and having the kind of time all 14 year old boys and girls deserve. Now that's the way it is supposed to be. Thank you Idaho.
Posted by larry szurgot at 3:05 PM

Wow, can I be Conner II? Exploring the hills with Grandpa and then having an "easy" day pulling in a bright steelhead. Cant get better than that, and his smiles say he agrees.

Good to hear from you Greg. I hope the big sky country faired over the winter as well as we did.