Making another trip to remember

It started out with uncertainty. I was going into a place I have hunted several times in the past years but have always walked in from the main road. A few times I saw ATVs back in there so I decided today I would take my side by side in and make a shorter walk. It didn't take long to figure out why I walk in. The rock loaded trail was beating me and the dogs to death. Grady finally decided the only safe place was to sit behind me and lodge me against the steering wheel thus keeping him immobile while Jake kept falling off the seat onto the floor and compressing the gas pedal to help keep things exciting. About four miles down the trail I noticed the right front tire was a little low. So, thanks to the lessons from the California crew, I got my trusted can of fix a flat out and figured I fill the tire. I shook the can as instructed and screwed the cap on and air started coming out of the tire so I quickly depressed the button and nothing happened. I unscrewed the cap and found the can of air and goo was frozen solid. Now the tire was low enough that I didn't want to drive any further.

I looked up the hill and decided it looked like a great place to hunt. I parked the side by side and contemplated on setting the can on the hot engine than came to my senses not knowing what kind of explosion I might create. Instead I placed the can next to a tire facing the sun with hopes of it thawing out. The boys were ready to start having some fun so off we went. About two hours into the trip I realized why I had never hunted that place before. We crossed over the canyon to see if the other ridge had any more to offer. To my excitement the dogs found a good covey of chukars but they dove off the ridge with the wind to their back with no shots fired. I might have got a shot had I heard them taking off but my ears were covered with muffs to keep them warm. Who wears muffs on Oct. 31.

Things started picking up with a point on a small group of huns and a second group of chukars but luck always had me in the wrong position to fire. Finally my Alpha says dog on point. I was just about to cross one of those short rock slides and I peaked at the Alpha to see where the dogs were. For some reason my small chukar brain didn't activate my legs to halt and I tripped over one rock hitting the remainder of the slide with my face, gun and Alpha. My first concern was the terrible sound my gun made as it hit the rocks. As I looked over the damage I realized a steady flow of blood onto the stock might be a reason to assess the damage to me. Wow! My nose sure felt big and there was quite a bit of that red stuff coming out. I don't even remember if the birds flushed or what happened but both dogs were right there seeing which one could lick the most blood off. I inserted some toilet paper and used one of the dogs cold water bottles to help stop the bleeding. After about ten minutes we started back off the hill. I finally figured out that my nose wan't as swollen as I thought but just shifted some to the left side of my face. I remembered the drill from my baseball days and running into the left field fence and having to realign my nose and with a quick pop and more blood we were back to walking. 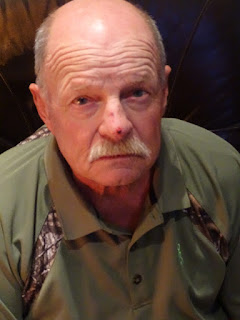 It looks a lot better now that I've showered but trust me I'll have some good black eyes in a couple of days.

The Alpha didn't sustain any damage but my shotgun didn't fare so well. I got some good scratches on the stock, 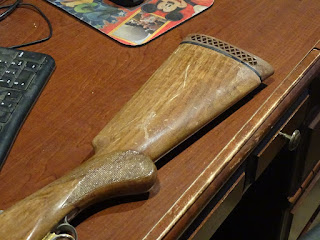 a small chunk out of the forearm as well as a dent in the rib vent and some barrel scratches. 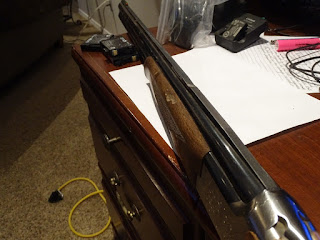 But things got better from that point on. We found a few more coveys on the way back to the side by side and actually ended up with two chukars and two huns by the time we reached the side by side. I was surprised to shoot so well with my eyes watering like they were. The can of fix a flat had thawed and we got the tire back up to normal before heading back to the truck. Grady was not moving from the drivers seat and our ride back to the truck was cramped for me but comfy for him. I checked the temperature on my truck when we got there and it had risen all the way up to 36. The good news is that it's supposed to get warmer.

Be safe out there, get some birds and treat those dogs to some good times.
Posted by Tuckers Chukars at 5:19 PM

Dang Larry....I would consider yourself lucky that the fix a flat worked.....those four birds would have seemed light compared to carrying the side by side. Give yourself 10 more years and you will appreciate both just finish standing and finding your way back to your rig. Bird action is just a bonus. BTW, its still colder up here.

Greg, that's almost the same thing Barbara said this morning as I rolled out of bed. She just left out the 10 more years. She wasn't happy about the bloody pillow. A bruised chest and swollen knee added to the injuries this morning making my gun not look so bad. Brrrrrr. the fire place fills great this morning.

When the going gets tough-----they still shoot a few birds. Glad you are OK--don't worry about the gun. That is character.

I did just order a Garmin satellite responder. I hunt alone too often and I take big, fast steps when I shouldn't......

Amen to that. Barb got me a spot a couple of years ago. Hope I never have to use it but it's nice to know at least someone will be able to find my dogs.

If this chukar hunting was easy and no challenge.....well, you know the rest of it. I bought a well used OU to absorb the falls I was taking in the steep pursuits. It is a relic now. Old you have the "come find me" alarm on your person. Enjoy the rest of the season.

should say: "Glad you have the come find me alarm on your person" Gentleman from Tennessee

As the song says "NOTHING AIN'T COOL TILL YOU WEAR THE NEW OFF"!

Sounds like a tough hunt for sure! Glad you made it out! We are back in ID. Hunted a couple times and found a few huns and chukar the first day. Pup is hunting well, but loves to bust them. Annie has a knee problem at least that's what my hometown vet thinks. Planning to get it checked by the vet in Sun Valley that does a lot of ACL surgeries.

Be careful out there.I hunt alone a lot too. I don’t cover the ground I used to but keep going just to get me and the dog out.I have to get a can of that stuff for the flat. just broke the shift lever on my ranger.Dont ask.....Keep having fun,you are a tough man.
Alan and the setter