You got to believe

Five more days of hunting in 2020 and like most people I have to say it wasn't the best for me. But even at that, it doesn't take much looking to realize how lucky I am and there are many out there not as fortunate as I am.

As far as for me personally, you all know about my leg and back surgeries that are still up in the air as to whether they might need some tweeking, but no matter what I'm still able to get on the mountain. The new complication came December 8th when I was knocked flat by Covid. It was about as sick as I can remember being, but I probably said the same thing the last time I had the Flu. I was down for about three days and felt I was coming back and after a hunt with the boys I was down for another three. The Doc gave me some steroids and told me to treat it like the Flu and just take care. So me and the boys were soon on the mountain again. This disease seems to attack all the old injuries on the body and I have had a few. My lungs burnt like the first day of football practice and needless to say the dogs did a lot of waiting for me. But waiting they did and encouraged me up the hill.

The good news is that even though I'm still having some lung issues, I'm not contagious anymore and Covid is a thing of the past for me.

Jake and Grady have had an up and down year. I believe the downs were mainly caused by my inability to move on the mountain as we have in the past and they had a tough time adjusting to me. We found decent bird numbers but had far too much busting of birds. For the most part, I held back from shooting those birds but was never in position to correct any bad habits forming. Luckily, as the season progressed the boys got it figured out on their own. My camera has been left in the truck most of this season so I don't have the proof of how the boys came around but they really got solid again for me. Here's a couple taken when I did have the camera. Jake 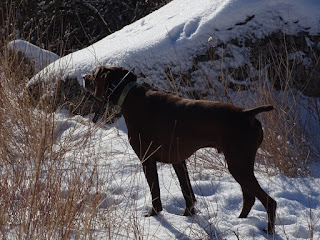 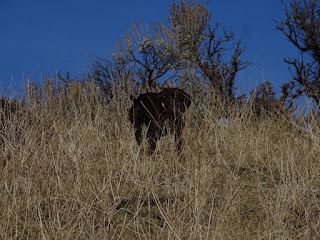 The two of them have carried me through what could have been a very slow season if I hadn't believed in them, the birds and me. I really believed that I would recover much faster from my injuries and that part was a little disappointing but my belief in the dogs and birds kept me coming back. I knew the boys would turn it around and give me some great opportunities if I just kept going back and they didn't let me down. Even though there was a lot of pessimism from many hunters on the bird numbers this year I knew that those hunters would quit hunting and leave that many more mountains to search chukars out. I was right. I haven't seen another hunter or heard one in a month. But I have seen more birds than expected. Put being on the mountain together with two dogs and lot's of birds and you have a recipe for success. 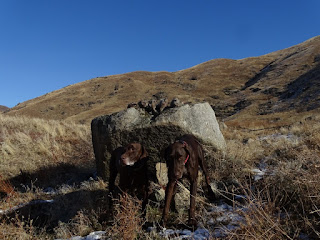 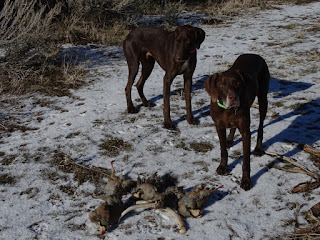 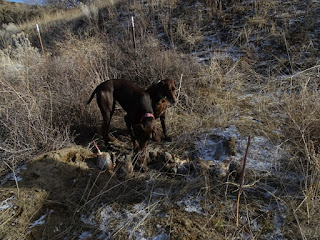 then you'll never have these days.
These were the results of my last three hunts. The only bragging I mean by these pictures is of those two dogs. I can't remember the last time my lungs burned like those hunts. It was hard to even get out of the truck and get started but once I did the excitement of those two transferred to me and I knew I was in for another fun journey. None of those trips started out finding birds early and it would have been easy to turn back and go another day but I believed the dogs would eventually find birds and they did. And while on the mountain I saw so much country we hadn't even touched yet and showed great possibilities. Country I believe has to have birds covering the slopes for my dogs to find. I still have another month to find the legs to get there and create another memory.
Posted by Tuckers Chukars at 12:07 PM

Hang in there Larry. With all you have been through,you have had a good season. 4 more days of pheasants and then I’ll head for the hills.
You made a great effort to get those dogs out and they know it hasn’t been easy on you. Keep moving forward...
Alan, Gracie and piper

You are always inspirational!! Glad you are having some good days.
Thanks!

Thank you both. From the very beginning of this blog I have always wanted to be as positive about chukar hunting as I can be. My wife calls it an ambassador for the great sport of upland hunting. It has been so good to me I only hope more people can enjoy it as much as I have.