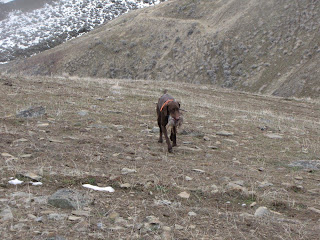 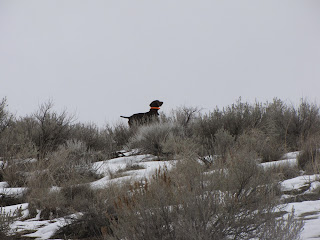 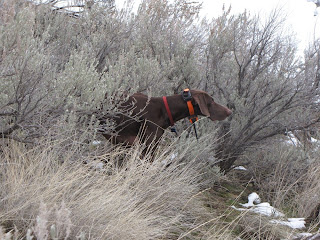 As this hunting season comes to an end I like to look back through my journal to see what I need to work on and what is working well. The first thing that jumped out at me was my shooting. As usual I need a lot of help there. But, the most important thing to me is how I feel the dogs performed. As usual they get an A+. To someone else they may be a lot lower on the grading system. It depends on what we expect from them.


Once again, I learned a lot from my dogs this year. I've trained every dog I've owned and helped a few other friends train their dogs. I am not even close to being a professional, but I know what I want from a dog and what to expect from him. Too often I get reading some article about hunting with dogs and get to thinking "I wonder if I should get my dog to this stage?"


This can stir up a lot of heat, but I believe there are different expectations from trial dogs and hunting dogs. Trial dogs are trained mainly for a possible monetary gain. If you have a top notch trial dog, people want pups from him or her. Trial dogs make good hunting companions, but you must keep them honest at all times, otherwise they may pick up bad habits before their next trial. When a hunting dog breaks the rules it's just a lost bird. Nothing else.


Trainers and training books can show you the hows and whys. Their methods work very well, but once again, a lot of the things they have incorporated may not be useful to the way you hunt. That is one of the big things I learned this year. I've read lots of books on training and talked to a few big trainers. I heard a lot of this stuff about stop to flush, retrieve to hand, hold through the shot, and many others. I've never trained a dog to stop to flush until this year. I thought it might help me get those straggling chukars that some times take off well after the others have departed. I thought it would be kind of neat to have a dog that was a little closer to a trial dog. I was wrong.


Riley has been a very trainable dog. Not only is he a great athlete, he's pretty smart. I trained him to stop to flush. That means he is to stop and stand when a bird is flushed. That may be very pretty in a trial situation, but it's a pain in the tail during chukar hunting. I can't tell you how many times I've approached Riley thinking he was on point and the birds were long gone. Many times I've seen the birds fly and Riley stop, and no matter how much coaxing I give, he won't move until I walk ahead of him and say O.K. If I'm behind him, below him or anyplace else, he won't move. All we have accomplished here is me putting on more miles and elevation. A good hunting dog is often busting birds through no fault of their own. If you have to go to the dog each time this happens you could be putting in 3 or 4 extra miles a day. Hopefully I can solve this problem after the season.


Books and trainers can teach us a lot. But we have to decide what we are going to expect from our canine partner. Most of the time it's going to be you and the dog, so it should be trained for you. Don't try to keep up with the Jones.


What do I expect from my dogs? My dogs are all males so it's easier if I just refer to our dogs as him. As far as obedience commands I just expect him to come when I call or whistle and whoa when I say. When I give these commands it's a must, not only for hunting but for safety reasons. I also train them to heel on my left. I don't care if they fall behind a little or get a few steps in front of me. I just want them to walk with me. I want my dogs to hold point until I flush the birds. Others may want the dog to flush the bird on a command. I have no problem with a dog that relocates (in fact I like it), but if he busts the birds trying to get too close I don't shoot and then will whoa him. I never whoa when he is on point or he is creeping in on a point, just when he flushes the birds through his own fault. I do expect him to honor, and I have had great success with this. I don't require a retrieve to hand. I want him to get the bird to me and I can bend over and pick it up or even take a couple steps. Chukar dogs work hard going up and down steep hills. If I'm too lazy to help with the retrieve maybe I should find another game. I do try and encourage him to place the bird above me so it rolls down hill to me. If he drops the bird and it starts heading down hill I let him chase it and bring it back to me. It's amazing how fast they learn to hold onto a cripple until you have it. Also I allow my boys to get after the birds the minute I fire a shot (or realistically on the flush). I believe they lose fewer birds that way.


In return for this, my dogs expect me to let them be hunting dogs. They want to hunt and not be guided. They are a far superior predator than I am. So I trust them and don't stop them before they go over the next ridge. If they bust a covey, it wasn't intentional. It's impossible to cover all the country with the wind in your face. Most dogs will bump as many birds as they point. That is part of finding birds.


So treat your dog as the partner he is. Don't over expect and pat him on the head when he does good. Forget about it when things go wrong. He doesn't scold you for missing birds or taking too long to get up the hill. Like you he is just enjoying the hell out of being in the hills.

Posted by larry szurgot at 4:57 PM

Excellent post Larry!! You and I think a lot alike about these things - except you are in better shape to get to them quickly, I like them to stay in sight if possible. I do try to keep in mind that it should be a "partnership" like you said. Keep up the great work on this blog!

Once again very good discussion on a new topic, hunting dogs vs trial dogs. You have a talent for writing. Best regards...Mike

This might be for the beginner but I don't know how many times I tried to tell my dogs where to hunt. Like you said they are much better predators than we are and it takes time to trust our partners and let them learn where to hunt. They are amazingly fast at learning the difference between hunting chukar, quail, or pheasants. Usually in less than a day my dogs adapted to the different type of game.

Beginners or old timers need to be refreshed once in a while. Two weeks ago I tried to get Riley to fetch a bird that fell a hundred yards below me. He kept running off to one side. I'd call him back and say "dead bird". He'd get to where I thought the bird was and side hill again. After three times I finally shut up and guess who showed up with the bird. Sometimes it takes a two by four to the side of my head to remind me to practice what I preach.

Steve, That's the main point. As time goes on it gets harder getting up and down the hills. There will come a time when I can't get up the hill as fast as I would like, so why train the dog to get out there? That's what being a team is all about. Working together within our abilities.

I just came across your blog and I enjoy it a lot. I hunt chuks in California, but I suspect our experiences are very similar! Regards, -Pete

Thanks Pete. I'd like to hear some of your experiences.
Larry

Don't get me started...! Just kidding, but as my wife will attest, upland hunting is my passion, especially for chukar. I hunt almost exclusively in Southern California, mostly in the Mojave Desert. It appears, based on the pictures you show, that we hunt very similar terrain - rocky, steep, cheatgrass, etc. I even hunted chuks a few days in the snow this past season. Unfortunately, I don't have a dog, so my regular hunting buddy and I mostly count on our hearing and sense for where the birds are to get us to them. Sometimes we're successful. (I'd post a photo or two if I could figure out how). One of these days I hope to do a hunting trip to your beautiful state.

Pete, I haven't been able to figure out how people can put pictures in a blog either. Kind of ruins some of the fun. Chukar hunting definitely is addictive. But as I tell my wife, what a wonderful drug, it actually gets you in shape. If your wife likes you, she'll never let you get a chukar dog. The addiction becomes even worse. If you're ever in the state look me up, we could chase some birds together.
Larry

Just stumbled on your site here and read this post, certainly has given me something to think about, my gwp and I have not been seeing eye to eye on the hill the last couple of outings and Im picking its me trying to over handle her, when she knows how to find the birds, I just need to let her do her thing and then do my bit.[IMG]http://i111.photobucket.com/albums/n150/hamiora/IMG_5365.jpg[/IMG]

Thanks Hamstring. Usually our dogs can teach us a thing or two.