To shoot or not to shoot

I was having lunch with another chukar hunter yesterday and dogs were the topic of discussion, as usual. This was Mike's second year of chukar hunting and he has done a very fine job of training Aspen, his GSP. She is doing a very good job of pointing and loves to retrieve. She needs some work on backing and we'll be working on that in the upcoming months. I only hunted with Mike twice, but I could tell he was very safe minded when it came to firing a shot.
Well, after visiting with him yesterday, I found that it was more than just safety. He didn't want to shoot around me if his dog wasn't locked up. Every shot he saw me take was when Riley was locked dead solid on point and figured that was the way it was supposed to be. He told me he finally had to start shooting birds that either he flushed or the birds flushed once in a while or the shooting was going to be minimal.
He finally asked me if I only shot birds that Riley had pointed and I flushed. My answer was an emphatic ALWAYS SOMETIMES. It seems I was lucky and he saw me shoot four times at birds that were held perfect but he didn't get to see what happened after Riley and I disappeared over the rise.
I wish my dogs were so good that it was always a point, my flush, a shot and then a retrieve. But neither me or the dog are that good. Anyone that says that the only time they shoot a bird is when it is just right either gets very few birds or is distorting the truth.
The first year of training/hunting a dog I try not to shoot busted birds or passer bys, but after I know the dog knows what he's doing I change my thoughts some. Every dog and every hunter is different and we should style our hunting behind the dogs and the hunter. Too many hunters read books and magazines from trainers and trial dogs and figure that's the way it should be. Those big time trialer's and trainers are making a living off those dogs and if they don't win so many awards who is going to buy a pup from them? Most of those dogs are taken out of the field once they make a mistake and returned to retry another day. Most hunters wouldn't make it a half mile from the truck if that were the rules in hunting.
Mike admittedly didn't get a  much shooting last year as he would have liked. It didn't hurt anything but didn't help much either. Shooting birds is part of the equation also. Dog points, hunter flushes, hunter shoots and then the dog retrieves. That's the way it is supposed to work. So what do I do when the bird flushes wild or the dog flushes the bird?
It depends on the situation for me and my dogs. We are not perfectionists, but I want to keep it hunting with a partner (my dog) and not just killing. I try and never shoot at a bird that is intentionally busted by the dog. They know what their job is and that is to point birds and hold them. There is an exception to every rule. For me that is when those darned chukars are doing mach 1 up the slope and my dogs try pointing them but they just keep on moving up. There is a point when the dog gets tired of pointing running birds and finally rushes for the flush. If those birds fly over me I'm going to try and take one down. I can't think of many other times I'll shoot at a bird that my dogs intentionally chase up.
There are many other times that aren't perfect that I'll shoot at the chukars also. There are the times when I flush the birds and my boys have nothing to do with the flush. If the situation is safe, I'll shoot and then direct the dog for a retrieve if he doesn't see the bird go down. There are the times when the birds flush from a point before I flush them. This is no fault of the dog so why not take the shot and reward the dog for a good job done.
Another question Mike asked was if I made Riley stay until I released him for the fetch? Once again, I'm not a perfectionist so i let my dogs break on the flush. There are many pro and cons on the subject such as safety or the dogs busting more birds when he breaks but I deal with those issues in my own ways. I'm responsible for my dogs safety and I don't care if I get more then one bird out of the covey.
These two pictures are a good example of what I'm talking about when it comes to safety. This first picture Riley is holding a pair of huns between him and I. 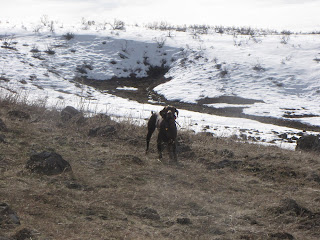 I move in for the flush and after I flush the birds Riley breaks. As you can see there is not a safe shot. Possibly if Riley hadn't broke I might have been able to take a shot. A broke dog would still be at point at this stage but I'm not willing to add the additional pressure to my dogs. 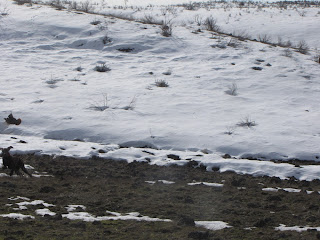 Hunting for me is pleasure. I don't have to kill a bird to have an enjoyable hunt,  but I do base my success on the number of birds that me and my dogs bag while hunting together as cooperative partners. A few of my most memorable hunts were with the game bag empty but the most successful hunt I ever had was with 8 chukars and 8 huns weighing me down after my dog and I worked together as a team.
Posted by larry szurgot at 8:39 PM