Being able to take off and hunt for a week or so is one of the great perks with getting older. Riley and I just spent four days hunting Brownlee reservoir on the Idaho side. Not only did we save a lot of gas, we found some new country to chase the devil birds in. A couple of the places we discovered may never be seen by me again but the birds were there in large numbers. The miles and steepness may restrict me from getting into these spots in the future. It was still exciting to know that these fairly untouched places still exist for the hunter that doesn't mind being a little sore at the end of the day.

Riley and I are going into our fifth year together and I must say we are working like a fine tuned machine together. We both have our screw ups, but not a word has to be said because we know we'll make it right the next covey that we find. We lost one bird that hit the ground. That is only the second lost bird of the season. The first, we knew where it was but couldn't get to it because of the steep rocks it lodged itself in. There have been some that I have dropped a leg or knocked some feathers out of that we aren't sure if they went down or not but out of the ones that hit the ground, only two losses is pretty darn good.

In the four days I only ran into one other chukar hunter (Herry and his dog Max). He offered me a ride on the road I was walking on but I had just a short ways to my truck so I declined. Herry has a good looking male solid colored GSP and you know my feelings about those dogs.  Also Greg Allen hunted with me on the fourth day. His shots were the only shots I heard besides my own in four days.

My camera's zoom wasn't working properly so I didn't get as many pictures as I hoped. Here are a few of the sights I saw dozen of times. Riley is out here on point at 289 yards somewhere. 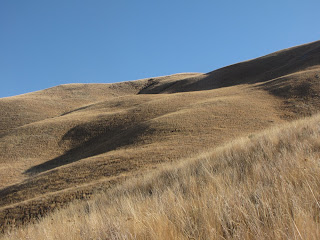 There he is. I'll just move in a little. 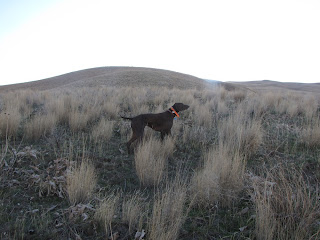 Good team work has it's rewards. 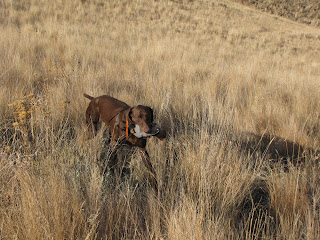 This is the end of the day results. Because of the number of birds and the great country this can be a fairly common scene. 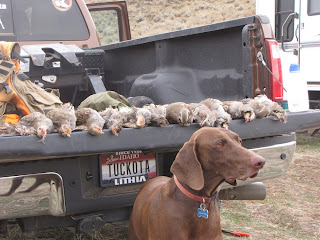 Now it's time to clean up around the house and prepare for the next big outing.
Posted by larry szurgot at 9:04 AM

I'm 25 and an aspiring chukar hunter. I've hunted them growing up with our English Springer Spaniel. I've never had much luck. I'm currently looking for a new chukar dog. I'm researching different breeds and breeders. What advice do you have for me? I'd love to see Riley work birds sometime.

Jordan, that's kind of a tough one. I'm obviously biased towards GSP, but I think there are many great chukar dogs out there. My opinion is, before you choose a breed or dog be honest with yourself about the kind of person you are and find the dog that fits you best.
I'm a big time walker, so I like a dog that will cover a little more country. I mainly hunt chukars and huns so I don't need a dog that will also retrieve in cold water or will bust through the thick brush that quail usually hide in.
Some dogs are softer than others, so if you are a pretty demanding person you might look for a dog with a little more tolerance.
All hunting dogs will work great if you know what you want from the beginning and you let your hunting partner work it out with you. Don't know where you live, but maybe we can connect on a hunt some time.
Good luck.