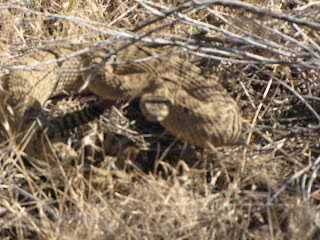 Luckily, the snake wasn't very interested in Jake either. It was the biggest rattler I have ever seen and wasn't too happy when I started poking a stick at it. I'm sure Jake didn't even know the snake was there but I was wondering whether the snake avoidance class had sunk in. About ten minutes late,r I saw Jake almost do a back flip off the trail about fifty yards ahead of me. There was a shed skin on the trail and Jake wanted nothing to do with it. Evidently the class worked.
Anyhow, let's keep our fingers crossed for the Sept. 21st opener. Hopefully all the young chukars will be filling up with grasshoppers and gaining the strength to give our dogs a great fall work out.
Posted by larry szurgot at 8:40 PM

Man you said it - snakes have been bad here this year as well. My pup did the training about a month ago. I wasn't very happy with the "efficiency" they ran the dogs through the course with, and I question the retention myself. I'm glad your pup flipped his lid at a shed.
Our season starts second Saturday of October, and if it's cold enough we won't see many active snakes. But I have nearly stepped on one on the opener before.

I've been fortunate and not seen that many during the hunting season but have seen them as late as Oct. 29th. Luckily they're out only for a short time that late in the year and you can usually predict about where they'll be. I have only seen one rattler in Oregon and that is probably because of the later opener. Good luck on your upcoming season with your pup.

Instead of snakes(none in Alaska) we have to worry about bears. I've only seen black bears while hunting for ptarmigan and grouse but I go into to some places that have brown bears. I was hoping to drag you up for ptarmigan hunting as its always safer with more people and dogs. I hope that pup works out well for you,I think he will based on his progress so far. Take care and good hunting to you and Jake.
Alan

I get it now. You wanted Jake and I to come up there because I'm slower than you. The bear catches me and you and Mays are safe back at camp. Problem with that is than you'd be stuck with this turbo charged shorthair.

Larry,
I stopped running along time ago. I'm afraid if they are that hungry I will make a meal for them. I will fire a couple slugs at them before they make it to me. Mays would be running with you and Jake or hiding behind me. The weather has been fantastic up here this summer. I can't believe the sunshine and warm weather. Hopefully you can make it up some day. I understand you want to be with Riley right now.
Take care,Alan

Larry,
Hows everything going? Haven't heard any reports on Riley or Jake.Hope all is well.
Alan from Alaska