A new season of chukar hunting and a fair forecast.

After the summer of 2013 Jake has been ready to get back to the hills to do what he was born to do. Find birds. Although it was a lot easier having Riley show him and motivate him to get out there a ways it has already been inbred as to what his main focus is on. Birds. The last weeks heavy rains have made it a lot easier to handle the early morning temperatures and cover some country.
First off, the rain has been a real blessing for the birds. I am sure the areas that have burnt will soon be sprouting lots of green shoots of cheat. The birds may not hold real well in these areas but they will still be visiting them for some good nutrition. 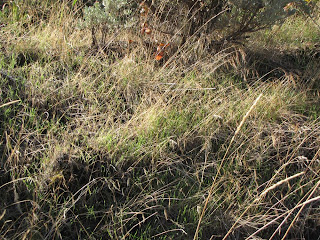 As far as chukars go, I have to say we have seen an average amount of birds in the last week or so of scouting and training. Covey's  ranged from as many as 15 to twenty birds down to a half a dozen or so.  Age of the birds ranged from mature to young only five weeks old or so. In my very unprofessional opinion this year looks to be a lot like last year. Maybe if Riley were still with me I might have a stronger bird forecast. Jake isn't the bird finding machine that Riley was but is getting closer with each trip to the hills.
As far as Jake goes, I wish I was half as lucky at betting on football games as I am with chukar dogs. I'd be rich. His enthusiasm and focus is already bird oriented. He is already pointing and holding point until I get to him. 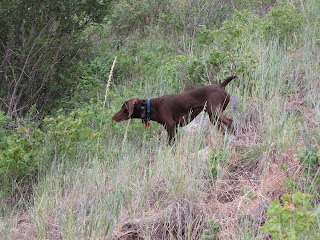 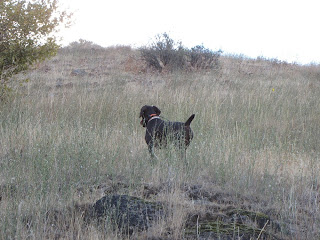 Unless the birds start running, he'll let me go in front and flush the birds which is a problem he'll learn to handle the more we are in the field with birds. Once he scents birds he is very intense on locating the origin and with his inexperience of knowing how to use his nose will sometimes bump the birds. Jakes range is a little shorter than I am use to but I'm sure as he learns to put his nose to the air instead of close to the ground his range will get out there where I'll be cussing his 300 yard point straight up the hill but loving every minute of it. He checks in to make sure I'm not too far away. 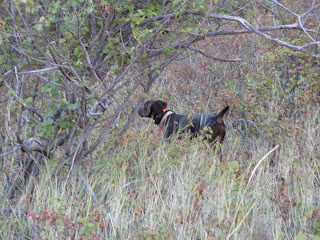 We've been able to combine a couple of training trips with a blue grouse hunt. Jake performed like a champ. His first grouse was off this point and his next two retrieves were from incidental flushes by me. The first bird he was right on top of with his retrieve and after relocating the bird in his mouth several times and spitting out some feathers brought the grouse to me. 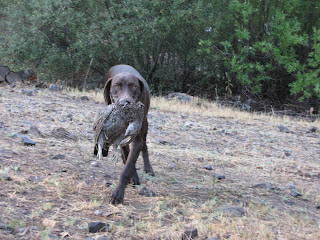 The next two were later and both times he came running back to  me at the sound of the shot seeking instructions. At the command of dead bird he put his nose down and started searching. With help from me moving in the direction of the downed bird and pointing he soon came up with the bird out of the brush. As I mentioned, I am a very lucky man. I have another good companion to spend many enjoyable hours on the hill. He is already a good chukar dog and by the end of this year will probably be another great chukar dog with what the mountain can teach him.
One side note. Jake and I will be going on several multiple day hunts in eastern Oregon and western Idaho. Although I prefer to go off in my own direction, it's always great to have someone to visit with on the ride to and from a hunt or in camp, so please feel free to join us any time and let us know when you might be in the area. We can always adjust camp sites.
Posted by larry szurgot at 9:22 AM

Wow!Jake is coming along fast. He looks like an older dog out there on point and retrieving already. Looks like you have some fun ahead of you this coming season. Very lucky man Larry.
Have fun.
Alan from alaska.101

While my opinion is much more novice than yours, I have similar projections that bird numbers will be similar to last year (which is good enough for me). Jack and I will be doing some multiple day hunts in November and would really enjoy meeting up if possible.

Enjoy the beginning of the season,