Passing of the rock

At the insistence of Barbara and the encouragement of Jake, I am putting Riley's death behind me. I have shed numerous tears over the loss of such a great friend in the last three weeks. Every time I turned around I was encountering a memory of Riley. We did everything together. I have to confess to spending more time with him than my wife since she is still supporting me with a job.
As I was looking at photos today I realized that possibly Riley was passing the torch on to Jake in the form of a stone. Riley had only one annoying habit. He would wade into the pond, put his head under water, blow bubbles and come up with a rock. Usually it was a sizable rock. He would pack it around and drop it at my feet. There were even times when hunting would be slow and he would chase a rolling rock down the hill and bring it back to me. Before Riley broke his leg in May he must have shown Jake this trick. Jake now performs the same trick in the pond and usually with a nice sized rock. He has actually become more annoying with this habit than Riley was. He brings the rocks into the house with him.
This was the last picture I have of Riley. It was taken about a week before Riley left. He was out laying on the drive way soaking up sun when Jake came up with a smaller rock and laid beside him. 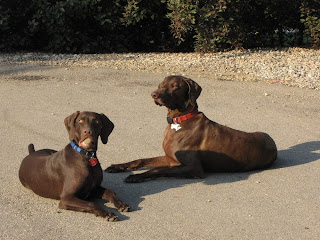 This is now a habit I will cherish forever.
Meanwhile I've been sitting around the house getting in the worse shape I have ever been in and Jake has been staying in shape by being as destructive as he can be. I now know what people mean when they comment on how calm my dogs are and I can state for a fact that it is because we burn so much energy chasing through the hills. Yesterday, Jake tried some more encouraging tactics to get me up on the hill. His encouraging tactics made Barb a little more insistent on me getting up on the hill with Jake . 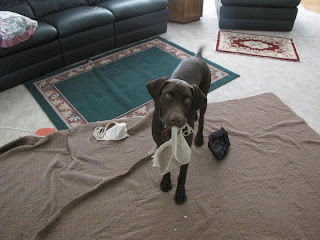 So, starting tomorrow, Jake and I are beginning a full scale attack on the mountains. Hopefully we might find a few blue grouse as we train on chukars, but no matter what we see, we're going to get some of that good blood flowing in our veins again. We are going to leave the sad times behind and get back to posting on great hunting and comical dog events, which I'm sure Jake will provide many of. Heck, who knows, I might even do something stupid along the way. Riley will always be a part of every hunt. He defined what great chukar hunting was about as well as defined me, but we're going to concentrate on the great times and information we can provide. Information to dog owners, like not letting your dog wander through your wife's closet while you're picking your nose. You learn words and things about your wife that you didn't think possible.
Posted by larry szurgot at 4:35 PM

Glad to here your getting back at it, I to have lost 4 legged friends before there time, hard to swallow but that,s the life span god gave our dogs, get out there and hunt them up, best way to restore yourself, sounds like Riley had a great life, what more could you do, new chuks are in the hills begging for you to chase them, get after it, never give in, what better fun is thee, good luck and good hunts from a friend in Nevada, joe

Really a great post Larry. What a great picture of Jake and the rock.Mays,my GSP loves those rocks too. He picks up pieces of coal off the beach so big it makes me laugh.Glad you are getting Jake out for some hunts. He sure is a cute guy. Good luck hunting. Really good to see you writing again.
Alan from alaska