Jake and the ol crippled hunter

In two days Jake will be 10 months old. As with all my pups of the past, he has amazed me with his quick learning and hunting ability. He got short changed a little when it came to training. Riley didn't have enough time to work with Jake and now Jake has a cripple trying to get to him on the mountain. I do the best I can, but I think it's a little much to ask a pup to hold birds as long as it takes for me to get up or down the slopes.

Today I made it even harder on Jake. My son, Doug has a small camera I wanted to try. It's a great camera that has all the neat functions and trick stuff of the big camera's and it fits in my pocket. My normal camera is bigger and hangs around my neck, thus making it harder to take with a gun. As I said, Doug's camera has all the neat features on it, so it didn't take long before I pushed the wrong buttons and it quit working. It wasn't long after it quit and Jake went on a classic point. He had his left front leg bent up and his back and tail were as straight as a level. So from about forty yards I fought with the camera trying to get it to work. I guess it was about ten minutes or so and I gave the occasional glance to see he hadn't moved a muscle. Suddenly, I heard the birds flush. I haven't a clue if the birds got nervous or Jake got bored. Whatever it was, only one half of the team had his head in the game and that half has four legs.

I think the camera is going to be a lot of fun when I learn to use it. Somewhere in this picture is a dog on point. He was behind some sage but I thought I could see him good enough to show up on film. 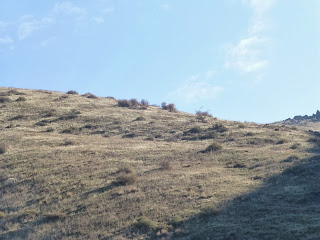 We probably had 10 photo opportunities with points and retrieves but all I got before the camera failed me (or I screwed up) were these two pictures. 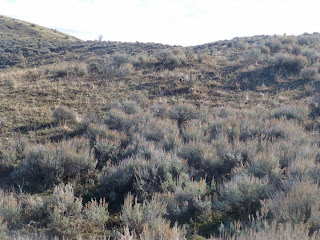 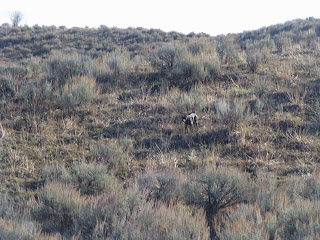 The sad fact about these pictures is that they were about two hours into the hunt. Until than we had seen no birds. We were 1700 feet in elevation higher than at the start of our hunt. Jake was still doing well, but my knee was getting sore and we're now seeing a lot more bird sign. The camera was put away and the points became more frequent. Every point produced birds, but sometimes it took me so long to hobble up or down to Jake that the birds would either flush or be flushed. Each time my eyes were focused on the ground, so I don't know if there was a miscue by Jake or not. Pretty hard to fault a dog unless you know he's guilty.

There was enough good dog work for me to know that next year is going to be loads of fun with two metal knees to get me to Jake. In the past my boys might go two to three times as far as me but today Jake went over four times the distance I did. I made it 6 miles and Jake 27. I gained 2200 feet of elevation and I'd have to guess on Jake's total elevation gain. In other words, with me being inept to technology and a cripple, Jake still has become a pretty darn good chukar hunter. We got home and I took out my old camera to show Jake's success for the day. 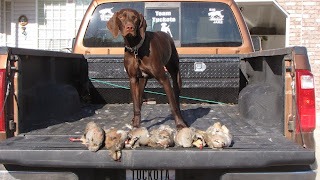 I don't like wishing time away, but I'm already looking forward to spring training with Jake, Two good legs, a great dog and a camera I know how to use is all it is going to take to put me back on top of the world.
Posted by larry szurgot at 5:54 PM

Jake is looking proud of them birds Larry.Have fun.

Good grief, Larry. As Willie the Shake liked to say, "Methinks the chukar hunter doth protest too much." Not a bad box score for a "cripple"! I haven't SEEN as many chukar ALL SEASON as you have on your tailgate! Nice going.