With under three weeks to go until the chukar opener Jake insisted I get him out for some action and work a little summer fat off me. So we picked a few cooler mornings and tried for some grouse. The first morning we went for blues but only got one point. It was a nice adult male that held very tight and helped me start the season with a perfect shooting record. 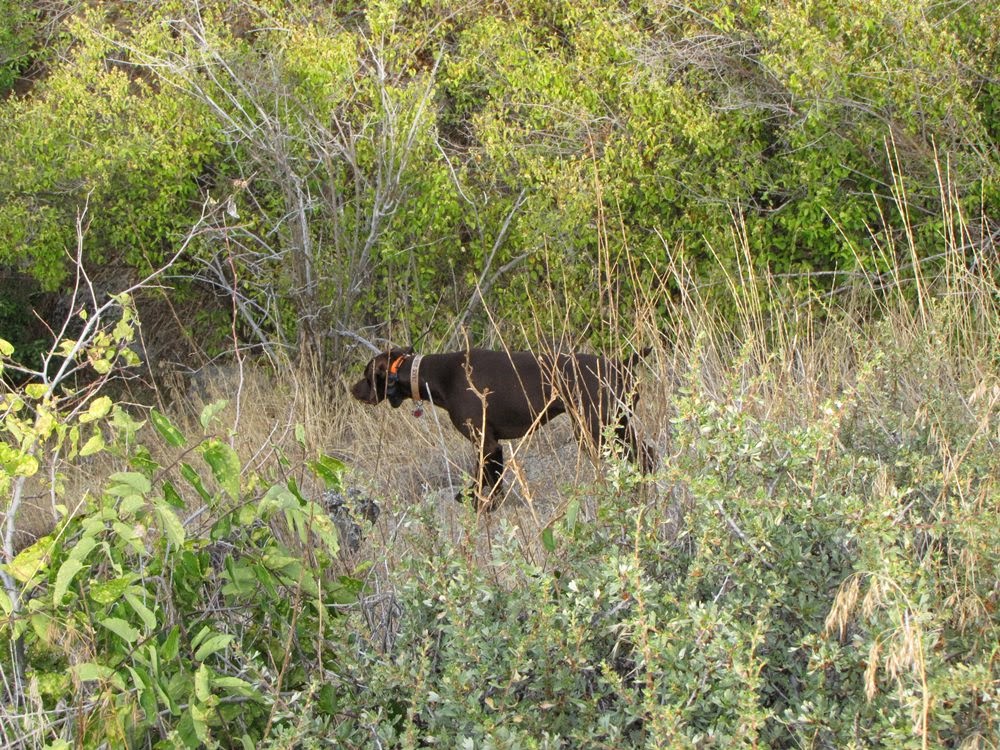 We usually see plenty of blues in this area but not so this year. The good news is that we saw three covey's of chukar and one covey of huns on our way down the hill. None of the covey's were real large but there were enough birds to make me think we'll be having a decent season. I've also been hearing from some other bird hunters of better chukar numbers being seen.

My second outing was for ruffs with Conner. I can't think of a more enjoyable hunt than to watch a 12 year old and a 19 month old dog hunt together for birds. Conner followed Jake like a guide and client and although we had several unsuccessful opportunities the end count was Conner and Jake with his first two grouse ever. 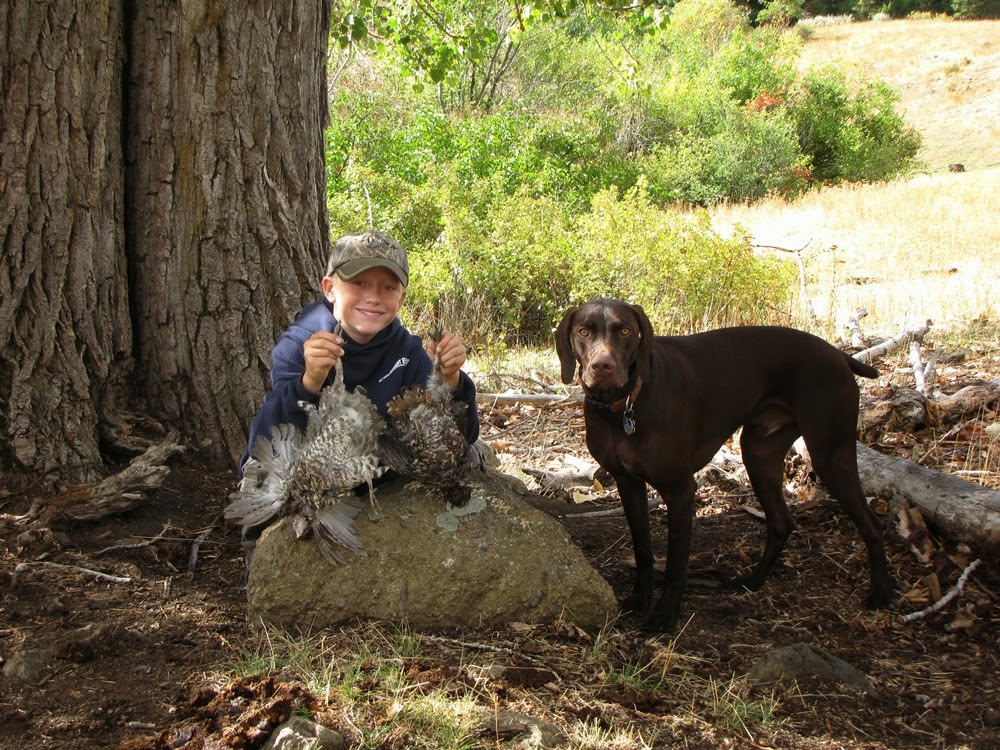 The next day was opener for dove season and Conner loves hunting so I took him out to a spot where I'd seen dove's flying in the past. Jake wasn't invited on this hunt, since the doves aren't much of a pointing bird, but Conner did pretty well without him. 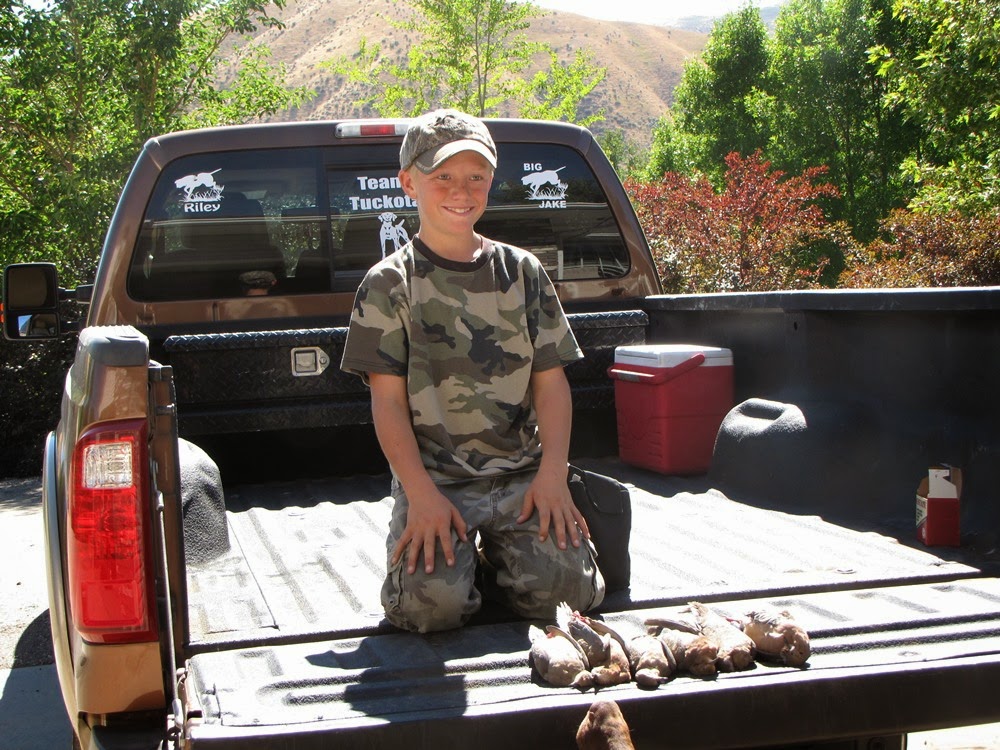 Yesterday found Jake and I back on yet another blue grouse mountain. We found a few more birds and brought a couple of nice eaters home but the most exciting thing for me on the hunt was hearing several chukars welcoming the rising sun and one lone distant bugle of an elk. The season is definitely around the corner and coming fast.

Congratulations to Alan and his dog Mays, in Alaska, and Jordan and his dog Ava, in Utah, on your ptarmigan hunts.  I wish I could figure out how to get your pictures transferred. They would make other upland hunters envious.

As I mentioned earlier, I've had nothing but good reports about the chukar and hun numbers. I think it's going to be another great year to be on the mountain. The numbers may not be great, but there are going to be enough birds to make an eight bird limit possible to those who don't mind putting some effort in. Good luck to those who are going to venture out on the 20th.
Posted by larry szurgot at 8:23 AM

Man I am envious of your hunting days with Conner. That must be pure joy to see him enthusiastic about the outdoors.

Thank you. You are absolutely right about the joy Conner brings me. His enthusiasm has me doing things I haven't done in years and enjoying the heck out of it. I forgot how much fun it can be doing something as simple as trying to catch a lizard.

Larry,
Great pictures of Conner and Jake. Glad you could take the boy hunting . I wish you could get those pictures up on your blog too. I have not been able to post them on Upland Idaho this time around. Someone smarter than me will have to coach me through it. I'm trying to work in another float plane trip before the snow flys. I love it at Upper Hazel. Such a awesome place. Take care. Alan

Update for your readers. Was scouting Brownlee yesterday, and noticed that there were pockets of the Blue Green Algae floating on the lake and in the bays. Please keep the dogs safe, I have first hand experience of what this can do to dogs. Also, Heat, around 90 Degrees Saturday, Sunday. Lets not loose any dogs, Chukar hunting is 4 months long and there are plenty of 50 degree days to hike mountains just around the corner, and those hikes are much better when enjoyed with your 4 legged friend.