My computer is back and I'm ready to bore you some more. The bad news (for me) is that I've lost all my notes and pictures from the past five years. All my hunting pictures of Riley and Jake are gone. All of Conner's (my grandson) hunting accomplishments are gone. Everything is gone, except for what I have posted on this blog. The good news is that I have a better reason to get out there and hunt some more. I need proof.


So, I waited for what I thought was reasonable amount of time for this snow storm to retreat. I know it's still awful cold, but I figured the sun would have melted most of the snow off the southern slopes so I headed for chukar country early this morning. I have to admit to a little disappointment as I approached my hunting area. The first hill looked more like a ski slope than a hunting area. 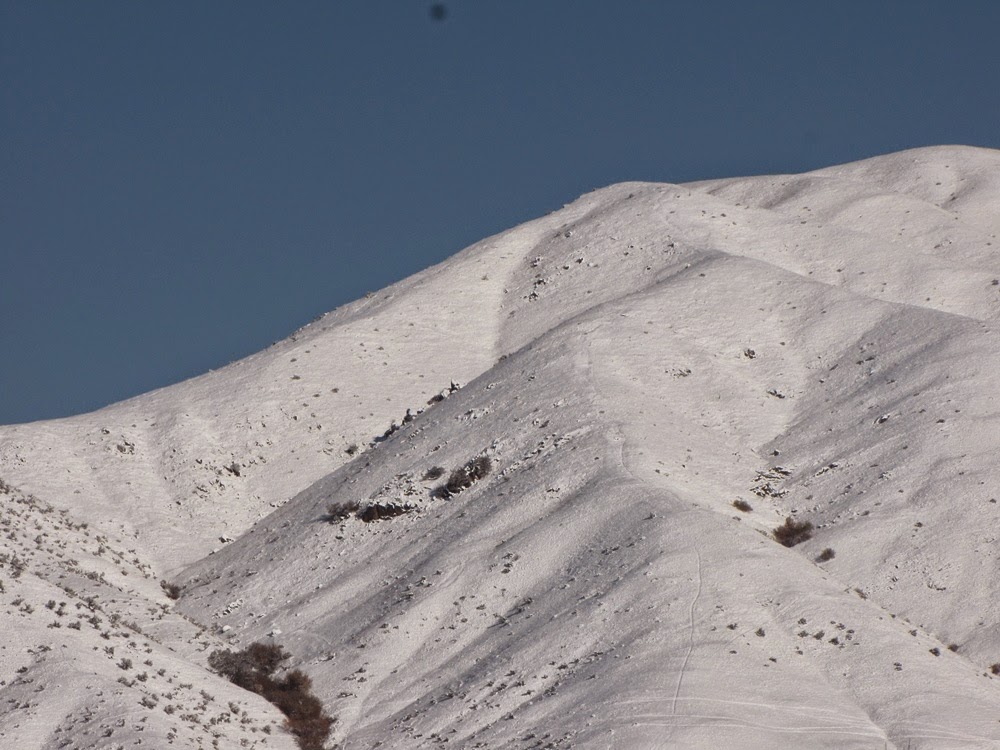 I suddenly wasn't sure I wanted to do this, but decided to drive up the road a little further. The draw wasn't looking much better as I meandered up. 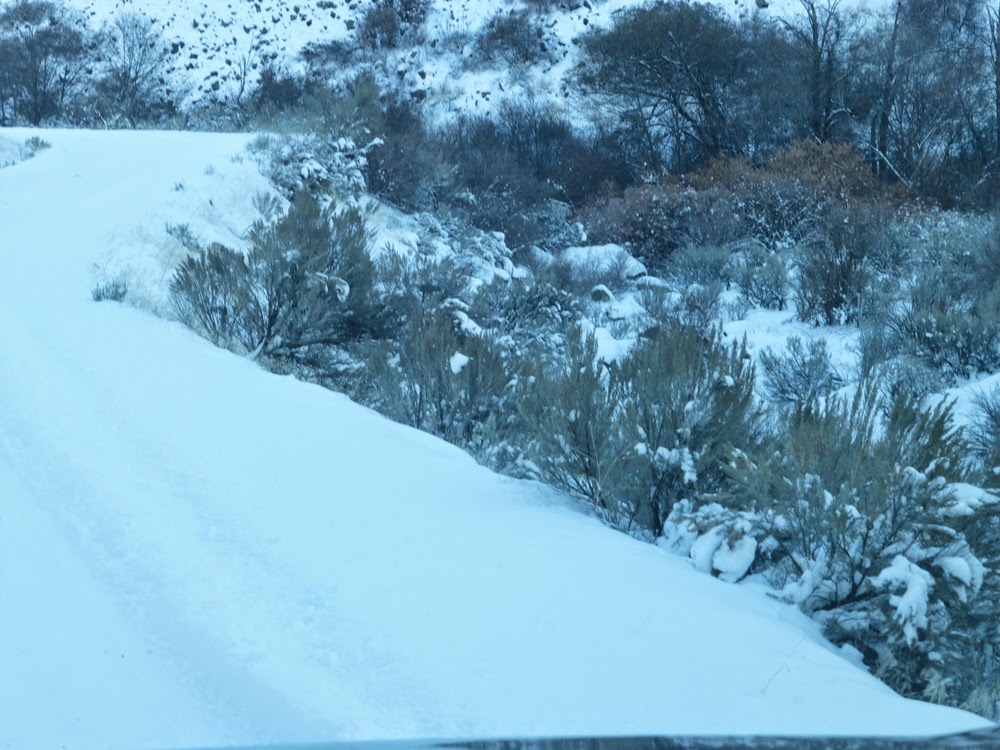 I finally found a decent place to pull off the road.. Even though I knew the snow would not be as deep up higher on this southern slope I wasn't to excited about heading up. It just looked cold out there. 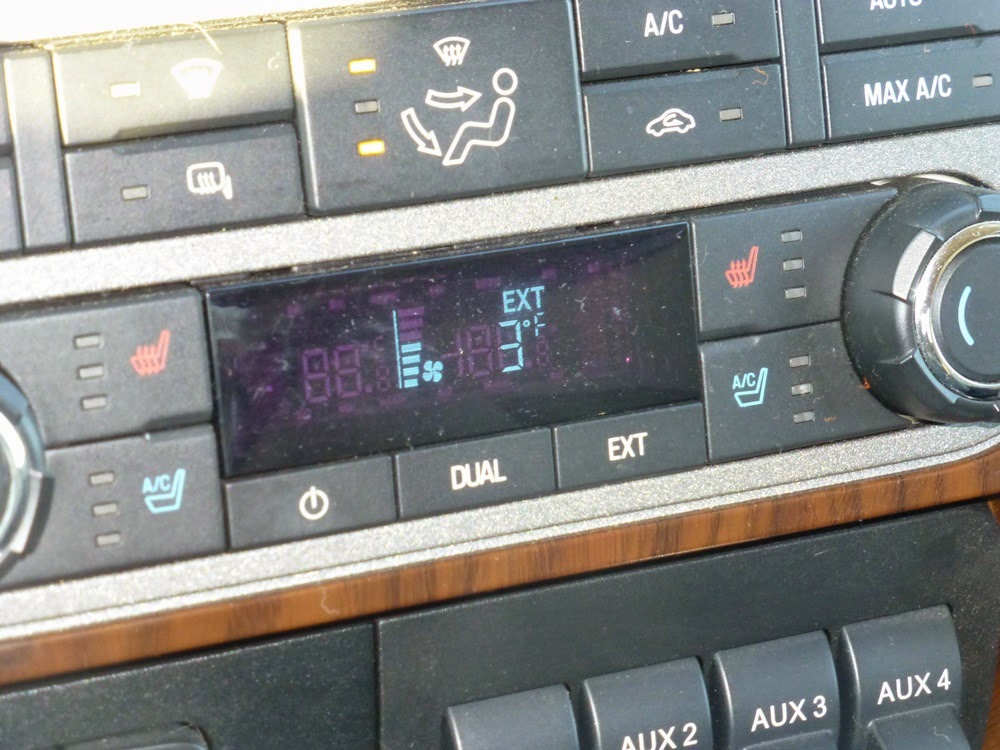 Jake immediately headed straight up the mountain. He had five days of pent up energy to start releasing. As I was unloading his water from my vest, I could hear chukars talking somewhere up above. I was pretty sure Jake had picked up on them also. A couple hundred yards up the hill I decided to hike a trail up the draw rather than go straight up like Jake. The snow was deeper but it was a little less steep. Shortly, Jake joined me about 100 yards up the draw. He got all excited, making a few short points and then reestablishing. He finally looked back at me as if to say, "hustle up here, they're all over the place". 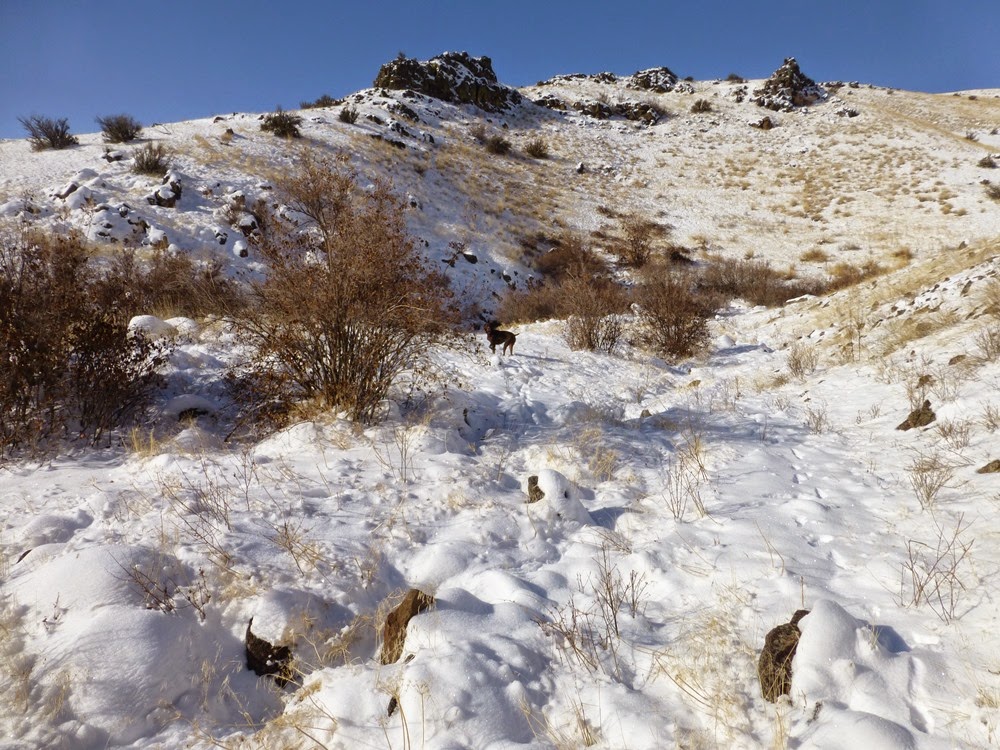 I didn't get too excited because I had already seen that they were quail and a bunch of them were right here about twenty yards from me. 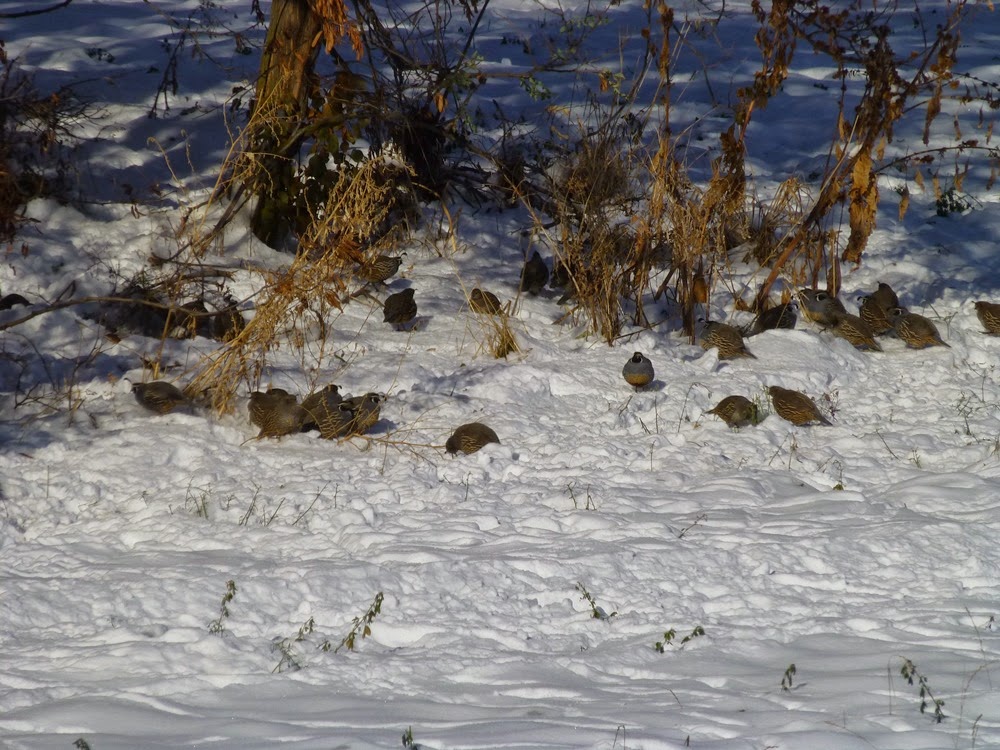 We finally got to a point where it was more advantageous to get out of the draw and walk the steeper burnt off hill. Besides, that's where I thought I had heard the birds earlier. The breeze was blowing quite a bit heavier up at that elevation and Jake was loving putting his nose into it. I wasn't too excited about the way my cheeks were starting to feel but Jake was covering the hill like he knew something good was there. And as usual, he was right. As he hit the ridge he sucked in the cold air and pointed the fine smell. 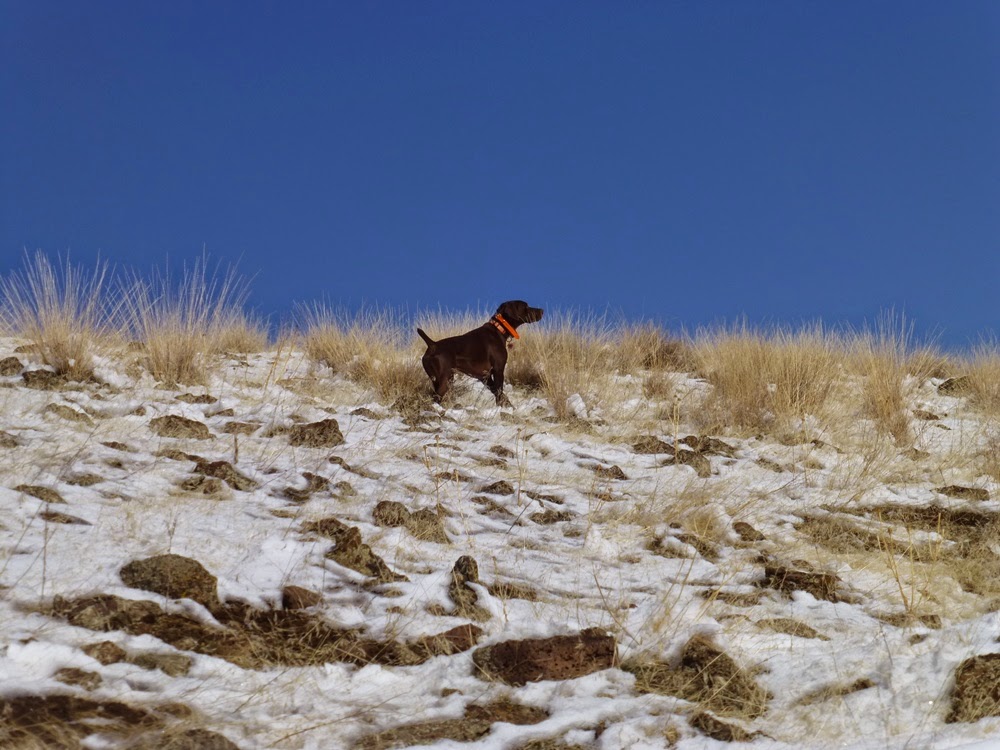 Now it was my turn to be impressive. I've been wanting to get some good pictures of the birds flushing and here was a great chance. Heck, Bob McMichael's wife, Leslie does it all the time. So, as they flushed I snapped a picture of the covey. 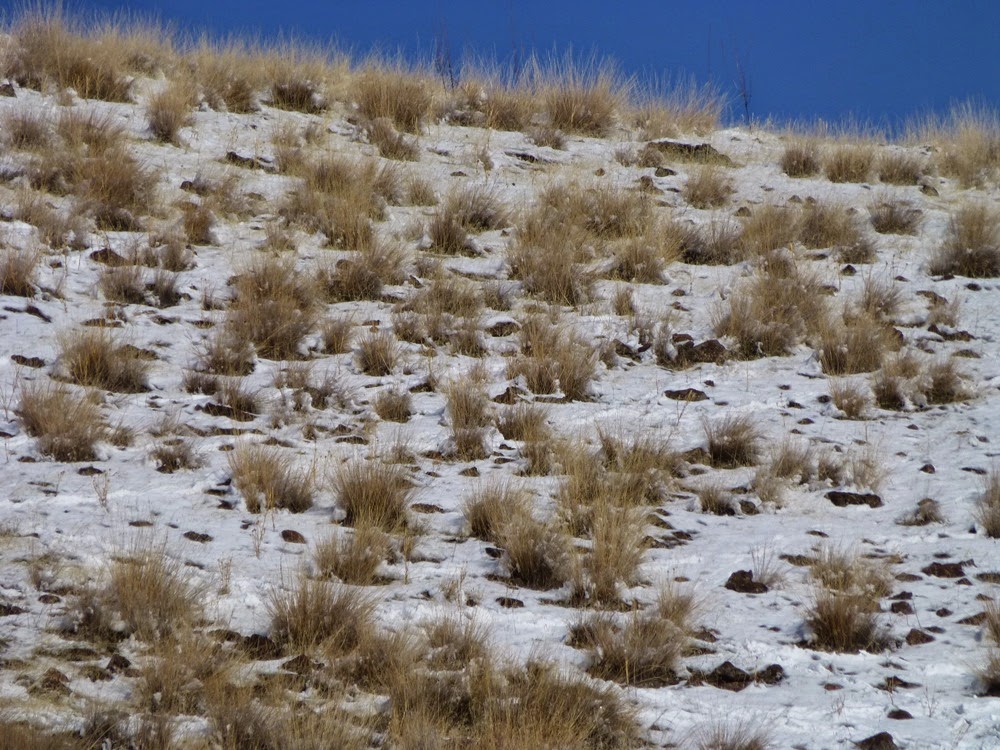 I obviously am as good with a camera as I am with a shotgun, always behind the birds. Luckily for me, there was straggler that gave me time to put the camera away  and provide me with an easy left to right shot, making Jake happy to get a bird in his mouth again. I'd have gotten a picture of his retrieve but my gunshot interrupted some other visitors to the semi burnt ridge which I decided to snap shots at. 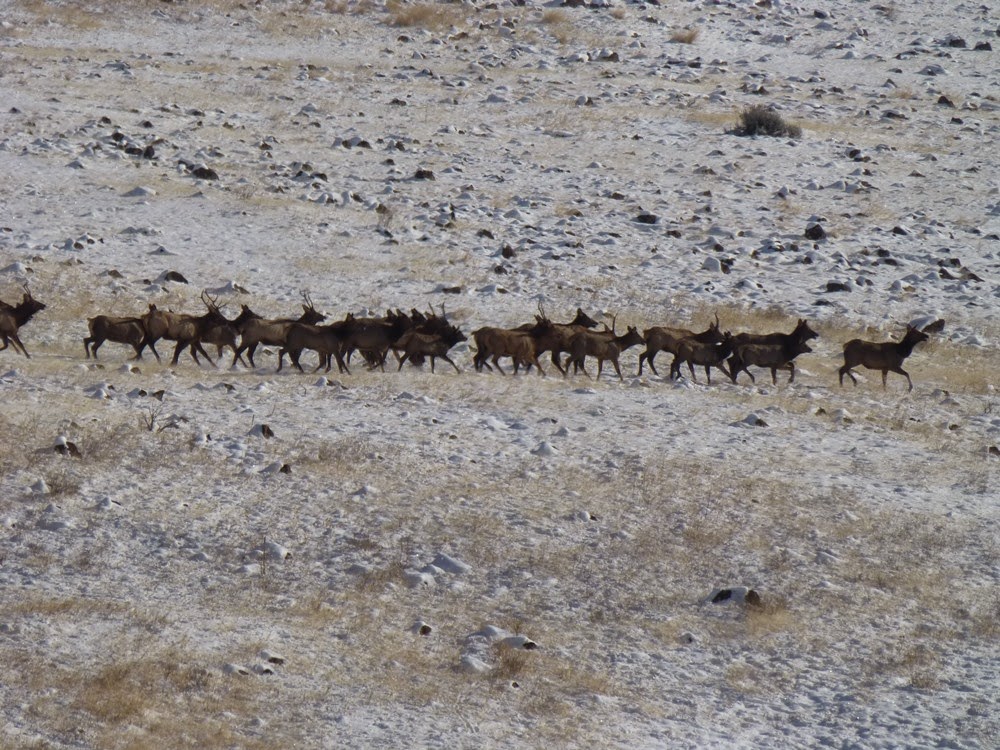 I'll let Leslie take the pictures of birds in flight and I'll focus on animals that can't get off the ground.

The rest of the morning had a few good points but I decided to concentrate on the gun and dog. Truth is, my fingers were getting too cold to take my gloves off anymore. After three hours on the hill and the breeze picking up, I decided we were close enough to the truck to call it quits. While walking the tire tracks back to the truck, Jake locked up. I was sure it was the quail so I approached his point with my gun broke open. Yep, out of the deep snow flushed a chukar. Jake looked at me as if I was as stupid as I felt. I thought  I'd take a picture of where he flushed and show Leslie that I could at least get wing action in the snow. 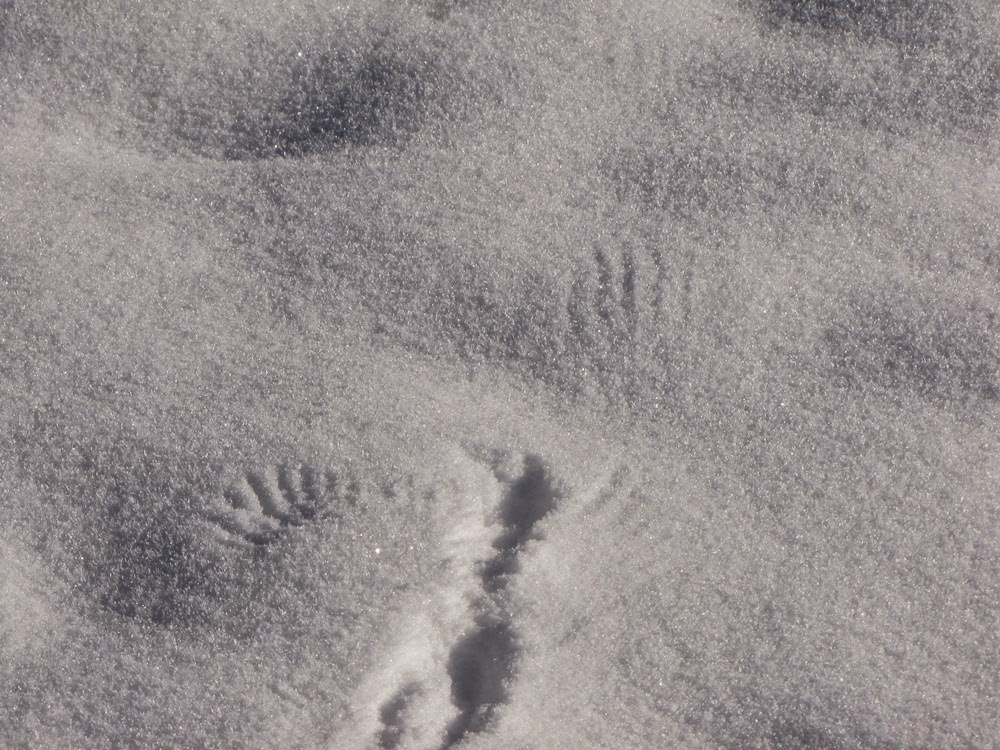 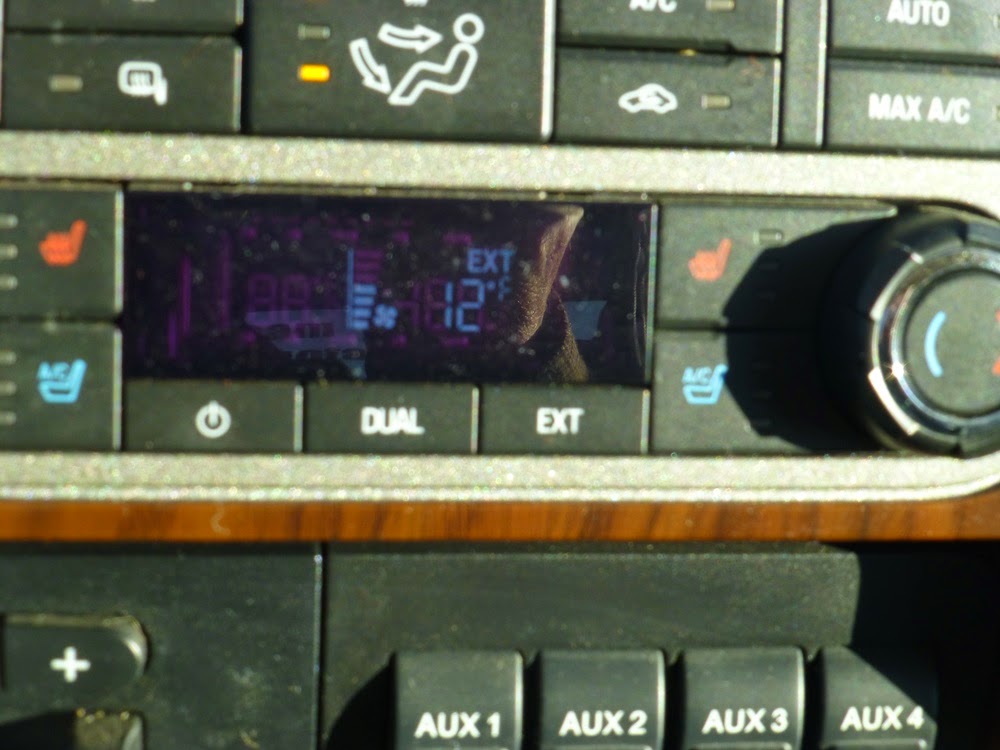 To top the day off, when we got home the neighbors lab came over and started running laps with Jake. He didn't even act tired. The lab's owner walked over to me and said, "are you alright, you look awfully stoved up"?
Posted by larry szurgot at 5:45 PM

Welcome back. I lost items on my computer awhile back so I know how it feels. Looks like you have our Alaska weather down there. It adds a few complications but I never have to pack water as Mays eats the snow.53 degrees here yesterday and no snow on the ground Go figure . I've been chasing grouse and picking up a few. Glad you are getting out with Jake. I bet you are enjoying your new rig. Take care. Enjoyed the pictures and report on your hunt.
Alan and Mays.

Nice! I'd have to say I don't blame the pup. That's cold.